After the Jets cut Decker on June 12th after failing to find a trading partner and option, we knew it would only be a matter of time before he landed somewhere. And here we have it, as Decker signed with Tennessee a few days ago in a contract of 1 year for $5.35 million. 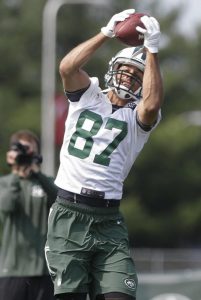 Almost immediately, Decker seems to love the fit, calling his union with the Titans a “perfect storm”. I can’t help but agree.

There are a lot of things to take away from this move and how it impacts Tennessee’s offense.

First off, let’s look at the addition of Decker to this Titans offense. Decker can now finally get into an offense that features a firm QB situation at the helm with 3rd-year arm Marcus Mariota. No more are the days of receiving passes thrown by the aging Ryan Fitzpatrick or the wildly inconsistent Geno Smith, or even the possibility of Bryce Petty or Christian Hackenberg. Hell, I would rather have Tennessee’s backup in Matt Cassel over these other options currently.

Decker can fit into the offense in more ways than one, and aside from the fact that Mariota does a very good job at spreading the ball around to his guys, we can assume that Decker will find a huge role in the redzone, and more importantly, in the slot, where he played most of his snaps in during the 2016 season. Mariota was also a fantastic QB in the redzone, where Decker was very active in during the ’16 season as well. These are things to get excited about, and to focus on during the season.

However, there are a few issues here. In a perfect world where good things happen to us, Decker would be the primary read for Mariota, where in addition to his redzone efficiency, he would receive the bulk of Tennessee’s targets. But he’ll have to share space with Rishard Matthews, Delanie Walker, Tajae Sharpe (if he can can avoid prison, hahaha), and rookie Corey Davis and Taywan Taylor. Like I said earlier, Mariota does a very good job of spreading the ball around, but I would easily feel better about his 2017 outlook if this receiving corps wasn’t so crowded. The other thing to keep in mind is that, while he is only 30 years old, he’s coming off of offseason hip and shoulder surgeries. That’s never a confidence builder, but it isn’t the worst thing in the world.

Looking at the rest of the Titans offense, it’s time to get excited for their 2017 outlook. With all these weapons, I’m more than happy to take Mariota at his current ADP of 121st overall, or the 14th QB off the board. His ADP will likely rise once the news of Decker fully settles in, but this offense is built around Mariota, and if I can build a balanced team with a value QB that can do damages to opposing defenses with both his arm and legs, I’m a happy camper. As for the rest of the offense, I still want to invest in DeMarco as the lead back, Derrick Henry as his handcuff/change of pace (it’s likely he won’t get much action unless DeMarco goes down because I doubt with this much talent through the air that they will roll out packages with 2 HB’s or even enough packages for Henry to get involved), and I still want a piece of Walker and Matthews. Decker’s arrival won’t take away that much from the two, and I still want them at their given prices. I still probably won’t be taking Corey Davis, but I could be wrong as we move along into the summer.

A lot will change over the coming weeks and months, but as of now, I wouldn’t even hesitate to select Decker at this current pricing point, and to solidify my team’s WR depth with an excellent WR4 or 5 selection.