Indiana Jones measuring the exact amount of sand needed in the sack to swap with the idol in Raiders of the Lost Ark, a Bb, C, Eb, and then bending that F twice on Marvin Gaye’s “Let’s Get It On”, or the “In my younger and more vulnerable years my father gave me some advice that I’ve been turning over in my mind ever since.…” from The Great Gatsby: a great start cannot be underestimated. Since you are here, no, I am not trying to give you a tenth-grade literature lesson. Yes, I am applying this to fantasy football. However, if you have never read F. Scott Fitzgerald’s classic novel, you should. It is the second greatest thing a Fitzgerald has done after only Larry Fitzgerald’s 64-yard touchdown reception in Super Bowl XLIII.

A great start out the gate can set the tone for your season. There are few worse things than trying to play catchup on a 1-3 record. One of the factors to take into account when setting any lineup are your player’s matchups. When I am looking at those matchups, I go a little deeper than is it a “good defense” or “bad defense.” Simply you could have a player facing a great defense against the run, but they may give up a bit more to the pass. So I like to take positional matchups into account a little more. Basically, what teams give up the most fantasy points to a single position. Over the next five weeks, I’ll be breaking down players and teams who have exploitable matchups to start the season. I’ll also go into some matchups I’d rather avoid.

This week we are starting with the quarterback, the proverbial captain of your fantasy team, your Jay Gatsby if you will (or was Nick the main character? Maybe I need to go back and read too). Quarterbacks are the first matchups I like to look at since they can definitely indicate where game script may be headed. Also, through the season it is the easiest position to stream from the waiver wire. The position tends to have a ton of depth in standard one quarterback leagues which means there are often good streaming options available to pick up. Just last season Cam Newton was the QB3 through the first two weeks of the season and had an average draft position of 120th. Those games came against the Dolphins who came off a 2019 season giving up the 2nd most fantasy points to the position and the Seattle Seahawks who ended 2020 giving up the 8th most fantasy points to quarterbacks. Below is a chart of the team’s first four weeks of the season, where those opponents ranked in allowing fantasy points to the quarterback, and the average ranking of those teams. 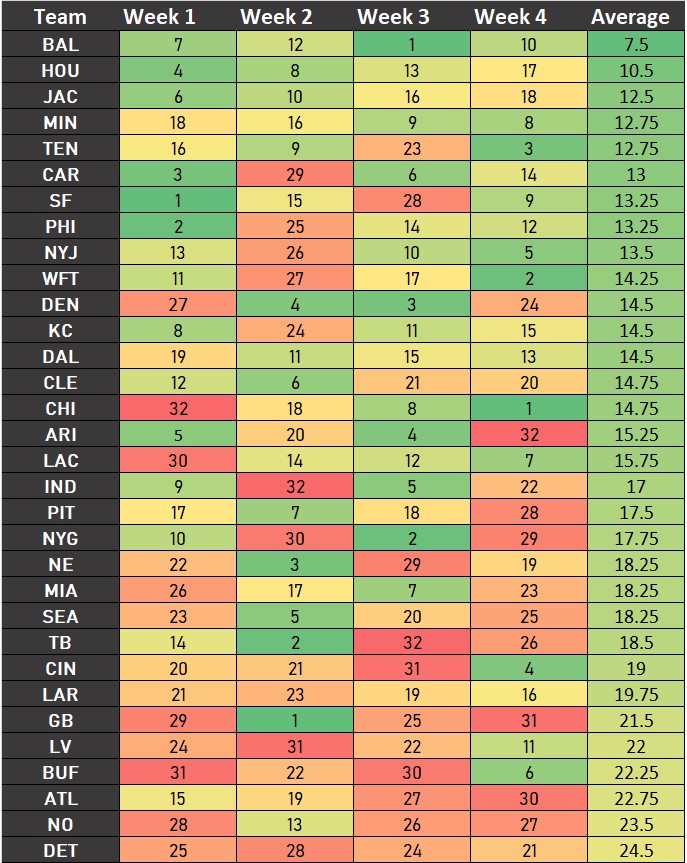 Lamar Jackson is currently going as the fourth quarterback according to the consensus average draft position, but has every chance to end up as the best quarterback in fantasy. His season begins with matchups against teams that gave up an average of 20.9 fantasy points per game in 2020, which is the best start for any quarterback heading into the 2021 season. Jackson is not just any quarterback though since he runs on average 10.5 times per game. Those four matchups are also against teams among the eleven worst against the run with an emphasis on the Lions who gave up the most fantasy points to running backs and the Raiders who allowed the fourth-most. If you are looking to draft a top-five quarterback in this year’s draft, Jackson’s first four matchups are, well unmatched.

Kirk Cousins was quietly a top twelve quarterback in 2020, but is currently being taken outside the top fifteen quarterbacks. This means you should be able to get him late on draft day and then lean into those first few weeks. Cousins was incredible in the final stretch of the season averaging over 27 fantasy points per game in six points per passing touchdown leagues. His first two matchups of the season do come on the road but are both potential shoot-outs versus the Bengals and Cardinals high-powered passing offenses. He follows those matchups with a three-game homestand against the Seahawks, Brown, and Lions’ vulnerable passing defenses. For those people who like to stream quarterback during the season, Cousins is the perfect late-round quarterback to start with.

Ryan Tannehill also seems to be going later than where his ADP says he should be going. He finished the season seventh at quarterback, but is going as the eleventh quarterback off the board. This seems very low considering the major upgrade he got at wide receiver this offseason in Julio Jones. With Jones and A.J. Brown on the outside, we should already consider the secondaries of the Cardinals and Seahawks, who ranked in the bottom half of the league, torched. He does draw the Colts top ten rated defense in Week Three, but follows that up with a visit to East Rutherford in Week Four and Jacksonville in Week Five. The Jets and Jaguars gave up over 22 points per game in 2020, ranking third and fourth-worst against passers. If Tannehill can bring back some of his top-ranked under pressure efficiency from 2019, he could be flirting with a spot in the top five at the position.

It is not an encouraging sign, adding into an already bleak 2021 outlook, when you see your best matchup in the first four weeks of the season is a divisional matchup away from home against the Chicago Bears. Prior to Week Four, Jared Goff faces three teams who gave up among the eighth fewest fantasy points per game to his position. Goff is with the Detroit Lions after starting for the Los Angeles Rams for the better part of five seasons. This means he will be starting in a brand new system with receivers he has never thrown to prior to training camp. It is not until Week 11 where Goff’s schedule starts to open up, but by this point, you should be lounging on the wavier wire if your team is in desperate need of his services.

I have no idea who New Orleans is going to roll out with to start their season at this point. Whether it’s Jameis Winston or Taysom Hill, I am benching both to start my season. Other than Detroit, they face the most difficult early schedule when it comes to teams against the pass. It doesn’t begin to lighten up until after their Week Six bye week as well. I would not be surprised if coming out of that bye we get a switch from Taysom to Jameis or vice versa due to performance. We have seen how valuable Winston can be for fantasy from his time in Tampa Bay where he finished his last season there as a top-five fantasy quarterback and threw for over 4000 yards in three out of his five seasons. Hill is a bit more of a question mark, but in the four games he started and finished in 2020, he averaged 21.5 fantasy points per game. The Saints’ schedule after the bye is very favorable and while I don’t like their first five matchups, picking up the New Orleans quarterback during their bye week and watching what happens might be one of my favorite early season strategies.

It is hard for me to recommend starting a player, let alone a rookie, against the team who allowed the least amount of points per game to quarterbacks in 2020. Instead, I am going to recommend finding a cheap replacement for Week One, Sam Darnold, Ryan Fitzpatrick, and Ben Roethlisberger are all options with good to great first-week matchups, and then rolling Fields out in Week Two. The Chicago Bears didn’t trade up nine spots in the 2021 NFL Draft to bench Fields and I think we see him on the field in the Bears’ home opener against Joe Burrow and the Cincinnati Bengals. From there the Bears get exceptional matchups against the Browns, Lions, and Raiders to showcase their new franchise quarterback.

In my previous, Quarterback Tandems article, I covered quarterbacks you could use season long as a duo throughout your season. Well, now I am going to refine that into more of a streaming recommendation for those first four weeks.  I am a big proponent of waiting on quarterbacks in drafts since there is always value late and then later found during the season on the waiver wire. Imagine a week one revenge matchup for Sam Darnold against the Jets, a Cam Newton Jets matchup where he averaged 30.9 points across his two 2020 meetings, and a Darnold tour of Texas against the depleted Houston Texans defense and potential Dallas Cowboys shoot-out to start your season. It is the exact start you look for when choosing two late quarterbacks to start your team. Looking season long, it is a duo you can absolutely roll with assuming Mac Jones doesn’t supplant Newton in New England. So while it is a first four-week recommendation, it can sustain you the entire season as well.

Next week I will be covering running backs who have great starts to the season while also focusing on some matchups you may want to avoid. In the meantime, let me recommend you check out the Razzball site tools created by Rudy Gamble. There you’ll find everything you need to master your draft rooms, project players, and win your fantasy leagues. We are offering a free three-day trial of both our Roto and DFS packages to help you start your fantasy season on the right foot, or left foot if Sebastian Janakowski happens to be reading this article. As far as the previous literary recommendation from this article, The Great Gatsby is available at Target for the low low price of $4.49 or hey, visit your local library and check it out for free! 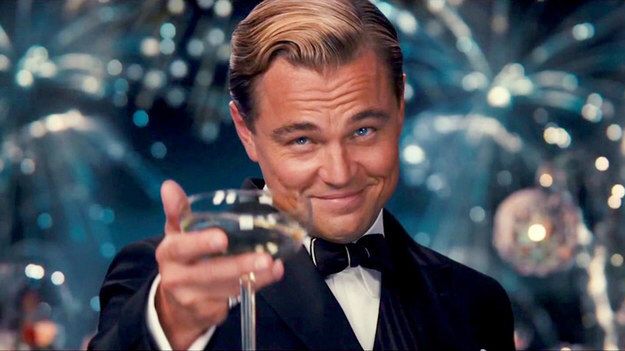