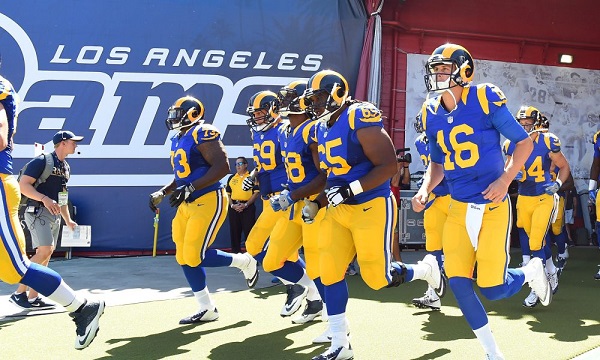 Everyone knows the Rams moved from St. Louis to Los Angeles in 2016. Not everyone knows that yours truly did as well. And no, I did not follow the team to LA. I’m no Rams fan; for that matter neither were most of my friends and associates in St. Louis, and even if they were, it wasn’t like the love they showed for the Cardinals. The Rams didn’t have a good setup in the Lou; no tailgating, crappy stadium, bad location, terrible team. I’m not at all surprised they moved, and I doubt many have noticed in that baseball town.

Not surprisingly an embarrassing first season in LA led to poor fan support at games however things are looking up this season. Funnily enough, in either market, if the Rams put a good product out on the field people will go, and people are going now, to see the Goff and Gurley show. But before we get to the fun let’s just reiterate the rules: This is Free Agent Auction Bidding. Or FAAB for the faabulous ones, and we started the season with $100. By now we should have less. How much? I have an average of $25…

Jared Goff ($9) – The Rams QB leads the adds this week. Quick aside, it’s a pretty piss poor pot to piss in week for adds, and that’s not my fault, that’s the NFL’s, so blame them. If you’ve been a faithful reader, it’s all bronze everything.

Now back to Goff. He’s been mentioned here before due to his upside and his schedule the rest of the way; he gets the Giants this week and has favorable matchups except Weeks 11 @MIN and 15 @SEA. It is interesting to note that Wentz and Goff appear to be taking the [fantasy] step forward before Mariota and Winston, who were drafted based on the breakthrough and they’ve shown only flashes of follow through this season. Give me Wentz and Goff going forward.

JuJu Smith-Schuster ($7) – same problem that Martavius eventually ran into he’ll figure out; AB gets his, and scraps are left. Let’s not go crazy here.

Alex Collins ($7) – He’s a starter at least until West is back and looked good on Sunday and…Running Back is barren wasteland.

Marlon Mack ($7) – He’s mentioned here I mention him every week but if you’re still waiting now may really be the last chance. Seriously. Probably.

Paul Richardson ($6) – What a game on Sunday, He’s (apparently) passed Lockett but he’s still behind Baldwin.

Jimmy Garoppolo ($5) – The 49ers are not very good. The Patriots just traded him so now Tom Brady (fortysomething QB) has no backup and my question is how much did New England really trust Jimmy G? Answer: enough to trade him for a 2nd round pick.

Cooper Kupp ($3) – Goff’s favorite target is still out there in many leagues. He’s great for depth and you may be starting him come fantasy playoffs (but probably not week 15).

Dede Westbrook ($3) – He’s on the Jags, coming off IR, and is a lottery ticket. You feeling lucky?

Robby Anderson ($2) – To fill out a bench. Really if you’re going to spend $2 on a guy, maybe wait and see if he clears waivers.

Lastly: Being a relatively new resident to LA, I went to Venice Beach for the first time this past weekend…and it was all I thought it would be; which I find to be rare. How often are we under or over whelmed by a place we’ve built up in our minds? I didn’t have great expectations for it even though it was entertaining. I heard it described as a third world street in a first world country. I’d say second world, but still. If you’re in the area, and have some time to kill, I’d say go to Santa Monica, but if you’ve been there already, and want to get a little scummy, take a trip down Venice Beach.