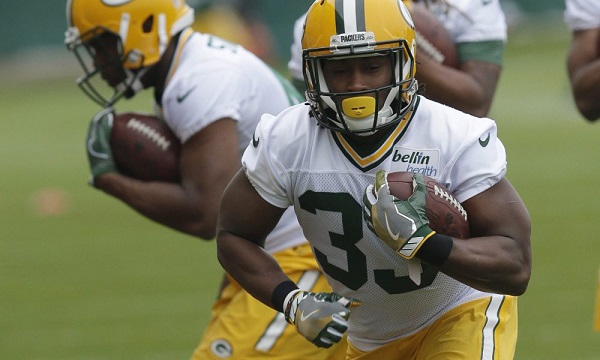 We’re jumping right in, so let’s get to it, and here we are adding a little power to it. The best of the Free Agent Auction Budget Week Eight!

Aaron Jones ($35) I’m spending (almost) the rest of my money on him. He looked great on Sunday and should be the lead back. Until Ty Montgomery comes back next week and owns it, that is, because it’s been that kind of a season. I’m not sure if it’s getting older but as a Bears fan since birth I just don’t hate the Packers with the same gusto I did as in my youth. I combine it with fantasy sports (in my early years I actively avoided drafting Packers, which was made simpler because Favre was easy to hate; Rodgers not so much) and the Bears being terrible for decades now (a subpar Super Bowl appearance notwithstanding).

Latavius Murray ($17) Jones is owned in a good amount more leagues but I’ll be damned if Murray gets two ledes this season. If he’s available and you want to take a shot thinking he’ll be the top dog in Minnesota then pay a bit more. I’m not going to because, you know, fool me once, and not getting fooled again by meeting the new boss same as the old boss. Also McKinnon is still a big part of that offense.
Marlon Mack ($13) He’s been in this space before, so you should own him by now, and if you don’t own him, you may never ever ever own him.
Jared Goff ($12) It’s a bye week for him and the Rams this week but say you are a Rodgers owner, or a Mariota owner, or hell, even a Brees owner who needs a fill-in when he’s on the road then look his way because week 9 he gets the putrid Giants and only has two awful matchups the rest of the way.
Kenny Stills ($11) He had quite a week and that makes me wonder where this Dolphins passing offense has been (and don’t say Matt Moore because Cutler looked better too); if either QB can get Landry and the receiving core going next can we do the same for Jay Ajayi? Please?
Tedd Ginn, Jr. ($10) It’s surprising Ginn has such a long career because he can’t catch, right? Weird.

Bronze (not as shiny):

DeAndre Washington ($6) and Jalen Richard ($5) Completely need based (week 8 only edition). See, in some leagues, I need them, and so then I pay a bit more. In the leagues I don’t, I don’t put in a bid. Comprende? Also, since it’s not a great matchup in Buffalo, I lean a pass interference-down-at-the-one-Washington TD run over a long Richard run.
Chris Ivory ($5) Insurance for the Fournette owner, and I don’t trust him. Or Yeldon. So there.
Tyler Kroft ($3) Do you need a fill-in tight end? Or are you just sick of the one you have? Look this way, as Kroft has a good matchup against Indy this week.
OJ Howard ($2) Howard and Cameron Brate could give Jamies Winston a poor man’s version of the Gronk & Murderer Patriot pairing from a few years back. Brate is the better one each week (though in dynasty leagues Howard has major upside) but let’s not go crazy over O’Terrius Jabari just yet.
Jordan Matthews ($2) He’s a stash on your bench in 12+ leagues, same as the next guys.
Bennie Fowler ($2) Is Sanders still out? Maybe, though even if not, Fowler’s a stash/fill-in.
JuJu Smith-Schuster ($2) Martavius isn’t on his way out, or is he?
Kenny Golladay ($2) Where did we last hear his name? Oh yeah, after a bust out Week 1. That doesn’t feel like seven weeks ago, does it? We’re half way through, dang it I didn’t even realize (or want to either). Anyway, Golloday has been hurt though is on pace to return after a bye plus Golden Tate has a shoulder that’s bothering him.

$2 Defenses: Cincinnati vs the Colts. Philadelphia vs the 49ers. New England vs the Chargers.

Lastly: I was traveling on Sunday and was lucky enough to watch the early games at the airport bar followed by on the plane – my first JetBlue flight and it was definitely worth the extra $10 for leg room. Also cool to sit next to two other football fans. We had the better game on the center seat TV (which was not the Browns-Titans, the OT was starting as we were boarding andI watched as little of that as possible. I feel so so sorry for those fans that had to watch that whole game. Really, they must’ve ruined your Sunday; even a Titans fan can’t get those three hours back). Flying made a little better by football. Until next week, keep those wheels of steel rolling!