Trying to figure out rankings in the NFC East is no job for amateurs. And let’s just say I’m no expert. First, you have Washington pulling off their own little Super Bowl by coming back and beating the (GASP!) Tampa Buccaneers and moving to 3-4. Then you have the Giants being gifted a win by the video game known as Casselvania. (I knew Romoitis was a terminal illness, but I didn’t realize it was so contagious as well. Unfortunately, Matt Cassel looks to be in the late stages. Very sad. Surprising too, as you don’t usually see Romoitis without Romo involved. Maybe it was a pre-existing condition? Thank goodness we have Obamacare folks.) And then you have the Eagles losing to the Panthers on Sunday Night Football, because the quarterback they have is better at throwing lateral yards than forward yards. I’m telling you, even with a day filled with terrible officiating, the rest of the AFC South getting embarrassed (around the world this week! Making sure that soccer remains the most popular sport in the world…), an unfortunate season-ending injury to a NFL star running back, nothing can compare to the NFC East trying their best to out-derp each other on the way to the division title. The best part of it all is that one of these teams will be actually going to the playoffs… imagine that . It’s like a dream come true…

Want to win a Razzball T-Shirt? Try out our new Fantasy Football Team Name Generator and post your favorite below in the comment section. We’ll select a random winner this Thursday!

Tom Brady – 34/54, 355 YDS, 2 TD and 4 CAR, 15 YDS, 1 TD. I like how the Patriots have basically decided that on most occasions, no run game is necessary. It’s almost as if the NFL has put so much emphasis on protecting the passing game that the Patriots have figured out a way to take advantage of this. I’m completely surprised this happened guys. UNFATHOMABLE.

Matt Cassel – 17/27, 227 YDS, 1 TD, 3 INT and 1 CAR, 4 YDS. More like Matt Casselbeck, amirite folks? Honestly though, say what you will about Cassel, he didn’t throw one interception when handing the ball off to a running back… So, what’s the odds that they’ll bring Tony Romo back before he’s fully healed, he re-injures himself, and the Cowboys don’t win another game this season? I’m only asking because Fox Sports asked Romo during the game, and he said he’s back next week. Get yer popcorn ready!

Amari Cooper – 5 REC, 133 YDS, 1 TD. I pretty much mainlined paint thinner into my eyeballs so I didn’t have to watch this game anymore. Oddly enough, that’s also what the majority of Raider fans did to celebrate.

Zach Ertz – 5 REC, 63 YDS. I wonder if Zach Ertz’s real first name is Richard… it would make a lot of sense.

Arian Foster – 18 CAR, 59 YDS, 1 TD and 5 REC, 66 YDS, 1 TD. How’d Houston wind up scoring 26 points? I only ask because I’m more surprised at that then Foster’s annual something exploding. Late in the fourth quarter, while down 44-20, with all their starters still in (after initially trailing 41-0), the Texans, in the red zone, ran a pass play. Foster, instantly collapsed at the snap (shown above), clutching his ankle. Confirmed reports are stating it’s a blown Achilles’ tendon, which would end his season. It’s important to note that this affects keeper formats too, as Foster, while he’ll be ready for training camps in 2016, will be 30, recovering from an injury that affects “burst”, and might not even be a Texan anymore. So basically the Colts will sign him and he’ll die a slow death. Alfred Blue (3 CAR, 8 YDS) and Chris Polk (4 CAR, 4 YDS and 2 REC, 14 YDS) now gain some relevance, but not enough for me to care.

T.Y. Hilton – 4 REC, 150 YDS, 2 TD. The rarely-seen Colts Offense is making tentative moves out into the open… We’ll try to get closer without spooking them.

Mark Ingram – 14 CAR, 143 YDS, 1 TD and 2 REC, 5 YDS. Look, it was a great performance, but you have to remember, the Colts are going to be 6-10, and aren’t a good football team in the slightest. In fact, those six wins will come from going 6-0 against the AFC South, and then 0-10 against the rest of the league. And, unsurprisingly, they will win the AFC South with a 6-10 record and host the Bengals in the wildcard round. They will then win that game 27-3. And then they will lose to the Patriots by 80 points in the next round. They they will then draft a punt returner with 4.20 40-speed in the 1st round of next years draft. MARK IT DOWN.

Duke Johnson Jr. – 6 CAR, 17 YDS and 7 REC, 73 YDS. I’m wondering, and I’m going to borrow Johnson’s blurb to do it, but would it be so hard for the Browns to change their name to the “Charlie Browns”? That would be so much more appropriate. Then their jerseys could be yellow with that zig-zag stripe.

Jarvis Landry – 5 REC, 83 YDS, 2 TD. Too bad Indy wasn’t playing the Texans yesterday. We would have been approaching black hole-levels of suction.

Doug Martin – 19 CAR, 136 YDS and 3 REC, 35 YDS. If the Muscle Hamster keeps doing this, go ahead and let him have Dougernaut. Hell, he can call himself Dougtronomer if he wants to. Dougcologist? Why not? Get clinical with it man.

Ryan Mathews – 6 CAR, 97 YDS, 1 TD and 3 REC, 24 YDS. I’ll wager that at least 75% of the Eagles’ yards at the end of this year will be from screens and hand-offs to their running backs. It’s seriously the only thing that’s sort of working. Honestly, maybe Fletcher Cox, Bennie Logan, Walter Thurmond, and Ryan Mathews should quit and start their own team.

Darren McFadden – 29 CAR, 152 YDS, 1 TD and 2 REC, 10 YDS. I heard that Jason Garrett had threatened to put Brandon Weedon back in as the starting quarterback if the offensive line didn’t establish the running game early. A bold Princeton strategy if you ask me.

Adrian Peterson – 19 CAR, 98 YDS and 3 REC, 12 YDS. Did we miss laughing at the part where Adrian Peterson was downgraded to questionable due to swallowing chewing tobacco?

Philip Rivers – 38/58, 336 YDS, 3 TD, 2 INT. After watching this game, Los Angeles may upright reject the Chargers from moving up there. Honestly, someone on the Chargers needs to step up and go Pedro Cerano and tell Jobu to “F*ck off”. That’s essentially Rivers. Or I guess in his case, it would be: “Gosh darn it, everybody shut their front door and let’s get a tootin’!” The Chargers may be Webster’s definition of “mediocre” (like how Mike McCoy’s Webster definition is “field goal”), but he’s pretty much a top-3 quarterback this season going forward. There. I said it. Someone tell me I’m wrong. Also, Danny Woodhead (5 CAR, 26 YDS and 11 REC, 75 YDS, 2 TD) has been standard league viable for a long time now folks.

C.J. Spiller – 4 CAR, 16 YDS and 6 REC, 32 YDS. C.J. Spiller, doing what he does best: getting back to the line of scrimmage. I’ll admit, I’ve been enamored with him the last month or so, and while I think he’s an intriguing stash, his schedule of relevancy is just too hard to figure out. I’m moving on. (Career game incoming…) 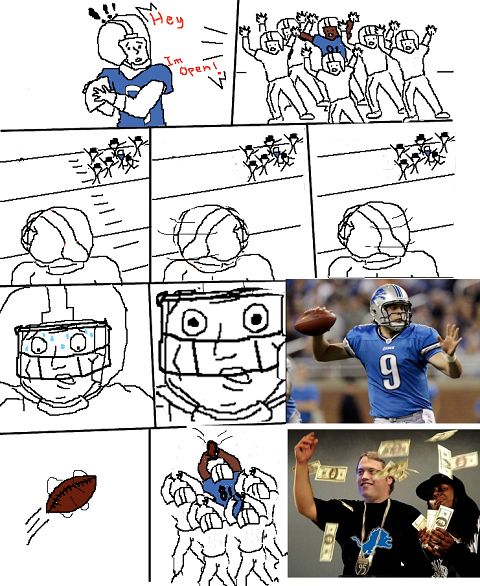 All the NFC East team’s reactions when asked if they’d like to win the division.