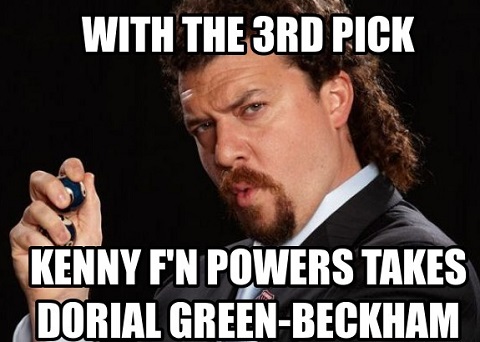 At first glance, he is instantly the second best receiver (behind only Jordan Matthews) on an Eagles team that is desperate for playmakers at the position. However, it might not be that simple. Off the field issues aside, DGB faces a number of obstacles on his way to becoming a significant contributor in Philadelphia.

For starters, he has to learn a new offense. That isn’t a huge deal when you sign with a new team in March or April, but we’re halfway through August. Training camps are winding down, there are only a few preseason games left before the season starts, and Green-Beckham isn’t going to play in the team’s next game on Thursday night. It may not seem like a big deal, but he has a TON of information to digest in a short period of time. Not a small feat; NFL playbooks are complex.

Then there is the offense itself. With Sam Bradford at quarterback and questions along the offensive line (Lane Johnson’s suspension, Jason Peters’s age/injury history, and a camp battle to determine the starting LG), rookie head coach Doug Pederson is likely to play it safe and rely on his running game. If you watched Philadelphia’s first preseason game, you saw Chase Daniel get beaten up by free or mostly-free rushers for two quarters before handing the reigns over to Carson Wentz just in time for Wentz to have his ribs broken by a free rusher. BREAKING: that offensive line is no bueno and has no depth. Also, with a lack of playmaking receivers to rely on, the Eagles are likely to run a decent amount of two and three tight end sets with Zach Ertz, Brent Celek, and Trey Burton.

But Wait, There’s Upside… The upside here is that, like I said, DGB is instantly the second best receiver on the Eagles. That’s why they made the trade. Oh, and their best receiver, Jordan Matthews, is currently hurt and isn’t a lock to be ready for the regular season opener. Other than Matthews, the Eagles have Nelson Agholor, Rueben Randle, Chris Givens, Josh Huff, and a pile of other stiffs on the depth chart.

Agholor is last year’s first round pick and had a disappointing rookie season, which you know all too well if you made the mistake of drafting him last year. While he is still listed as a starter for now, he is going to have to produce if he wants to keep that job, especially with a new coaching staff in town (a situation DGB is familiar with, as he was just shipped out of town by a new coaching staff). Randle has disappointed thus far, and there is speculation that he isn’t even a lock to make the team at this point. Ditto for Josh Huff. Givens is a speedster on his third team in five years.

The point? Dorial Green-Beckham doesn’t exactly have a lot of competition for playing time. If he proves he can pick up the offense quickly and make some plays, he is going to be on the field. The Eagles went out and traded him for a reason (other than only having to give up Dennis Kelly to get him), and they are going to give him his chances. If he works hard and continues to get better, this trade could be a steal for the Eagles (although, to be fair, trading Dennis Kelly for a cold glass of water could have been considered a steal).

But none of that is a given. Chip Kelly’s up tempo offense is gone, and Doug Pederson looks to be running a more conservative offense, similar to what he ran in Kansas City the last few years. DGB is leaving one run-heavy team for a team that seems to be transitioning to a more run-based offense, albeit it one with west coast offense principles. He will get his chances (at least whenever Bradford isn’t immediately checking down to the flats) to earn more playing time and targets, but that is pretty much all we know at this point.

So, When Should You Draft Him?… Honestly, I would stay away from him until late, and I might stay away from him altogether unless you have a league with large rosters and can stash him. At best, maybe take a flyer on him as a WR5 in deeper leagues based on potential and red zone targets alone (remember, he is a dreamy 6’5”). As for ADP, I would rank him closer to WR 90 than WR 30, for sure. In shallower leagues and leagues with smaller rosters, he will likely go undrafted.

At that point in drafts, I would be more likely to take a flyer on a guy like Braxton Miller as a draft and stash guy if I had the roster spots. Or if you are looking for a WR4/WR5 around the WR ADP 55-65 mark, you might be better off grabbing Laquon Treadwell, Tajae Sharpe, Chris Hogan, or Will Fuller.