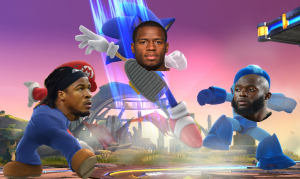 This year the 3rd round is a mixed bag of RB (3), WR (5), and TE (2) according to ESPN ADP. Drafters who took early RBs may look at selecting a pass catcher, but those looking for a runner consistently have 3 options. Fournette, Chubb, and Freeman all have ADPs between 25 and 36 overall but who should you pick? If this is your first RB, it is critical he has a good chance to finish in the top 12 but if you’re looking to win a league this pick should have top 5 upside at the position. Now, the moment you’ve been waiting for: let’s get ready to RUUUUUUMBBBBLLLEEEEE!

Drafters hope third time’s the charm for Fournette and the Jaguars. As a rookie he was 6th in touches with 304 but 41st in yards per touch (ypt) at 4.4. While the volume wasn’t there in 2018, his efficiency was even worse, ranking 61st in ypt.. His career ypt puts him in a group of afterthoughts such as Alex Collins, Carlos Hyde and Peyton Barber. As it stands, Fournette needs huge volume to return impactful results and there are a few reasons to worry about his volume in 2019. First, he has a litany of injuries sprinkled throughout his college and short pro career. Second, the Jaguars coaching change brings a shaky running game history to Duval County. Data on John DeFilippo’s coaching tendencies is sparse since he has coordinated an NFL offense only twice, but the Vikings fired him for not running enough. In Minnesota, his designated “starter” produced a 12-50-0.4 rushing line, adding in 3.3-24-0.1 as a receiver per game. Meh. The good news is that Fournette has a dearth of competition in the Jacksonville backfield and DeFilippo is “trying to find different, unique ways to get him to football”. Even if he continues his plodding, inefficient ways, he should still see the majority of work in Jacksonville. That is, until his body breaks down once again.

2018 was a lost season for Freeman: after sustaining a knee injury in week 1 he returned in week 5 only to succumb to a foot bruise and finally season ending hernia surgery. He is the oldest back of this group, although not past the worrisome age of 28. While his touch total has dwindled each year since his 2015 breakout season, complimentary back Tevin Coleman is now in San Francisco. At his best Freeman is a dynamic, 3 down runner that can excel in all phases of an offense, however his new coordinator gives me pause. Dirk Koetter returns to Atlanta with, quite frankly, a horrific running game resume. Since 2012, only Doug Martin has broken 4 yards per carry in a Koetter offense and only Michael Turner scored 10 touchdowns in a season. Freeman has similar injury and scheme concerns as Fournette but is attached to a better overall offense and boasts a more productive history. I am awarding him second place and have an optimistic outlook for a comeback season.

There is a good chance that Chubb was on many playoff rosters last year. A waiver pickup that flirts with RB1 production will often help his managers into the postseason. Because of that reputation I was prepared to easily hand over the belt to Chubb, however it was somewhat surprising that he was only the RB10 in ppg after taking over for the traded Carlos Hyde. He should be tied to one of the better offenses in the NFL this year, and his team has an ascending defense so game scripts will be favorable. Now 4 years removed from his only major injury (ACL), he has the cleanest bill of health in the group. With a similar team situation from a successful campaign a year ago, Chubb should again dominate backfield touches including goal line work. Of course, to make matters interesting, the specter of Kareem Hunt lingers around week 10. As fantasy teams are preparing for a playoff push, Chubb’s usage may get reduced. Chubb only averaged 2.8 targets/game as a starter, and shares the depth chart with Duke Johnson. If the endorsement for Chubb sounds lukewarm, it’s because I don’t think any of these backs will be league winners at ADP. They all have concerning warts, and are priced around their likely return. That being said, Chubb is the safest of the group and if you are looking for an RB1 candidate in the 3rd round, this is your guy.