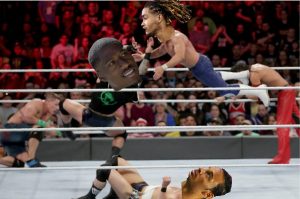 ADP Royal Rumble V will feature a trio of WR3s: Robby Anderson, Dede Westbrook and Will Fuller. With an overall ADP separated by 5 picks, choosing from this group is a situation drafters are finding themselves in often. At this point in the draft you should be shooting for full upside, because even if you miss, you’re no worse just streaming and mining the waiver wire.  Now, without further ado, let’s get ready to RUUUUUUUMMMMMBBBBLLLLEEEE!

Despite the excitement surrounding a second year leap from Sam Darnold, Robby Anderson’s upside is probably limited. He has been a quality receiver since entering the league as a UDFA in 2016, but his skill set is not utilized heavily in Adam Gase’s system. Since leaving Peyton Manning’s nest in 2015, the primary outside WR for Gase has averaged 61-894-5.75 (that includes a prorated season for Alshon Jeffery in 2015). If you go off just his tenure in Miami, that average drops to 50-714-5. For much of Gase’s history, receptions go through the slot position, a place Anderson only lined up 13% of the time in 2018.

Even if Darnold does what he is supposed to do this year, Anderson probably won’t put up a monster season.  History tends to repeat itself, and the Jets offense is likely to run through Le’Veon Bell and Jamison Crowder. Anderson is more useful schematically in real life rather than on your fantasy roster. With the ceiling of a back end WR2, he comes in a distant third among these contestants.

Similar to Anderson, Westbrook finds himself fresh off leading his team in receiving and welcoming a new offensive mind to town. Also like Anderson, Dede should benefit from better quarterback play in 2019 after Jacksonville brought in Nick Foles to replace Blake Bortles. It remains to be seen if Westbrook can truly separate himself from the rest of the Jaguars receiving corps, but the coaching change fits nicely with his established role.

John DeFilippo has a limited track record as a coordinator, but he reunites with fellow super bowl champion Foles and will be charged with breathing life into the Jaguars passing attack. After coaxing 100 receptions and 9 TDs each out of Stefon Diggs and Adam Thielen in 2018, the future would seem bright. Primary a slot WR, Thielen enjoyed his best season under DeFilippo, and Westbrook almost exclusively manned the slot in 2018. Despite reasons for optimism, he secures only a silver in this match since it is still unclear who the Jaguars’ primary target will be.

To this point in his career Fuller has been a shooting star, brilliant for moments but gone too soon. Because he is locked into a secondary receiving role on his own team, the consensus is that he is no better than a WR3 for fantasy. However, his sample with Deshaun Watson belies that assumption. Dating back to 2017, Fuller’s boom/bust ratios in 11 games with his QB1 are 54% boom and 18% bust. That is elite territory considering both DeAndre Hopkins’ and Davante Adams’ boom rates were about 50% in 2018. And before you ask, Hopkins was active and doing Hopkins things for 10 of those 11 games.

I have been bearish on Fuller to this point, but with an ADP in the low WR3 range there is almost no downside. He has a reputation of an “all or nothing” receiver but that miniscule 18% career bust rate would say otherwise. Prior to the 2018 season his ADP was closer to WR28 but injuries again hampered him and now the price has dropped further. As a fantasy WR3, a few week winning finishes easily pays for the investment. Fuller has the best history of this group, the best quarterback by a mile, and the most upside. I would be excited to land him anywhere close to his ADP.