This is nothing like Foggy Mountain Breakdown, but I like that diddy. These two games have kept me up at night (not really).   I have gone back and forth on my predictions and I’m hoping that writing my game break downs will help me come to a decision.

Last time they met the Jets got off to a fast start when Brad Smith returned the kickoff 97 yards for a touchdown.  The stats for that game are mostly to the Steelers advantage, well, except for the final score.  Let’s look at the overall stats for their last matchup. 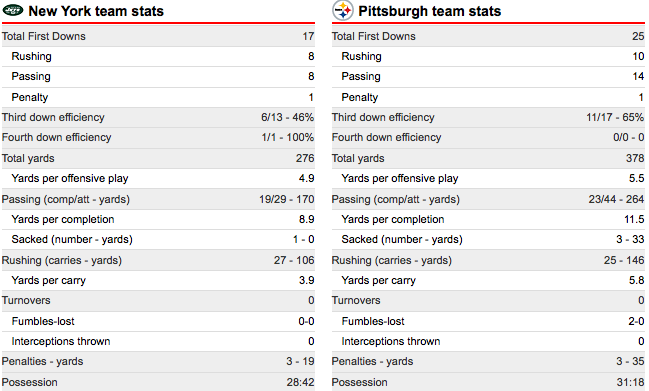 The only stat that stands out for the Jets are the 3 times they sacked Roethlisberger, one for a safety.  Other than that the Steelers executed well.  Let’s look at each offensive position —

Quarterbacks: There isn’t much comparison at least statistically between Mark Sanchez and Ben Roethlisberger, but Sanchez has been getting it done in the win column in the playoffs.  Sanchez has beaten Peyton Manning and Tom Brady already, well, his team helped quite a bit.  The problem for Sanchez this weekend are the disguised blitzes Dick Lebeau will throw at him.  Plus the Steelers have arguably the best linebackers in the league.  Add Ryan Clark, Troy Polamalu and Ike Taylor in the mix and Sanchez could have trouble.  The Jets have scaled down the offense to give Sanchez less on his plate, which makes it easier for him to act instinctually and quickly, but he’ll have a lot to read with the Steelers D.

Tom Brady was confused by Rex Ryan’s defense all night.  They showed him one thing and then did another and got to him with coverage sacks.  The Steelers offensive line is hurting and it will be interesting to see if the Jets blitz more to get to Big Ben than they did Brady.  They have the ability to cover the Steelers receivers, but Roethlisberger’s escapability makes coverage sacks a little more difficult and if he slips away, Mike Wallace will be tough to cover forever. I like Roethlisberger’s chances of having a decent fantasy game and Sanchez not as much.

Running Backs: The trio of LT, Greene, and Sanchez got to 109 yards rushing and a TD the last time they met, which is one of the better days against the Steelers, but they averaged 3.9 yards a carry and Sanchez is the guy who scored the TD and he’s not a running back. You just don’t run on the Steelers, but they will need to go through the motions to keep the Steelers from teeing off on Sanchez.  LT and Greene cancel each other out in fantasy, especially against the Steelers.  LT could have value in a PPR league, but otherwise I would be worried about starting either.

Rashard Mendenhall had a nice game the last time they met with 99 yards a TD and 5.8 yards a carry.  The Jets rush defense is 3rd in the league, but still are giving up 90 yards a game compared to the Steelers 62.  There won’t be much room in the run game for either side, but since Mendy is the main guy I would feel much better throwing him out there in fantasy.  Your chances of getting a goal line TD from here are better than choosing between LT and Greene.

Wide Receivers: Last time they met Braylon Edwards accumulated 100 yards on 8 receptions while Santonio Holmes was held in check by Ike Taylor.  Jerricho Cotchery was out of that matchup and just came off a nice game against the Pats.  His presence does help Sanchez because he is one of those chain movers that Sanchez needs in a crunch.  Braylon will have a hard time cracking 100 again.  I think the Cotch Rocket has the best chance for the most targets, but it’s hard to just toss Holmes to the side.  He is too good in the end zone not to start.

The Steelers receivers are getting a little harder to figure with the emergence of Emmanuel Sanders and Antonio Brown.  But it is evident that Mike Wallace is the #1 receiver no matter what.  He had a nice game the last time they met, but didn’t find the end zone.  Hines Ward was covered by Revis for much of the game and was shut down, but he is Roethlisberger’s security blanket and could grab a TD, but I wouldn’t want to bank on it.  Wallace is a must start even if the Jets focus on stopping him with extra help while Revis takes out Ward.  The wild cards are Sanders and Brown.  I’d feel safer with Sanders since he gets more red zone looks.

Tight Ends: After Santonio Holmes took over as the #1 receiver Dustin Keller became persona non grata. It’s impossible to recommend him even though in the playoffs they could throw a new wrinkle in there for him, but you just can’t count on it.

Heath Miller was injured the last time they met and Matt Spaeth ended up grabbing a touchdown.  Miller has had TDs in his last two games and should see a red zone target.  He’s worth a play.

Here is the box score from their last meeting — 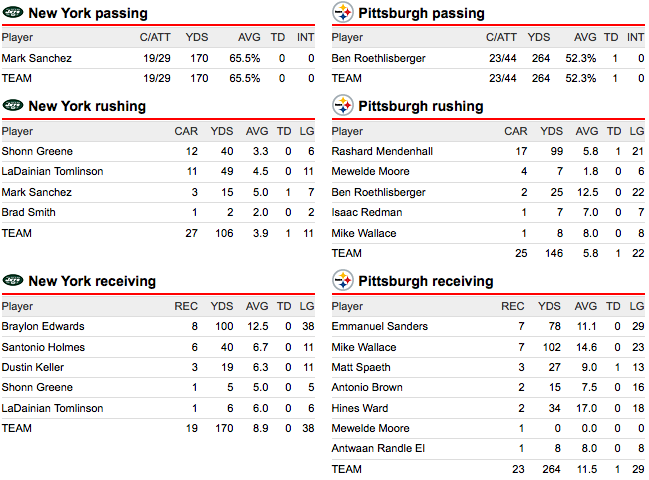 Special Teams: Brad Smith has been hurt, but is expected to play on Sunday.  If he is 100% he elevates their special teams quite a bit as the Steelers will remember from last time. Nick Folk is really just God awful and add Ketchup Field to that awfulness and you have a whole heaping helping of awful, with ketchup on top.

The Steelers are about average in overall special teams. Antonio Brown and Emmanuel Sanders have been returning kicks and have been doing well with both gaining over 23 yards a return.  Shaun Suisham has actually been decent so far this season, but his history and the stadium don’t bode well for him in the clutch.  Football Outsiders ranks the Jets 6th and the Steelers 16th in special teams.  The Jets have the nod here.