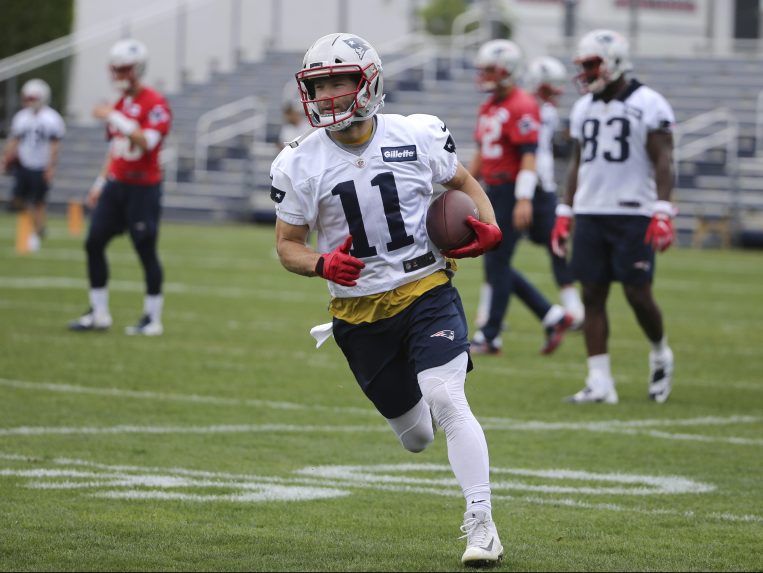 In a shocking turn of events Thursday afternoon, the NFL world learned of Julian Edelman’s very likely suspension of 4 games for violating the NFL’s policy on performance-enhancing drugs.

The Patriots aren’t too foreign to the concept of their star players being suspended for 4 games, so let’s dive into what this suspension means for the Patriots, but more importantly, fantasy owners come draft time.

What This Means for the Patriots

And even though Edelman did miss last season, the Pats offense didn’t miss a beat, as they still finished with the 2nd most receiving yards, and the 3rd-most receiving TD’s, thanks in part to some standout play from Brandin Cooks, Rob Gronkowski, and Danny Amendola.

Now with Amendola and Cooks gone, and Edelman out of the picture, the Patriots look like they might have one of their more weaker receiving corps in recent years, as they’ll likely have to rely on Gronk, Braxton Berrios, Jordan Matthews, Chris Hogan, and Philip Dorsett.

I’m not a gambling man just yet, but if I could put money on it, I think the Patriots completely scrap some of their offensive ideologies from years past, and start to emphasize the run in ways that can be seen with the 2017 New Orleans Saints. Because for the Patriots, it seems like this should be the best option.

Like I’ve already said, even with Gronk, this isn’t a receiving corps that jumps off the page at me, or opposing defensive coordinators. However, their running back depth is pretty solid. Not only do they have Rex Burkhead and James White returning from last year, but they also added Jeremy Hill in the offseason, and Sony Michel in the draft. They might use Michel as a workhorse back, or a three-headed monster of Burkhead, Hill and Michel alternating on primary downs, with White as the main passing-downs back. Either way, with the addition of G Isaiah Wynn in the draft, and the rest of the pieces on this O-Line coming back healthy for the 2017 season, the Pats going run-heavy makes sense. Not to mention the fact that their defense looks really darn good with the pieces of Adrian Clayborn, Danny Shelton, Malcolm Brown, the McCourty Brothers, Dont’a Hightower, and Trey Flowers. And, it’s always a good idea to help elongate the career of a 40-year-old QB with a run-heavy offense.

If there was any time for the Patriots to emphasize the run, rely on their defense for their aging QB, this would be the year. But, if they can still work the magic that they’ve been working for the past 18 years or so with another middle-of-the-road receiving corps, I see them replacing Edelman with Berrios in the slot, and picking things up right where they left off last year.

Which brings us to the second part of the article.

What This Means for Fantasy

So let’s go scenario-by-scenario to figure out what specific hypothetical scenario would mean for our draft this fall.

If The Patriots Go Run-Heavy

So if we start to get indications and reports that the Patriots will go run-heavy for the 2018 season, or at least for the first 4 games until Edelman returns, I think the only viable receiver you should be targeting in drafts is Rob Gronkowski. I’ll probably be writing a full article on Gronk’s fantasy stock for the upcoming season, but if Gronk’s ADP in August is anywhere near it is currently, around the 3rd round, that is incredible value. And even though his ADP is likely to climb, Gronk could easily still smash value as the only receiving option that Brady has legitimate chemistry with.

If The Patriots Remain Pass-Heavy

Okay, so if the Patriots continue with the same offensive ideologies that they’ve gone with for forever now, then someone has to account for the 151 targets left from the departures of Brandin Cooks and Danny Amendola. Those targets can’t all go to Gronk, so someone has to pick up some of that workload. And that’s where Braxton Berrios comes in. Unless Jordan Matthews bursts onto the scene, or Philip Dorsett/Malcolm Mitchell continue building chemistry with Brady, I think the best possible option to pick up the slack is the 6th-round slot receiver from Miami. It already helps that he could step into the slot where Amendola primarily operated, but if things go his way during training camp and preseason, he could burst onto the scene in 2018. And if that could occur, he definitely could be one of the better sleeper options in 2018.

So… Where Does That Leave Jules?

Honestly, I don’t know yet. We won’t get any accurate ADP data that reflects a 4-game suspension until a few days/weeks from now, and when that happens, I’ll give you my thoughts (most likely in my June ADP review), but until then, I’m not sure when I’ll want to take Edelman just yet, but I wouldn’t hate it if he was my WR4 or 5. 4 games isn’t the end of the world, but I don’t think I want him as my 3rd receiver just yet.

Alright guys, that is all my time for today. Please don’t hesitate to leave a comment or question below, and I’ll see you guys next time for another podcast or article!