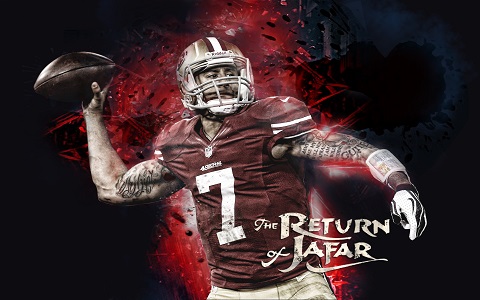 In 2012, safety Donte Whitner said Colin Kaepernick’s nickname was Jafar from Aladdin. Works for me. But Jafar was the villain. And Kaepernick is a hero. He led the 49ers to the Super Bowl in his first year as the starter. Ron Jaworski said, “I truly believe Colin Kaepernick could be one of the greatest quarterbacks ever.” Then things started to change. Defenses figured out the read-option. As his weaknesses were exposed, the criticism mounted. Trent Dilfer in 2013 said, “While Kaepernick remains an incredible player and an incredible athlete, his development as a passer has ‘plateaued’ this season, and he hasn’t made enough progress in his second season as a starter.” The hero was slowly turning into the villain.

2014 was when everything hit the proverbial fan. The team finished 8-8 and much of the blame was placed on Kaepernick. He had five games with fewer than 200 yards passing, eight games under 60% completion percentage, three games with more interceptions than touchdowns, only four games with two or more touchdowns, and only one rushing touchdown.

Not much was expected from Kaepernick and the 49ers heading into 2015, but they were able to open the season with a win. The unprepared and inept Minnesota Vikings offense allowed the defense to be dominant. As a result, Kaepernick was not asked to do much: 17/26, 165 yards, with 7 rushes for 41 yards. In Week 2, he had a great fantasy day (33/46, 335 yards, 2 touchdowns, with 9 rushes for 51 yards), but most of that came in garbage time as the Steelers hammered the 49ers 43-18.

It is the Week 3 and 4 games that we should be worried about. Against the Cardinals, Kaepernick went 9/19, 67 yards, 4 interceptions, with 7 rushes for 46 yards and 1 rushing touchdown. Yuck. Cardinals’ safety Tyrann Mathieu said, “We knew going into this game that the focus for them was to run the football. Their passing game has just simplified so much, it was easy for us to anticipate routes, get some good breaks on the ball today.”

Against the Packers, he went 13/25, 160 yards, 1 interception, with 10 rushes for 57 yards. Defensive coordinator Dom Capers employed a similar strategy to the Cardinals. Good thing, because Kaepernick had torched his defenses in the past. He kept Kaepernick in the pocket as much as possible and forced him to beat them through the air. The return of Jafar…

Based on this throw…

Colin Kaepernick with an impressive throw on the run. Anquan Boldin with an equally impressive catch. #49ers pic.twitter.com/DURTOYPqCG

He may be taking owners to a new world for sure.

Let’s delve a little deeper into what’s been going on each week.

Here is the remaining schedule for the 49ers (rank for passing yards per game allowed in parentheses):

Don’t get gassed by the last two games from Kaepernick. Has he made improvements? Sure, but the fundamental issues still persist: accuracy and deciphering defenses. He’s a phenomenal athlete that has produced for fantasy in the past, despite his shortcomings. With that said, he is still going to be an inconsistent performer going forward.