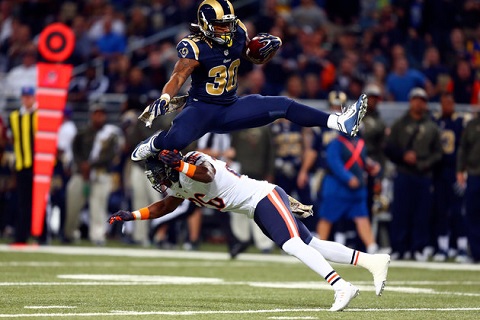 What’s up Razzballers (or Razzballas if you’re not one for the “Hard R”) and welcome to this week’s edition of Beyond the Numbers! Looks like all of our rosters are getting put the test early on this year, so I hope you’re using your bench wisely. Injuries, combined with some poor play from “elite” players, are proving why depth is so important in fantasy football.  You’ve got no excuse to still be sporting duds on your team; coaches have shown what kind of offenses they want to run this year, and quarterbacks have heavily targeted the guy they want to be involved. I’ll give you guys some good names to target below, but first, let’s start with the guy everyone seems to have questions about.

Todd Gurley – Todd Gurley ain’t happy, and neither are any of the people who drafted him. Let me start by ripping off the band-aid… This guy won’t be returning near his ADP value this year. Yup, don’t worry I can hear you all from here, “Wow what an overreaction, you moron; he was playing two solid defenses. Didn’t you see what a monster he was last year?” Sure, you’ve made a fair point, but I’ll tell you why this isn’t an overreaction. Rams are by all accounts undermanned and terribly coached. Think for a minute, how many other players from the entire Rams roster were even drafted in your league? I’m going to go ahead and guess none. Sure, this man showed he knew how to carry the rock in his rookie season, but it seems teams have had the obvious thought, “How about we stack the box, and just let Case Keenum and Kenny Britt beat us?” Defensive coordinators have to laugh when scheming against them. The absurd number of 40+ yard gains last year is going to be a thing of the past with safeties playing much closer to the line of scrimmage. I went through the play by play of every single game he rushed for more than 100 yards last year and found a common theme. In every such game, he had a rush of at least 48 yards, and I really don’t see how that will continue in 2016. Of course Gurley will have some impressive games due to his immense talent and proven workload, but I can’t see the consistency you want from a first rounder. I don’t think I’m being hasty when I say, if anyone is willing to part with a WR1 or RB1 that you like, you should really consider making a trade.

Devonta Freeman – I wanted to include Devonta Freeman in this article as well, but it seems like it’s pretty obvious he’s in a timeshare as long as Tevin Coleman is healthy. C.J. Anderson syndrome strikes again, and it looks like he won’t be recovering any time soon. He’s still an RB2 going forward, but just as with Gurley, don’t expect him to return his ADP value.

Jordan Howard – Don’t worry, I know a lot of you don’t know who this guy is, and that’s why he’s here. I’m trying to give you insight, people!! Before you open a new tab and pick this guy up off the waiver wire, let me tell you a little bit about him. He’s 6’ 1”, likes pancakes for breakfast, and really enjoys the movie Hoosiers. Ok just kidding, even though that does describe most people, minus the height. He’s now the de facto number two running back on the Bears following Ka’Deem Carey’s injury, and looks to be an audition away from the number one role. Jeremy Langford has almost 200 carries now and looks as lost running the ball as Trent Richardson does… sorry, used to. Although he doesn’t have much NFL experience, Howard showed in the preseason that he could handle a decent volume of work and even catch passes. You know how I said in the opening that you should be using your bench spots wisely? Reports are saying he has a chance to carry the ball around 10 times this week, and it’s not going to take an amazing performance to unseat the underwhelming Langford in my opinion. To me, Howard is the last running back on waivers that has the potential to be a solid RB2 without an injury happening first. You know that stash wide receiver you grabbed at the end of the draft that isn’t panning out (Devin Funchess, Kamar Aiken, Rishard Matthews, etc.)? Well, it’s time to drop his ass for a player with a real shot at fantasy success. I’m clearly not starting him this week, but Howard is easily worthy of a roster spot.

Jacob Tamme – Since we’re on the subject of waiver wire adds, go ahead and pick this guy up too if he’s still available. He’s currently fourth in targets among tight ends and leads all Falcons in targets (16) AND receptions (11). Alright, I know how this is supposed to be Beyond the Numbers, but this is my article, and I can do what I damn well please. Matt Ryan doesn’t seem to have developed chemistry with Mohamed Sanu yet, and he’s started looking toward Tamme whenever Julio is covered up. Clearly Tamme isn’t in the same stratosphere of talent as Tony Gonzalez, but as Ryan has shown in the past, he has absolutely no lack of experience throwing to TEs. This being Tamme’s second year on the Falcons squad, he seems to have found his spot in the offense quite nicely. I think he’s an obvious choice as a TE1 this week against the Saints, but another good showing should solidify him as TE1 against all teams.

Randall Cobb – This guy reminds me of that ex you’re always breaking up with and getting back together with, giving a different excuse each time. Last year, he was supposed to be posting impressive stats after Jordy Nelson was out with an ACL tear, but then he fell flat. Cobb says he was never truly 100 percent in 2015 due to a lingering shoulder injury, and alright, I’ll give him the benefit of the doubt. This year though, Jordy’s back and he should be posting reliable fantasy numbers again, right? I mean even if he couldn’t hack it as a WR1, it doesn’t matter now; Jordy has to garner some defense attention, right? Ah man, somebody talk me out of getting back together with her again. The offense is just so pretty, and the upside is just too tangible. It’s going to be much better this time. Ya, things have to get better since the Packers don’t play a solid defense again until week 11. Plus, did you see how many times he lined up in the RB spot? It’s nice having a WR that also gets carries. Well, it looks like I’ll be giving this relationship one more go as Cobb sports high upside as a WR2 to me, still, somehow.

Thanks for joining again this week. As always, hit me up with your comments, and I’ll get back to you before game time!