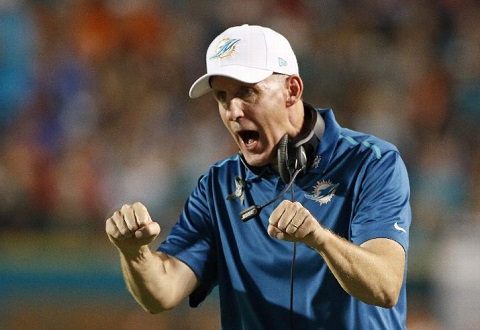 This looks like a stroke. Someone should call a doctor at some point, yes?

Well, Thursday Night Football was once thought of as an offensive onslaught of the mind, soul, and body early in the season. At least, that’s how it accosted me with all those 50-point blow-outs and Phill Simms repeating “Well JEEEEM” ad nauseum. Then there was a two-week reprieve where normal football things occurred. This, obviously, was against nature itself. We now have some kind of ridiculous regression going on, and in the specific case of last night’s game, the Bills and Dolphins entire first half consisted of “let’s drive as close to the goal line without scoring a touchdown”. Spoiler Alert: The Dolphins came out on top in that intriguing game of chicken with twice as many field goals as the Bills… with two field goals. But hey, if you managed to fight off a brain aneurysm to watch the second half, you were rewarded with two Miami touchdowns, Kyle Orton doing very Kyle Orton things, and the refs doing their own homage to the Thursday Night Football derp.

Lamar Miller – 15 CAR, 86 YDS and 2 REC, 12 YDS. I was afraid to start him, based on last Sunday’s production and the way he looked, but even with limited mobility, he was able to get 86 yards on the ground. In most cases, your flex option should have a higher ceiling this week, so don’t feel terrible for playing it cautious, but I think it’s safe to put him back in your lineups next week.

Mike Wallace – 4 REC, 38 YDS. Mike Wallace, basically one of the most consistent starters from either team out there last night. Consistently awful that is.

Anthony Dixon – 10 CAR, 35 YDS and 2 REC, 13 YDS. I love that his nickname is “Boobie” Dixon. Right now, he’s probably my third favorite Boobie. After Right and Left. And to be totally honest, I wish he actually went by Boobie, so he could be listed as Dixon, Bobbie.

Chris Hogan – 7 REC, 74 YDS. I’m pretty sure Orton meant to throw all of these to Sammy Watkins (3 REC, 32 YDS and 1 CAR, 3 YDS), but with two sacks and pressure all night long, I’m willing to bet he thought Hogan was Watkins.