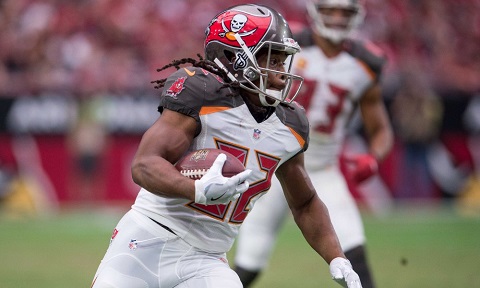 Hey there, amigos. Welcome back to another fun-filled edition of By The Numbers. I’ll be your personal guide through this maze of numbers and fantasy goodness, so put on your reading glasses (pants) and join me in the quest for a title. Maybe some of you are like me – off to a not so spectacular start in your league. In the Writer’s RCL, I’m mired in a two game losing streak and stuck in 10th place. That’s not ideal, considering there’s only twelve teams. Sure, my team is 2-4, but it’s a good-looking 2-4, I can assure you. No worries, I’ll be okay. I kinda feel like Chuck Pagano each week, just making excuses for why my team sucks and pointing the finger at everyone but myself. Everything is fine, I tell myself…..EVERYTHING IS FINE. You have to have a certain level of resilience to be able to compete amidst adverse fantasy conditions. If you’re still reading this, well, welcome to the club. The first order of business is to get off the couch, put on our fanny packs and crocs and look into the mirror. Yes, we look ridiculous, but that’s besides the point. Stare right into that sucker and say “I will NOT lose my Week 7 match up.” There. Feel better? The truth is, well there is no magic pill we can take to ensure success each week. But we can take a look at the number and take advantage of the best matchup breakdowns we can find. This week I’m looking at a few gems that I think will help push me into the winner’s circle. One of my favorite plays this week is Jacquizz Rodgers and his tilt against the San Francisco 49ers rush defense. The 49ers defensive front was obliterated last week by Buffalo’s backfield, giving up a 44/312/4 line – just two week’s after yielding a 37/172/2 line to the Cardinals. They’re having a bad year, to say the least. I mean, like in a bus with Billy Bush bad. It’s ugly my friends. The 49ers are dead last in the league in rushing yards allowed (174.3) and they’ve given up 9 rushing scores so far this season. Over the past three week’s opposing RBs have averaged 34.7 points fantasy points per game, which happens to also rank last in the league. There’s a theme here if you’re paying attention. Basically, you want to be invested in the Tampa Bay rushing offense this week. If you act quick enough, he’s still available in 61% of ESPN leagues. As of Wednesday, Doug Martin was still not practicing, so there’s a good chance Rodgers will see a healthy workload Sunday.

Here’s a look at a few more of my favorite passing and rushing match ups this week:

Andy Dalton – There’s really nothing more therapeutic for your passing game than a date with the Cleveland secondary. The Browns have given up 16 passing scores this year while generating just nine sacks. They’re also allowing an average of 285.3 passing yards per game and giving up 22.3 points per contest to opposing tight ends.

Joe Flacco – I believe this makes three straight week’s that Flacco’s graced us with his presence on this list. The Jets’ passing defense ranks 28th in the league, allowing 290 yards per game and they’re yielding 25.6 fantasy points per game to opposing QBs. That’s good for fifth-worst in the league.

Matt Ryan – San Diego owns the league’s 24th ranked pass defense, allowing an average of 279.9 yards per game. Just two weeks ago Derek Carr dropped a 25/40 for 300 yards and 2 TD line on the Chargers so we’re betting on Ryan to at least match that type of production. This game carries the highest O/U of the week at 53 points, so you’ll want a few shares of the Falcons offense in all formats.

Kirk Cousins – Normally I wouldn’t even consider Cousins’, especially on the road. This situation however, calls for a change in my 2016 QB philosophy. The Lions’ pass defense was obliterated by Case Keenum last week, surrendering 311 passing yards and three touchdowns. Detroit has allowed 17 touchdowns through the air, most in the NFL and they’ve generated just three interceptions. Over the last three games, Detroit has given up an average of 25.6 fantasy points to opposing QBs (4th most) so this shapes up as a great match up for Cousins. If you’re looking for one more reason to play Cousins’ or any part of the Washington passing game, here it is: Vegas has given this match up an O/U of 50 points. That’s the second largest O/U of the week.

Colin Kaepernick – I hate myself for doing this. I actually like old CK this week, as the 49ers will find running the ball rather tough against the Tampa Bay front seven. Naturally this will give Kaepernick more opportunities to scramble for chunk yardage and throw the ball against a below-average Buccaneers’ secondary.

Spencer Ware & Jamaal Charles – The Saints’ rushing defense is, well……not good. They’ve allowed the most rushing touchdowns this year (11) and they’re ranked 26th in the league in rushing yards allowed with a generous 117.3 per contest.

Devontae Booker – Usually I try to stay away from “Narrative Street.” In this case, this sets up as almost too good to be true. The Broncos will be looking to embarrass former QB Brock Osweiler after he left them at the altar for greener grass (field turf) in Houston. The Texans’ have allowed 6 TDs to running backs this year and last week they escorted Frank Gore into the century club – giving the Colts their first 100-yard rusher since 2012. The Broncos are favored at home and this will be a near even split of work for Booker and C.J. Anderson.

DeMarco Murray – The Colts’ rushing defense…..Welp! They’ve handed out six touchdowns to running backs this year and over the last three games they’ve allowed opposing RBs an average of 23.4 fantasy points per game. That’s good for seventh-worst in all of football.

Terrance West – The Jets are a total train wreck. They were gashed for 111 yards and 3 TDs by David Johnson Monday night so this looks to be a fantastic opportunity for West to turn his volume into fantasy gold. They’re ranked 28th in fantasy points allowed to opposing RBs – giving up an average of 24.3 per game. If you’re a Jets’ fan looking to DVR this game, I’d just skip through the action on the field and watch the commercials.