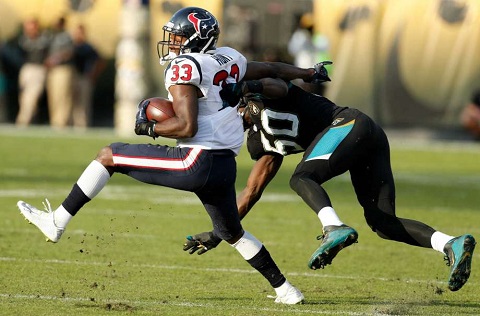 Hello everybody and welcome to this week’s Deep Impact! When I first set out on writing this series at the beginning of the season, I had three nagging fears in the back of my head. One, that I would run out of Deep Impact play on words to begin the article (which happened weeks ago), and the second that as the season progressed, it would be more and more difficult to find playable names under 10% owned. Once the season is more than half over, you would expect that the hidden gems have revealed themselves, and that the underperforming players you drafted would be cast aside to make room for them. I have been pleasantly surprised to find that thanks to injuries and late bloomers, along with the general malaise that seems to impact a good chunk of leagues (looking at you, leagues responsible for Jamaal Charles being 27% owned). We don’t always stick to the threshold, but I think we’ve been able to keep the spirit of it alive. What was my third fear? Bees. I guess that doesn’t have anything to do with writing the article but I hate bees. Anyways, check out the rest of the article for some names below (or close to) the 10% owned mark for some Week 11 options…

Akeem Hunt (RB, Houston Texans, 0% owned) – All hail Prince Akeem, who has come from Zamunda to save your fantasy season (maybe). Hunt took the carries that would normally go to the banged-up Alfred Blue and did well with them to the tune of 52 yards on eight touches. As a result, Bill O’Brien has said he’ll be in the game plan against a Raiders defense that lets up the second most yards per carry in the league. With Blue still not practicing, and disappointing starter Lamar Miller limited in practice himself due to an ankle injury that briefly took him out of action last week, there’s some upside for Hunt to get double digit touches, and of course much more if Miller finds himself unable to go. If you own Miller, Hunt is a must-own right now to hedge for Monday night’s game, but any gamer who needs an emergency option for this week should be making the add.

Tajae Sharpe (WR, Tennessee Titans, 11% owned) – It wasn’t that long ago that most people other than Mike Mularkey and Chip Kelly’s wet dreams had written off Marcus Mariota, and therefore the Titans’ passing attack, while DeMarco Murray carried the load. Well, Murray hasn’t slowed down (like Chip Kelly’s 2015 wet dreams), but Mariota has been playing great now as well, and the rest of the Titans receivers are worth a look as a result. Sharpe was a popular sleeper in the preseason who most people have moved on from by now, but he’s strung together back-to-back useful games and is worth a look against a middle of the road Colts offense.

Ladarius Green (TE, Pittsburgh Steelers, 12% owned) – Some Chargers fans who may or may not write for this site *cough* Jay *cough* were very big on Green coming into the season prior to the bizarre concussion/ankle injury story that unfolded during training camp and lingered into the season. Well, he finally was able to take the field last week in a game that only the most desperate of you readers would have started him in, and he caught three balls for 30 yards. This is nothing to write home about, but was an encouraging development as he rounds into shape, especially since he was only on the field for 16% of the snaps. He practiced fully on Thursday, and against a weak Browns defense, he has a chance to feast assuming that the team increases his number of reps.

Adrian Peterson (RB, Minnesota Vikings, 31% owned) – I know, this is far above the threshold we normally look at. I just wanted to make people aware if they aren’t already that Peterson resumed some light running today, and apparently his body does not conform to the same rules as 99.999% of human beings. There’s a chance he comes back in December, just in time for some fantasy playoff games, and there’s also a chance that disgruntled owners without IR spots cut him loose when he wrecked his knee to begin with. I don’t see any names this week below the 10% owned mark to stash that haven’t already been covered in previous weeks. Who did I cover before, you may be asking? Go back and read the old articles to find out! Just please skip the “Drop” sections of those articles, they don’t look so great in hindsight. Alright fine, I’ll repeat myself here so you don’t see that terrible advice: Cordarrelle Patterson (6%) and Taylor Gabriel (3%) are still out there and worth a spot on the back end of your roster.

Kenny Britt (WR, Los Angeles Rams, 63% owned) – This is a new section I’m adding for just this week, since this is the trade deadline week in many leagues. With Jared Goff being named the new starter in LA, I would be looking to move any shares of Britt I have if someone is willing to pay based on his current level of production. I don’t know what the Rams passing game will look like going forward, but if Goff wasn’t playing well enough in practice to supplant Case Keenum sooner than this week, I don’t have high hopes for the production of any receivers on this team for the rest of the year. I wouldn’t drop Britt outright (more on that in a little bit), but I would definitely be looking to cash out if the return is right.

Nope. Not doing it. I can handle making a bold stance and having it blow up in my face, but to try to boost my confidence with a layup call last week (Drop Ryan Mathews! He’s useless! Now look how smart I am!), only to have him respond with THE BEST FANTASY GAME OF HIS CAREER has broken me. I need to take a week off from this section for my own sanity, please check back next week. In the meantime, if you have any questions in the comments (where my success rate is better, I swear), hop in there and we’ll chat.