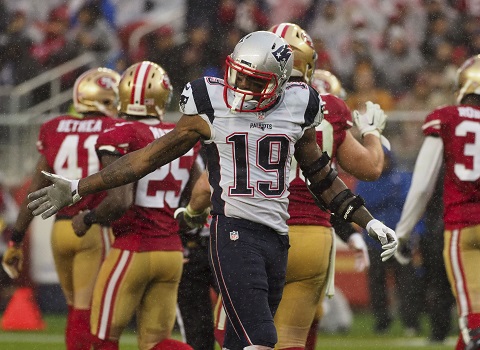 Hello everyone and welcome to this week’s Deep Impact! This is going to be a short one as I recover from my two Thanksgiving feasts (just one of the many benefits of growing up as a child of divorce). As my arteries course with gravy, allow me to share some players that I’m thankful are available in less than 10% of Yahoo leagues.

Malcolm Mitchell (WR, New England Patriots, 2% owned) – Mitchell is the latest in the long line of no-name skill position players to have a breakout performance catching passes from Tom Brady. That last week’s big game came from a rookie receiver is surprising, though, since historically Bill Belichick has treated rookies like I treat my toilet the weekend after Thanksgiving. With Rob Gronkowski and Chris Hogan out last week, though, Mitchell stepped up to the tune of four grabs for 98 yards and a touchdown. If Gronk and Hogan are both out again this week against the Jets, which as of now looks to be the case, Mitchell well get another chance to shine. If those two are on the field, though, it’s probably back to the shadows.

Marqise Lee (WR, Jacksonville Jaguars, 9% owned) – Take a look at the pass attempt leaderboard, and in second place you’ll find Blake Bortles chucking the ball 41.5 times per game. It isn’t a great sign for the franchise if they’re asking Bortles to play catch-up almost every week, since the only other stat Bortles could lead the league in is interceptions, but it is great for fantasy players in need of receiver help. Lee has emerged over the past few weeks as a beneficiary of Bortles’ overuse, to the tune of 6 or more targets per game, getting more looks than Allen Hurns and doing more with his chances. The matchup isn’t great this week against the Bills, but when the Jags inevitably go down three scores by the end of the first half, you can bet on Lee coming up big in garbage time.

Rex Burkhead (RB, Cincinnati Bengals, 3% owned) – This last one is a stretch, but with Gio Bernard out for the year with a torn ACL, I’m curious to see how Jeremy Hill gets used. The coaching staff has expressed confidence in Burkhead’s ability to take on the Bernard role in the offense, but I doubt that they’ll give him the same usage. Still, I wonder if Hill hasn’t been used as an every-down back because of Bernard’s presence, or if it’s because they just don’t trust him to be a reliable pass-catching option. I’d view Burkhead as more of a stash for most, but if you’re really desperate in deep formats, I’d gamble on Burkhead getting 8-10 touches and hope for the best.

Paul Turner (WR, Philadelphia Eagles, 0% owned) – This guy is as legendary in Philly right now as a DiNic’s roast pork sandwich. The undrafted free agent looked electric at times in the preseason, and WIP callers have been throwing fits about his exclusion from the roster since he didn’t make the cut coming into the regular season. The local mouthbreathers have been clamoring even louder for him to get brought up from the practice squad after the collective foibles of the current receiving corps, and finally got their wish this week. With Nelson Agholor playing his way out of the league and nobody else on the roster stepping up, there’s a window of opportunity for Turner to contribute right away. He’s worth stashing in the deepest of leagues, but everybody else should keep an eye out.

Ty Montgomery (WR/RB, Green Bay Packers, 46% owned) – It was a fun fling we had with Ty, he gave me some great games with position flexibility not normally found in fantasy football, and some great Simpsons-themed team name ideas as well (I settled on See Montgomery Burn). But, like all things related to the Packers this year, the fun times have come to an end. Mike McCarthy is content to go with James Starks as his primary running threat, with Montgomery getting occasional change-of-pace looks. Unless you’ve got an especially long bench, I don’t see any reason to hang onto him. A good coach might try to recapture the spark Montgomery brought to the offense earlier in the season, but McCarthy is busy coaching his way out of a job. Make like Aaron Rodgers taking out his family Christmas card list and start cutting.