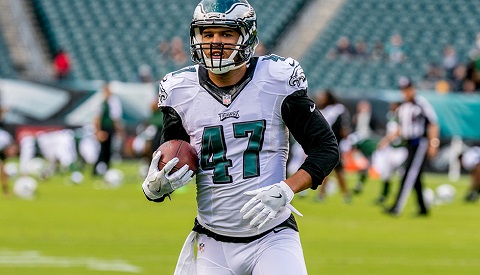 Welcome back everybody to this week’s edition of “Derp Imprints”, our recurring series at Razzball where we take a look at our favorite merchandise with Eli Manning’s dopey face printed on it. First, let’s gaze into Eli’s post-interception eyes on a nice t-shirt… *answers call from Jay* I’ve been informed that this will instead by another installment of Deep Impact, and also that I shouldn’t make fun of Eli since he can’t help the fact that he looks like that. For those of you who haven’t been following along, well why haven’t you been following along? Are you too good to read some fantasy advice?? How’d you wind up on this site to begin with then? Well while you’re here, might as well check out these recommendations for deep league starts and stashes that are less than 10% owned in Yahoo. Or, click the banner link to find out more about Marie Callender’s pot pies, if that’s something you would rather do with your free time. But before we jump into names, allow me to share a brief story that I promise is relevant to this week’s article.

Back in 2010, my brother lived in an apartment complex in downtown Charlotte near the Panthers’ stadium and practice facilities. Since it was so close, and the building was fairly nice, several Panthers players lived there at least during the season. Well, leading up to Week 9, my brother found himself sharing an elevator ride with Jonathan Stewart, who was set up to be the lead back that week with DeAngelo Williams banged up. Since he has no sense of appropriate behavior in most situations (it runs in the family), he says, “J-Stew, need you this week for fantasy, got a big game coming up.” Stewart, annoyed by hearing something along these lines for the 5,000th time, responds with, “I need myself this week… for my career.” What happened? Stewart left in the first quarter with a concussion, continuing his streak of disappointing fantasy players that carries on to this day. And with that, let’s jump into a very fitting first name…

Cameron Artis-Payne (RB, Carolina Panthers, 13% owned) – Am I breaking my own rules here? Yes, for three reasons: 1) I’m tired of writing about Chris Thompson every week (still only 7% owned and still should be on any deep PPR roster); 2) I wrote up CAP in the preseason and can’t pass up an opportunity to talk about being right on something; and 3) It’s my article and I’ll write about who I want, dammit. I thought my preseason call of CAP as the Stewart handcuff of choice looked bad when he was a healthy scratch for the first two weeks of the season, and thought it looked even worse when Fozzy Whittaker went for 100 yards stepping in for the inevitably injured Stewart. But, here come the reports that CAP will be used as the early-down back, with Fozzy relegated back to change-of-pace status. I don’t exactly understand the decision; after all, why use him as a change-of-pace one week after his pace proved to be a pretty effective one just a week ago? However, if it makes my preseason prediction correct, I’m all for it. The matchup against the Vikings is less than ideal, but aside from the aforementioned (and repeatedly mentioned in this space) Thompson, CAP is the only low-ownership back I’d roll the dice on this week. You aren’t getting 10-15 touches anywhere else in this ownership territory. So make like the lonely, lonely soul you are and take those touches where you can get them.

Kenny Britt (WR, Los Angeles Rams, 5% owned) – I’m breaking another rule of mine in this article: don’t start players who are catching passes from Case Keenum. Rules were meant to be broken, and of all the low-ownership receivers that I’m watching, Britt has the most favorable matchup and the second-most targets through the first two weeks (16, one behind Jeremy Kerley, who has a rough draw against the Seahawks this week). The Bucs’ pass defense has been shredded by the Falcons and Cardinals so far this season, and if Britt can get solid numbers against the Seahawks like he did in Week 2, I think he can put up a playable stat line this weekend if the early-season injury bug has hit you hard. Hold your nose while doing it, if you must, but start him if you’re hurting for options.

Hunter Henry (TE, San Diego Chargers, 1% owned) – Speaking of injury bugs, let’s take a look at the Chargers! Their stud receiver and best receiving RB are already done for the year *pauses while you get a fresh box of tissues*, and now Antonio Gates looks very questionable this week with a hamstring injury. Enter Hunter Henry, the 35th overall pick in the draft, All-American tight end at Arkansas, and owner of the most southern-sounding name since Wheeler Walker, Jr. This is a big roll of the dice, but Henry is a talented kid with a prime matchup against the Colts, and there just aren’t that many other options left for Philip Rivers to throw to. You’re not afraid to take a little risk, right? You, the man who sometimes only looks one way before crossing the street, and sometimes drinks TWO glasses of warm milk before bed instead of one, afraid of taking chances?! Keep living life on the edge and put Henry in the lineup.

Ronnie Hillman (RB, Minnesota Vikings, 7% owned) – In standard formats, I’d avoid the rubble of the Adrian Peterson-less Vikings backfield if at all possible. There’s many possible outcomes, none of which would surprise me. Jerick McKinnon takes the reins and becomes an every-down back? Sure. Matt Asiata gets 20 carries a game, despite only averaging 2.7 ypc? Why not. Some time-share that renders all parties borderline useless? That’s probably what will happen. But in deeper leagues, you’ve got to get as many lottery tickets as you can, and with McKinnon and Asiata long gone, here’s the last ticket standing. The Vikings signed Hillman, the Broncos’ leading rusher last season, during the week to provide some depth. He’s worth a spot on the back of your roster since one of those possible outcomes I discussed before is Hillman emerging as the lead back when the dynamic duo of McKinnon/Asiata don’t get the job done.

Trey Burton (TE, Philadelphia Eagles, 1% owned) – Hey guys, remember that time when I briefly mentioned Burton while plugging Brent Celek as a start last week? *ducks to avoid thrown shoes* I may have been off the mark there. I didn’t expect Burton to get so heavily involved so soon with a veteran presence ahead of him, but I forgot that Celek is about five years past his expiration date. Burton is clearly the preferred pass catching tight end, and the team uses enough two tight end sets that being second on the depth chart won’t limit his opportunities as long as Zach Ertz is on the shelf. If you’ve got Ertz, or any of the other tight ends dropping like passes thrown to Kenny Stills, clear some space for Burton.