Greetings! I hope you’re all enjoying that missed call from the Seahawks Monday Night Football game as much as I am. I’ve been witnessing a great deal of Seahawks hate across the nation on Twitter and it pains me. It pains me a great deal. What’s not to like about the Seahawks? Their defense from top to bottom is honest to the Gods one of the greatest assemblages of talent in the history of the NFL. They have a cool (kind of) young quarterback in Russell Wilson who makes multiple jaw-dropping plays every single week… and Beastmode… EFFING BEASTMODE! If I wasn’t from Seattle, I would still be enamored with this squad, but maybe I just like cooler sh*t than you do, or maybe I’m just more of a man/woman (?) than you. Either way, I will drink the tears of sadness from the hundreds of thousands of downtrodden Bengals fans once we go in there and beat the brakes off em next Sunday. It has been written. [Jay’s Note: Uh, two teams are tied for dead last in the NFL in offensive touchdowns with just five. One is the 49ers. Want to guess who the other team is?] 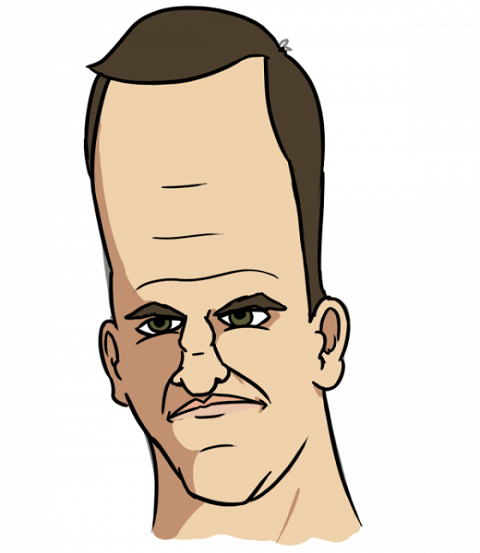 Peyton Manning – Peyton, oh wise and powerful son of the Elders, we thank you for returning to us in our time of need. Even with the arm strength of a 12-year-old girl, it has been written in scriptures in rare leather bound books that you shall rise yet again and give us your best performance of 2015 in a match-up with the Oakland Raiders who rank a pathetic 31st against the pass. Feel free to throw the those bubble screens to D.T. and Sanders ALL DAY! Oakland has actually been solid against the run so, yeah, this is happening.

Tyrod Taylor – Those taking shots at the God after Week 4, let me ask you: Did you actually watch the game? For I am confused. Did you happen to miss the MESMERIZING 33-yard touchdown run, that literally NO other QB in the NFL could make that was called back by a HIGHLY questionable call? Oh, and did you miss one of the most stunning and orgasm-inducing bombs I’ve ever witnessed fall perfectly into the outstretched finger tips of one Charles Clay? Add ONE of those plays and you have a top-8 or higher finish. Add BOTH of those plays and you have a top-3 finish. I don’t even need to look at the numbers to know that, but if you really want to question that, please feel free to do the math while I cry tears of sadness. The dude is truly legit and the sooner America unites in accepting this, the better off we’ll all be. IF you know football, it’s simply impossible to argue with me on this. If you’re a hating ass-crab, well, then may the Elder Gods help you eventually see the light.

Justin Forsett – Two things I’d never see in 2015; Donald Trump leading many polls for becoming the President of the United States of America and Justin Forsett in my Delight section. After the first three weeks of the season, I was ready to write off Forsett for the entire season, but after last week’s breakout (through WIDE open holes, I must add), and throwing in that he gets to face off against the 31st ranked rushing defense in the NFL, one could make the argument that Forsett is a top-5 back this week. Heck, he may even actually score a touchdown! Wouldn’t that be something!

Carlos Hyde – I’m expecting a close game as the Giants defense isn’t talented enough to put the clamps on any NFL team. If I’m the head coach of the 49ers (I fully believe I’m more capable than Tomsula), I make it a point to get Hyde 20-plus carries this week. Yes, the Giants have been quite solid against the run thus far, but San Fran simply needs to force the issue. Their defense is solid enough to keep this game close and IF they WANT to WIN this game, they will need to run the ball and run the ball some more. This is a winnable game.

Mike Evans – Jacksonville is 26th in the NFL against the pass and Mike Evans is frothing at the mouth like Nicolas Cage after hearing that Clint Eastwood was considering him for his next project (so that he could stop doing direct to On Demand movies and pretending he was doing it for the art). Evans is a monster and is due for an explosion. I’d say it’s highly probable he ends up a top-10 wideout this week, which is where he belongs every week, talent wise.

Allen Robinson/Allen Hurns – Tampa Bay is miraculously fifth in passing yards given up, but much of that was due to game flow and a limp-armed Drew Brees. Strictly on a talent basis, their defensive backfield is an atrocity of mass proportions. Robinson is easily a WR2 EVERY week at this point and Hurns has surpassed any and all expectations I had for him coming into the NFL. Bruh is hella legit. Expect them to feast like a grizzly bear that was just woken up from hibernation by drunk teenagers… Well, that’s a pretty awful thought, isn’t it?

Charles Clay – May I continue to beat into your brain that if Sammy Watkins and LeSean McCoy continue to miss games the Bills will continue to find ways to get Clay the ball? I thank you. If you INTELLIGENTLY started Clay in DFS last weekend for a ridiculously low price, you enjoyed the fruits of his labor, although not the full fruits as I’m forced to again mention the penalty that cost Clay a 50-yard TD reception. UGH!

Cincinnati Bengals Defense – This is extremely difficult for me to admit, but I’d rather look at Khloe Kardashian’s butthole for six hours straight after a midnight taco bell run then talk about the Seahawks inept offensive line. IF the Seahawks are going to pull this one out, it will be an extremely low scoring game, so either way, the Bengals are a solid option. They certainly have a more talented front four than the Detroit Lions and you just witnessed what they did to this pathetic group of so called men. This could get ugly. You’ve got to be realistic about these things.

Nick Foles – The Packers defense is 8th in the NFL in pass defense, and quite frankly, is MUCH better than I ever thought possible. So much better that I’m now actually considering them a threat to the Seahawks when it comes time for the playoffs. Foles isn’t talented enough nor does he have the weapons to be able to challenge this unit. You probably weren’t going to start him anyway, but hey, Cust Kayin.

Jay Cutler – Picture a pissed off and ornery 1-3 Chiefs defense, at home in front of one of the loudest home crowds in the country, and then picture Jay Cutler’s emotionless ass across from, doing all he can not to make eye contact with Justin Houston. I’m expecting multiple turnovers to the crib in this game in a big Chiefs win. Say one thing for Jay Cutler, he’s talented… but also say he has less heart than the Tin Woodman. There’s no place like home, there’s no place like home. There’s no place like home. Sorry Jay, you can’t click your cleats together three times and end up back at your mansion with my teen crush, Kristin Cavallari. 1) There’s a solid chance she’s getting boned down by your pool man. And 2) You gotta take this whooping first.

Joseph Randle – New England is giving up 4.9 YPA, but the fact remains that Randle just isn’t that great of a running back. Add in the fact that New England will more than likely be curb-stomping Dallas, forcing them to throw, Randle is barely cracking my top-20 in Week 5.

Melvin Gordon – I have no words for this peasant… I’m sure he’s a great guy off the field though. [Jay’s Note: Gordon is tied for the league lead in 20+ yard rushes.]

Antonio Brown – As we all witnessed last week, Brown simply won’t be the same without Big Ben. I wouldn’t be writing intelligently (a rarity, I know) if kept Brown as a top-3 wideout, especially when going against a couple solid corners in San Diego this week. I believe that Vick can still get it done, but he’s just too much of a wild card to expect him to force feed Antonio for 100-plus yards and a tub every week.

Marvin Jones – How’d that work out for you last week? Now he gets the Seahawks, who’s defense looked about as good as anyones I’ve ever witnessed on Monday night.

Maxx Williams – This is just a big F.U. to Maxxy for last week’s performance. I’m sure he’ll go off now that everyone has given up on him. Such is life.

St. Louis Rams Defense – The Rams are a top-5 fantasy option each and every single week… except when they go into Lambeau field where the Packers look unbeatable. St. Louis also just lost one of their more talented defenders in Alec Ogletree, so I would’ go there unless you can’t afford to drop someone else for another defense.

Thank you for joining me for another edition of Disgrace/Delight. Though I’m exhausted and feel like death, I truly believe I gained a lot from this , spiritually. My hope is that you did too. As per usual your comments and questions will be responded to in the section below. I look forward to conversing with you fine people, as always. Enjoy your week.