A lot of fantasy football rankings and projecting boils down to how one distributes rush attempts and targets to a team’s RB/WR/TE. There are macro-variables (e.g., how many plays will the team run? what is the rush/pass split?), rate variables (what is the player’s catch rate?, what is their yards per target?) and kinda but not completely fluky TD projecting. But, for the most part, each season’s non-injury based breakouts and disappointments can be tied to a larger rush and/or target percentage than estimated by the consensus.

There is a big difference between projecting players and writing articles on players. When I project players, my goal is to be as unbiased and evidence-based as possible. I will make qualitative adjustments to the analysis of past games which typically drives my models based on news like player role changes, injuries, team offensive strategy changes, etc. But, at the end of the day, I do not particularly care about making a ‘case’ for a given player. The projections are the projections.

When you are writing about a player, you are typically taking a stance. No point in writing articles like, “I think the ADP has effectively estimated the value of this player!”, right? This stance on the player likely starts from some compelling piece of evidence to the analyst. But once the decision is made and they write an article, it is only natural to become like a prosecutor who only looks for information that supports their case. This opens up possibilities where ‘facts’ are brought up that support the narrative but actually have no statistical merit. If enough writers use the same logic to support points, it eventually becomes adopted as ‘industry wisdom’.

I bring all this up because it feels like I have read a lot of content this preseason making cases for players because there has been RB/WR/TE turnover on their team and there are missing targets to distribute. I am going to venture that 100% of articles touting Chris Godwin and O.J. Howard note that Adam Humphries and DeSean Jackson had 179 targets in 2018 and are no longer on the team. Here are the Google results for “179 targets humphries jackson“. This extends into other hypotheticals like “If Antonio Brown does not play because of frozen feet or helmet loyalty, Tyrell Williams becomes more valuable!”.

I think this one boils down into two opposing views:

So in the cases above, I do think Godwin and Howard have target increases vs 2018 because they are projected to play more snaps. Additionally, Godwin is projected to get some slot work which helps his target rate (but hurts his YPA). Tyrell Williams, however, has been a deep threat his whole career and I see any targets that would have gone to Antonio Brown largely redistributed to intermediate-threat WRs with some uptick for RB/TE.

To test my assumption, I looked at all RB/WR/TEs in 2017 and 2018 who 1) did not change teams from previous year and 2) had 100+ Snaps in both years. I then plotted their target per snap difference in Year 1 vs Year 2 against the percentage of their team’s targets that returned from the previous year. 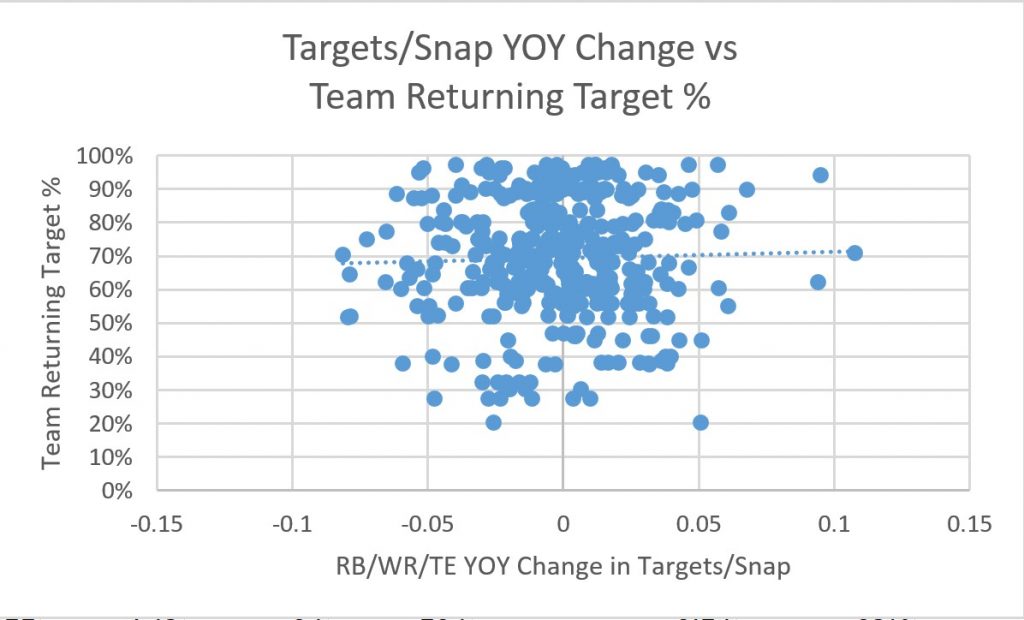 As you can probably tell by the dotted trendline, there is no relationship (correlation (r) is .03 ) between a team’s returning share of previous year targets and returning players’ targets per snap.

So next time you see a factoid like “but someone has to replace the 179 targets that went to Adam Humphries and DeSean Jackson last year”, just disregard it and focus on the rest of the analyst’s case.