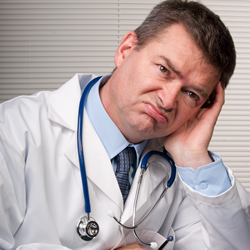 When P&E came into my clinic today I rushed them into my office and closed the door. “Let’s get right down to business” I said, opening up their chart. “The bye week was not kind to you” I mourned as their faces dropped.

“But how?! No one played a game for us!” I had to gently explain that even though their fantasy team was on bye, the real NFL players still had to suit up. Devin Singletary once again showed his incredible efficiency scoring 11.7 fantasy points on just 6 touches. Unfortunately this performance was wasted on the bye week and what’s worse is that he pulled up lame with a hamstring.

After inquiring if I could fix him I laughed and said I’m not a real doctor, just a fantasy one. All I can do is look forward and we’ll try to make the best decision for the coming weeks. The good news is P&E have the WR1 and WR2 on the season as well as the ever exciting Odell Beckham Jr and Travis Kelce. RB continues to be an issue. 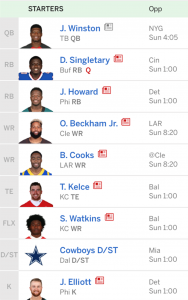 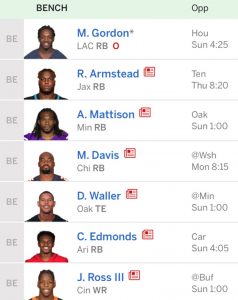 Taking a look at our drop/adds after week 1:

John Ross III – Ross looked explosive as ever and saw plenty of targets again. He turned 8 looks into 5-112-1, although the TD was in garbage time. But that’s fine! The Bengals D is looking horrific and that means garbage stats will be ever present. The current WR2 overall is probably still a WR3/FLEX even when AJ Green returns. Zac Taylor is mirroring the Rams setup and I envision 3 fantasy relevant WRs with everyone healthy.

Cowboys D – This was all about week 3 and they get the Dolphins on tap. Lock and load.

Peyton Barber – Dropping Barber was an L for me and P&E. He miraculously led the Bucs on Thursday night with 23-82-1 and 1 catch for 7 yards. I still don’t like him, but 24 touches is hard to ignore no matter how inefficient they are. Given Singletary’s injury we may have to swallow our pride and add him back.

Sitting in the 11th position, P&E will hope to grab a helpful RB with Singletary limping, and last week showed that the waiver may be easy pickings in this league:

Davis feels like a drop now after logging only 3 touches for 1 yard in week 2. I cannot explain the week 1 timeshare but it appears Matt Nagy has chosen a lead back.

A good fantasy manager takes their medicine, and this transaction is exactly that. A week after dropping the uninteresting Barber, we’re begging for his empty carries. I think starting him over Jordan Howard or in place of Devin Singletary is a good move for week 3. This is what rock bottom looks like.

With Damien Williams leaving Sunday’s game early and Lesean McCoy headed for an MRI on Monday, Thompson is the most exciting back on the market. It may amount to nothing but I’d rather hold him through the week over Armstead. UPDATE – Got sniped on Barber, landed Darwin.

Burkhead has been getting some work, and apparently James White’s wife is expecting their child. He almost missed the trip to Miami and he may be on #babywatch for the next few weeks. There is precedent here with teammate Kyle Van Noy missing week 1 for a new baby. Should White watch the game from the hospital, Rex Burkhead is a nice RB2 plug-and-play. We’ll add a kicker for someone Sunday morning. UPDATE – success!

Last week I suggested adding Cam Newton, which the patient refused. Turns out this was a good decision as Cam is now in a walking boot. Winston gets a fun matchup against the Giants but Allen has been impressive for 6 straight games dating back to 2018 and now gets the welcoming Bengals D.

Allen can gain points in all phases of the offense and may be the team’s best running back with Singletary out. I think he could be “the new Cam” and a season long answer at QB. UPDATE – Allen was taken ahead of P&E, looks like Jameis gets one more chance. He’s in a great matchup at least.

Last week’s Watkins-for-Mixon offer was rejected, so no dice there. When I approach a trade, I like to identify players on my roster that should be attractive to other teams. I don’t try and dump obviously underperforming or bad players to opponents because that is just going to create poor rapport with your mates. Dangling an over-performer can also rub people the wrong way, but at least that a guy playing well at the time. One thing I like to do is sell a big name if I believe in a bench replacement, rather than try to sell the emerging bench player.

Looking at P&E’s roster some tradeable assets are:

Some RBs worth targeting in a Cooks deal:

An interesting return for John Ross:

No major changes to the starting lineup. We’ll wait on reports out of Buffalo (Singletary), Kansas City (Thompson) and New England (Burkhead) to see if there is some way we can patch together 2 starting RBs. Better yet, hopefully someone will bite on a trade offer.

Also, can’t forget to add a kicker on Sunday morning!

Hey, this team is still undefeated but heading into week 3 bruised and battered. The thrill of #ZeroRB is risky living and the unknown. We just need to be flirting with .500 through week 6/7 and an RB will surface. They always do. Trust the good doctor.