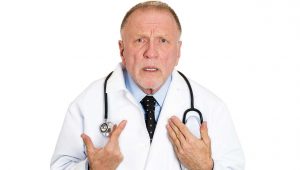 A new patient called me up this week begging to be seen in clinic. It was the same ol’ song and dance “oh, my team isn’t that bad I just have been unlucky…” Sure, pal. Well, what do ya want me to do about it? He persisted, and after a brief discussion of signs and symptoms I agreed to take on a new challenge.

Signing Off… For Now

Don’t worry folks, I am still following up with our friends P&E but due to league inactivity our impact may be limited. After running into a buzzsaw week 3, they stand at 1-1. BUT OH BOY MELVIN GORDON THE THIRD SET TO REPORT THIS WEEK!!! I completely bought in to the fact he would wait the maximum 8-or-so games, but evidently he has realized his lack of leverage. Rex Burkhead looks like a great pickup with Sony falling flat and we’re hopeful he can be a RB2 for them. Devin Singletary also lurks on the bench.

If we needed more evidence the league is dead, P&E snagged Wayne Gallman with 7th priority last night. With that addition, along with the MGIII news, they are probably one of the better teams in the league. And judging by the lack of competition, our patient is well on the way to a healthy season.

I honestly can’t take a lot of credit, although we did stash Waller pre-season and landed useful piece John Ross after week 1. But this team clunked to 1-1 on the drafted players, which goes to show you never give up in fantasy football. Things change so fast, scrape a few wins together and all of a sudden you can be the favorite.

The man we will refer to as “KJ” is a 30-something who is a known fantasy addict. I will disclose I have a personal friendship with this manager, and we do play against each other in a few leagues. However there is no conflict of interest here, as I have no involvement in the league of the team I was asked to fix. The first thing that needs to be done is an overall assessment of team standing, roster, strengths and weaknesses. 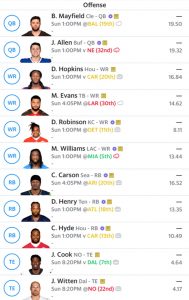 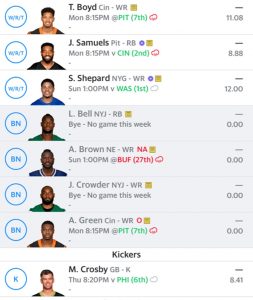 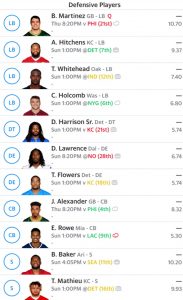 Well, You’ve got a Hole in the Wrong Spot

QB – Not a huge problem but Baker has under-performed to date. I am concerned with him, Freddie Kitchens and the entire offense. Better days should be ahead, but I am not sure we can wait on that. Josh Allen is an excellent QB2.

RB – Looks ugly this week with Le’Veon Bell on bye, but a trio of LVB, Carson, and Henry really shouldn’t be bad. Bell is getting tremendous volume that will keep him afloat even in a bad offense. Carson did get the dreaded “vote of confidence” this week but really not a bad RB2. Finally I have never been a Henry guy but as an RB3 his floor should remain reasonable as he can always salvage a bad day with a TD.

I despise Hyde’s archetype but he has been producing. He’s an uninteresting RB4. Samuels is dust and he probably shouldn’t be rostered, much less starting. I think we can find some better bodies on the wire.

One issue with this RB group is that I don’t see tons of upside. They’re all kind of floor plays at their respective tiers. RB is the second worst unit on this team, and we can look to make some adjustments here. I would think adding some risky upside plays could provide a spark.

WR – Wide receivers are the strength of this team, which is a good place to be. Hopkins and Evans are studs, and despite slow starts I have no worries. Boyd is seeing fantastic volume in the new look Bengals offense, he’s a prime WR3. Robinson is getting good looks in perhaps the best offense in NFL history which is an ideal WR4, although the clock may be ticking on him with Tyreek Hill on the mend.

I love Mike Williams as a WR5, another slow starter who is bound to see some TDs in the near future. Although, I would earmark him as a sell after a 2 TD performance. Sterling Shepard’s time is coming to a close with Golden Tate on the way back. Crowder is very boring but a suitable replacement for when Sterling exits stage left. Then we have the AJ Green stash, a strategy I usually don’t recommend. It is nice depth piece and perhaps we can parlay that into a trade for an upgrade at RB. The short bench is another reason that holding AJ Green is a problem, but he can’t be straight dropped either. Antonio Brown, however, will be dropped.

TE – This is the black eye on of this roster. I understood the process with Jared Cook but was wary of the situation. He went from the primary target in Oakland to at best the third option in New Orleans. Combine that with the fact, the Saints have been trending toward a more balanced attack over the past few years Cook was a major stay away for me. Unfortunately for KJ, all those fears are realized as Cook has seen 3, 7, and 2 targets in the first 3 games.

Jason Witten? I… guess? Hes locked into a 3-25- “maybe 1” line. Will certainly be searching the wire for TE help.

Individual Defensive Positions (IDP) – In the interest of time, I won’t address this “second roster”  during our first visit.

A quick glance at the free agents reveals some interesting names.

Jameis Winston, QB – Winston had a rocky start to this year, but showed up in a get right spot against the Giants. I think there is an argument for pulling the trigger on Jameis over Baker because of upcoming schedule. Winston faces the Rams next in what should be an explosive game. The Rams D has limited opposing QBs so far but they played zombie Cam Newton and shellshocked Teddy Bridgewater in the first 2 weeks. After that the Bucs go to New Orleans. Baker’s near term schedule is a divisional game at Baltimore and then San Francisco who has terrorized opponents with an aggressive front 7. We saw what the Rams did to the Cleveland line on Monday and I am pretty pessimistic that Baker is going to find his groove in the short term. UPDATE – KJ elected to go for Daniel Jones against the Redskins. I can hardly argue the matchup, and I agree Baker at Balty is best left on waivers for now.

Wayne Gallman, RB – An obvious add, I am no Gallman apologist but would start him over Carlos Hyde this week. I think he’s going to be in the RB2 bucket. Expect 15-18 touches and an occasional TD. Peyton Barber or Frank Gore type production. We’re unlikely to land him at 5 though. UPDATE – As expected, priority #1 landed Gallman.

Ronald Jones II, RB – I have him lower than others because I just don’t believe we’re going to be able to know when to start Jones. A true 50/50 committee behind a bad offensive line, the Bucs can barely support 1 RB, much less 2. Additionally Jones does not offer a different skill set than Baber, just a more explosive but risky running style. I think it’s possible Bruce Arians notices that Jones has outplayed Barber to this point, but I think I would rather take chances on some of the following higher upside pivots. UPDATE – Nah.

Darrel Williams, RB – DW 2.0 is my favorite waiver pivot this week. While everyone chases Gallman I am happy to land a potential lead back for the Chiefs. Yeah, I said LEAD BACK. Shady McCoy re-aggravated his ankle last week and for all we know Damien is still nursing his sore knee. Darrel was great against the Ravens and could find himself KC’s RB1 by default. Even if he plays second fiddle again I’d rather start hi over Hyde or Samuels. UPDATE – Added, dropping Jaylen Samuels.

Greg Olsen, TE – This is an absolute smash add, and possibly one that can be had with the 5th waiver spot. Olsen > Witten all day, and I don’t think you need me to say why. UPDATE – I was texting KJ late Tuesday, but I think he was asleep. Didn’t get the bid in and Olsen was added.

Dawson Knox, TE – An intriguing rookie, Knox scored his first TD this week. Buffalo can use a big red zone target and Knox offers physicality that John Brown and Cole Beasley can’t. As crazy as it sounds I may start him over Witten immediately. UPDATE – Added, dropped Witten.

Surround Yourself With Good People

Some possible trades to consider:

This may be a tough sell as Kamara went nuts this past weekend. But the addition of Williams may be enticing. The AK41 owner may be fretting the QB situation in New Orleans as well. I think Kamara is a massive upgrade for the long haul as a game script independent stud. His upside is also higher in general because of the work in the pass game. KJ is bloated at WR and I’m confident that a Williams replacement can be found on waivers. UPDATE – rejected

Boyd has been OK so far, just like Kerryon has been just OK. Both these players have seen good underlying volume but are slow to turn the engine over for fantasy. I like catching Johnson before his matchup vs KC, and in game 1 post-CJ Anderson he saw the volume we’ve all be hoping for. There could be a slight buy-low chance here before a uptick in value. This isn’t a Boyd fade as much as it is trading from a position of excess for a position of need. UPDATE – rejected

Ok, I admit this is an insane offer. But Conner has been THAT bad. DRob is a solid WR2 now and is going to remain relevant even when Tyreek Hill comes back, that Chiefs offense is something we’ve never seen before. I doubt this would be accepted but looking at the Conner team, this could be a match. Maybe open up negotiations here and end up sending Boyd.

Some underlying metrics like juke rate and yards created are not promising, but I think Conner is worth an upside acquisition. Mason Rudolph will take his lumps but should improve and the offensive line is still a good unit. I have some optimism, but I honestly wouldn’t give more than Boyd. UPDATE – KJ hates Conner, and I cant blame him given the results. We’ll turn elsewhere for backfield help.

One rule of thumb is don’t give away the best player in a trade. In this case, KJ would be sending the 2 best players and bulking up his depth, but that won’t win championships. He rejected, and I agree.

The Lions just haven’t committed to Kerryon the way we hoped after the release of Theo Riddick and then CJ Anderson. He is 22nd in weighted opportunities mainly because he’s not seeing enough receiving work. Additionally, he has not shown the same juice he did in 2018 because he’s faced the 7th most men in the box so far in 2019. On the IDP side, Jiare is no throw in as he is rated the 7th best CB, and is tied for the most passes defended in 2019.

With a strong WR corps I don’t think this team is hopeless, but things will need to start clicking. A running back stable can be hard to establish and yet things can pivot in one week’s time due to injuries. There are some high upside handcuffs on the wire due to the short benches like Alexander Mattison, Tony Pollard, and Chase Edmonds.

As I handed KJ my report, he snatched it away in anticipation. The thought of trading his “best player” Derrick Henry triggered some strong emotions but I explained my rationale and he may be comfortable sending out some offers. Check back next week to see what happened with P&E and now KJ!