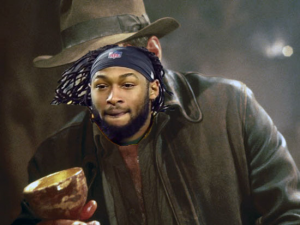 Weighted opportunity is a metric that recalibrates the value of touches based on the expected fantasy points for carries (less valuable) and receptions (more valuable). Thanks to player profiler, I was able to see if there was a strong correlation between running back weighted opportunities per game (WO) and fantasy points per game (FP) in 2018. Sure enough, there was a strong correlation with an r2 value of 0.8864. 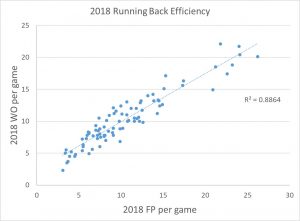 With this information, the next goal was to identify backs who scored FP above and beyond what they should have scored given their WO. Backs with an FP/WO >1 can be considered efficient fantasy scorers. Unfortunately, I did not have data prior to 2018 so at this time it is unclear whether FP/WO is sticky year to year. However, picking a good FP scorer who also stands to see increased volume locks in both floor and upside. If the efficiency regresses, at least there’s somewhat of a break-even with increased volume. If you hit on an above average scorer with increased opportunities, that is a league-winning combination.

If you’ve been reading my articles this summer you know I recently gave an ADP Royal Rumble belt to Williams here. It was nice to see my old friend pop up again using this metric. With an FP/WO head and shoulders above Todd Gurley (1.30), Alvin Kamara (1.23) and Christian McCaffrey (1.18), Damien was outstanding with his opportunities in 2018. Despite conflicting summer reports, his WO should increase in 2019 as he will begin the season as the lead back according to Kansas City reporter Nate Taylor.

Williams will almost certainly see a dip in his FP/WO, but the KC offense just plain elevates running backs. Kareem Hunt had the second best FP/WO of 2018 (1.40) and Spencer Ware was no slouch (1.17) in his short stint as the starter. Unless news breaks that the Chiefs will use a significant timeshare in their backfield, I would have no problem drafting Damien Williams at any point after RB12.

Well color me surprised! There are members of the community that have been pounding the table for Henry all offseason, but I have not been one. Yet, here he is in all his methodical, grinding glory. He had the 6th best FP/WO despite seeing the most defenders in the box of any RB last season. Although we know this story has a major caveat: Henry didn’t have a game with 70 total yards until week 14, which was also the first time he finished as an RB1. His miraculous stretch to end the season was one of the most shocking events of 2018.

You’ll read later how his backfield mate was far less productive in the same offensive environment, which should encourage more utilization of #22. A word of warning, however: he had the second fewest receptions of the backs evaluated, right behind James Develin (who made the list based on snaps played but had 4 TDs on only 6 carries). A working hypothesis is that this metric uncovered a couple of players who scored a lot of FP via TDs while having a low WO value due to few receptions (which are weighted more). This combination produced an above average FP/WO ratio, but may be a situation primed for regression. If you liked Henry, knock yourself out and be encouraged. I remain unconvinced that he is a very profitable draft pick this fall.

Aaron Jones has had an unusually quiet summer which is probably a good thing. He is not suspended, and more importantly there has been no buzz from his competition. Jamaal Williams was inefficient by FP/WO in 2018 (0.81) and has been injured for over a month while the team has been installing a new offense. Rookie Dexter Williams has struggled, getting yelled off the practice field at one point.

Jones is an exciting player with a history of production via both receiving and rushing dating back to college. There is no question he is a high end producer when on the field, ranking 9th in yards per touch (5.9) in 2018. Drafters remain wary because suspension and injury have come into play his first two seasons, but Jones appears to have all the ingredients for a breakout season. New Packers head coach Matt LaFleur oversaw a unit that was third highest in situation-neutral run rate in 2018, compared to the Packers’ third lowest ranking in the category. In 2019, Jones will begin at the top of the depth chart, have a clean slate with a new coaching staff, and few hindrances to unlocking his supernova potential.

This should be quick. The opportunity set before Chubb has been covered ad nauseum. Yes, the release of Duke Johnson locked Chubb into a 3 down, bellcow role. The best part of all is that Chubb is locked into an ascending offense and he’s #good at football, producing throughout college and as a rookie. He was also not as one dimensional as some will say, after earning the starting job he was on pace for 30-40 receptions. No one will confuse him for James White, but 40 receptions would place him in the top 20 at his position.

I’m excited. You’re excited. We have no clue what the landscape will look like in week 10, so let’s just cross the Kareem Hunt bridge when we get there.

There are many smart people touting JoHo as a savvy arbitrage pick who will get quality carries in an improved offense this year. However, the Eagles paid virtually nothing to secure his services, sending a 2020 6th round pick to Chicago (with potential to become a 5th). This was also before they drafted ultra athletic Miles Sanders in the 2nd round. In 2018, Howard had the 6th most carries but finished 30th in fantasy points per game. This inefficiency is reflected in his FP/WO as well. No, he did not suffer from an unlucky TD season either as he actually scored +0.1 TDs than expected.

He will have a role in Philly, but a short yardage/goal line only back is not helpful for our purposes. He was hanging on to fantasy relevance via top 5 volume in Chicago but that is due for a downswing. Of course, his ADP reflects this change, but in my opinion Howard is an unexciting fantasy handcuff if other members of the backfield fall away and the Eagles are forced to use him more than they planned.

What a difference a year makes. 12 months ago, Rolls Royce crept up into the 3rd round of redraft leagues! After being usurped by shocking UDFA Phillip Lindsay, he now finds himself on the wrong side of a timeshare. There was some excitement earlier this summer that he could have the most carries in the Denver backfield, but we know carries are not really the best way to rack up fantasy points. And he was a below average producer with his chances in 2018.

I’m sure the Broncos want to spell Lindsay, and the 228lb Freeman is a functional blunt tool to hammer home some tough yards. But I will always shy away from an inefficient back who doesn’t catch passes. There doesn’t appear to be any upside here, and only a rocky floor.

We’ve seen this monument to wasted touches dominate a backfield before and it was hard to watch. His ineptitude for scoring fantasy points was even more legendary than Jordan Howard, as Barber ranked 9th in carries and 40th (!!!) in fantasy points per game. I’m not even mad, I’m impressed!

Panning Barber does not mean I am a Ronald Jones supporter, although I thought it simply couldn’t get worse and they might as well try to see what RoJo has.  During the writing of this article, Jones sustained a knee injury which may cause him to exit stage left and allow Barber to once again see too many opportunities. Even so, I cannot support picking Barber as the upside is nonexistent.

Yikes. Coming off a beautiful 2017 season in New England, Lewis took a major step back after heading to Tennessee. Whether it was scheme fit, nagging injuries or a combination of both, he was flat out bad at scoring fantasy points in 2018. Making matters worse is the fact that teammate Derrick Henry shined in the final quarter of the season. It’s no surprise Titans decision makers have said they plan to ride Henry more from the start in 2019.

I love sneaky pass catching backs for fantasy, but this does not seem to be the dart to throw. Lewis will also turn 29 this year which is approaching the danger zone for RBs. Hard pass.