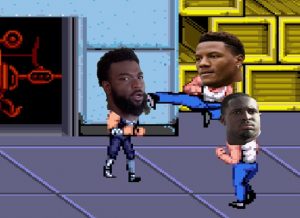 ADP Royal Rumble IV will throw some buzzworthy RBs into the cage and see what transpires: Damien Williams, Chris Carson, and Sony Michel. These RBs are separated by about 4 picks on average but only one can be the champion. At this point in the draft you’re realistically hoping for an RB2 who can challenge for top 10 production. Now, without further ado, let’s get ready to RUUUUUUUMMMMMBBBBLLLLEEEE!

A running theme for this ADP battle will be that opinion changes on these RBs every day. For Sony, the key factors that drive his ADP are health and the potential for increased receiving production. It was surprising to see his 2018 ppg rank barely in RB3 territory, of course the last thing we saw was Michel rushing for 336 yards and 6 TDs in New England’s 3 postseason games.  During the regular season he was only a top 10 RB twice despite registering 209 carries including double digit carries in all but one game. He was a fairly consistent part of the Patriots offense but his production for fantasy was extremely touchdown dependent.

He had an offseason knee scope that scared drafters away, but is now back practicing and maybe more importantly, he is catching passes from Tom Brady. Michel’s lack of pass game use really limited his upside in 2018 but if he can chip in 30 catches that could help stabilize his hefty bust rate from last year. At the end of the day, the Patriots still have James White, and Michel’s limited utilization and brutal weekly floor is enough to land him in 3rd place here. I wont be drafting him often but I will be watching his snap count and targets early on to see if he could be an in-season buy.

Carson is a steady riser this summer as praise reports continue to come in from Pete Carroll and Brian Schottenheimer. The most recent development is that they are actively designing ways to throw him the football, which would be a massive boon for his fantasy projection. Carson is coming off a 267 touch campaign, in which he finished as the RB16 on the 11th most touches. This may have to do with a little bad TD luck combined with the fact most of his touches were carries.

If he can add 25 more receptions to his total workload, Carson would challenge for a top 6 RB touch total. This is where his potential starts to get exciting. After busting only 21.4% of the time in 2018, he is already a very safe RB2 but adding more pass catching opens up his ceiling for a top 10 finish at the position. While he is a very intriguing pick at ADP, I am awarding Carson 2nd place in a close decision.

Damien exploded into fantasy relevance scoring 147.1 PPR points on 105 touches over his 6 games as Kansas City’s feature back. That comes to 1.40 PPR points/touch (p/t), which would be third best behind James White (1.53) and Duke Johnson (1.52) of backs with a minimum of 80 touches. Even Kareem Hunt, as good as he was before suspension, accrued only 1.11 p/t.  It is possible that Damien Williams, who toiled in the shadows of Miami for 4 years before signing as a special teams asset with the Chiefs, is one of the NFL’s best backs. More likely is that he succeeded in a hyper efficient offense that was clicking on all cylinders in 2018. However, with that same offense intact, this is still actionable for fantasy.

Many in the community are citing that he has never had over 50 carries in a season, and he only saw more than 15 carries in one game last year. I would counter with the fact he still averaged 17.5 touches/game after taking over feature duties. Over a 16 game season, 17.5 touches/game would put him at 280 or roughly 6th in touches last year. If more of those touches are receptions instead of carries, that’s perfectly fine. Of course, much of the hand wringing is over whether or not he’s the “starter” but I am confident as of today he’ll see most of the backfield work. Damien is back in practice with the 1st team and beat writers are whispering that Carlos Hyde may be cut. Even assuming a decline in scoring efficiency, with an ADP of RB21 Damien Williams can coast to 15 premium touches/game and give you a sparkling return on investment. However there is also true league winning upside if he commands the backfield for 16 games. That is exactly the profile it takes to win an ADP battle.