Well, here we go. What? You didn’t get enough Jackie Battle news this past week? What about Tony Fiammetta? Breaking! I just signed Terrell Owens, and all it cost me was a Subway Tuna sandwich. Yeah, I know I overpaid. But, to be fair, there wasn’t any mayo, so I had that going. But enough about me, let’s take a look at some of the key news that’s happened so far during free agency week, all through the fantasy football scope. That scope is real by the way. I’m serious. It has chrome plating and comes with a bottle-opener.

So after the Saints made it clear that they were releasing Darren Sproles, they go and trade him to the Eagles for a 5th round pick in this year’s draft. Which, fun fact, is a lower return than they received for trading Chris Ivory to the Jets last year (4th Rounder). Fantasy-wise, you have to pleased with the idea of Sproles operating in a Chip Kelly innovative TM offense. Call it a tiny step for an improving Eagles team. Get it? In fact, to celebrate tiny Darren’s arrival, Iggles fans are going to throw AAA batteries this season. On a serious note, this might affect LeSean McCoy‘s workload in the short-term, enough to give Jamaal Charles the edge in most rankings. But he’s still a top-5 back, and I’d still consider him second overall unless something drastically changes. 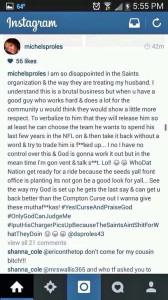 What will be more interesting is how this Compton Curse might play out. You’d think New Orleans would be used to such dark and mystical things like curses, hexes, black magic, and, you know, the gentrification of hipsters.

Eric Decker is a good player and a consistent fantasy asset. He was probably on his way for at least another 1000 yard season with 10 touchdowns if he stayed with Denver. But moving from Peyton Manning to Geno Smith didn’t do his fantasy projection any favors. As of now, I’m seeing a season closer to his 2011 production (612 yards, 8 TD’s) and this move will certainly drag his 2014 ranking down.

After 13 years, the Panthers have cut Steve Smith. Yeah, he’s getting older and has probably lost a step or two, but it’ll be interesting to see where he ends up. In the right system or with the right surrounding personnel, i.e. a WR1 already present on a roster, there’s an interesting fantasy receiver still here. Or he could be signed by the Bills and commit fantasy seppuku.

To stick with the receiver theme, Golden Tate now finds himself in Detroit. No word if we need to send in a rescue party yet. Having Calvin Johnson suck all of the defenses attention is certainly a boon, but I want to see how the offense will operate with Jim Caldwell. The resigning of Joique Bell and the presence of Reggie Bush with a new-found commitment for balance will be a factor.

Run DMC still a Raider. Jennings now a Giant among men. It’s the best I could do.

Nothing much to see here. Just a guy who’s missed 19 games in the past three years. Darren McFadden has never played in more than 13 games in a season, and in the past two years, has just averaged 3.3. yards per carry. The team isn’t good, the Quarterback situation is laughable, and the offensive line is a wait n’ see project. But now that Rashad Jennings  is on the New York Giants, Latavius Murray might be a guy to keep an eye on. Speaking of Jennings, even with Peyton Hillis re-signing, he deserves a look. With David Wilson coming off of spinal surgery, and his propensity to fumble the job away, I’m not sure what the split will look like yet. You have to figure there’s still some nice production be had, even in an Andre Brown type role.

– I don’t really care about Toby Gerhart going to the Jaguars. Sorry I’m not sorry.

– Donald Brown going to the Chargers and Philip Rivers checkdowning ways is certainly a good career move, but it doesn’t shake the fantasy core much. The Chargers depth chart and Brown’s lack of being able to do anything rational during third downs still limits his value.

– Jonathan Dwyer has been a bust for almost half a decade, but the size and tools are still there. He’ll probably siphon carries away from Andre Ellington, much in the same way Rashard Mendenhall did. So the moral here is “ef the Ellington owners” I guess.

– Josh McCown is now your week 1 starter in Tampa Bay over Mike Glennon. Lovie Smith sure doesn’t mess around, and apparently scoffs at young Quarterbacks. Not that Mike Glennon is Andrew Luck or anything, and, more importantly, this move doesn’t change Vincent Jackson‘s outlook much either. Sure, McCown had a nifty four-game stretch… but he’s a career journeyman that hasn’t really done much else, so I call this move ‘neutral’ with a side of ‘Let’s talk more about Doug Martin. But not really, because he ruined everything’.