We like short shorts. But on guys with tree trunks for legs who sport a mustache that makes Grey jealous? Yes, me likey. Me likey very much, but only when it comes with fantasy goodness. Who am I kidding? The fantasy goodies are just a bonus because Gardner Minshew is awesome on and off the field. 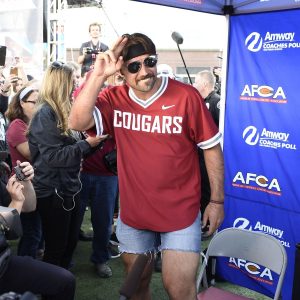 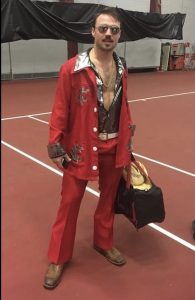 If drafting in a league with swag as a category, Minshew is a top ten pick. Unfortunately, we are simpletons and haven’t evolved to that level yet. As it stands, touchdowns, yards, and interceptions are all we have to go on. Last season, Minshew finished as the 20th quarterback in fantasy points scored. He played 14 games. According to FFPC ADP for 2020, Minshew is being selected as the 26th quarterback and 156th overall player. Minshew is a screaming value and should return a handsome profit for those who invest.

Gardner Minshew is 6′ 1″ and 225 pounds. He began his college career at Northwest Mississippi Community College in 2015, leading them to the championship. He then played 17 games over two years for East Carolina, before transferring to Washington State University, where he piloted the team to a school-record 11 wins and led the FBS in pass completions, pass attempts, passing yards per game, and finished with 38 touchdowns. He was awarded the Johnny Unitas Golden Arm Award, named the Pac-12 Offensive Player of the Year, and finished fifth in the Heisman Trophy voting.

The knocks on him during the draft process were that he possessed average to below-average arm strength, wasn’t tall enough at 6′ 1″, a one-year wonder, and flourished in a system which didn’t ask him to make full-field reads. I never understood the last critique because the Air Raid system spreads the field out and requires the quarterback to read the defense, sideline-to-sideline and high-to-low. Anyways, as a result, he wasn’t drafted until the sixth round in the 2019 NFL Draft, where the Jaguars scooped up his awesomeness.

Nick Foles was slated to start last season, but suffered an injury in the first game. Enter Minshew. There were highs (374 yards and 2 touchdowns in Week 5 against Carolina). There were lows (getting benched for three weeks when Foles returned from injury). At season’s end, though, he finished with a line of 285 completions on 470 attempts (60.6%) for 3271 yards, 21 touchdowns, only 6 interceptions, 7.0 yards per attempt, and added 344 yards on the ground.

I did a query on Pro Football Reference. How many rookies in the history of the NFL have passed for at least 3000 yards in a season with at least a 60% completion percentage, less than 10 interceptions, and at least 300 yards rushing on the ground?

Matt Waldman, who created the Rookie Scouting Portfolio and writes for Football Guys, wrote this about Minshew:

“Minshew was my No. 9 quarterback prospect. But as you’ll read (and I annually implore my readers to weigh the content more than the ranking spot), he was among the most conceptually-sound passers in this class and a player with starter upside and a player I wrote was much closer to my first tier of quarterbacks in this class than the bottom of the second tier. I also projected Minshew in my rankings tables (found in the publication) as a potential second-contract starter.”

Minshew can play folks. And he wasn’t a dink-and-dunk hero either.

Sure, the 4.97 40-time (24th percentile) and 54 mph throw velocity (38th percentile) are doo doo, but his intellect, composure, and pocket awareness allowed him to produce one of the all-time great, rookie seasons for a quarterback.

First and foremost, the Jaguars did not spend draft capital on the quarterback position. They also did not bring in a high-profile free agent name. The gig is his for this year, and potentially for the future if he takes the next step and balls out. With the short shorts, how can they not be?

Secondly, the Jaguars upgraded the options in the passing game by signing running Chris Thompson and tight end Tyler Eifert. God bless Leonard Fournette and his 100 targets last season, but the addition of Thompson to the mix will make the passing game much more potent. Dede Westbrook, D. J. Chark, Chris Conley, Thompson, and Eifert make for a formidable passing attack.

Finally, Jay Gruden was hired to be the new offensive coordinator for the Jaguars. You may dismiss him, as the last few years in Washington have been rough, but look at his history when he has had good quarterbacks. In 2016, with Kirk Cousins at the healm, the team ranked 3rd in offensive yards, 12th in points, and 7th in passing attempts. Cousins finished as the #5 quarterback in fantasy that season. In 2013 with the Bengals and Andy Freaking Dalton at quarterback, the team ranked 10th in offense, 6th in points, and 8th in passing attempts. Dalton finished as the #5 quarterback for fantasy that season.

There is risk with Minshew, as he fumbled the ball a lot last season (13). We may also have seen his ceiling already, due to the physical limitations and fact that there is now a year’s worth of tape on him. Finally, with the Jaguars projected to win only 4.5 times next season, will the front office employ Project Tank for Trevor and hand over duties to Mike Glennon?

It’s within the range of outcomes, but I’m eschewing that possibility. Factoring draft cost and potential ceiling, get a clue and draft Gardner Minshew.