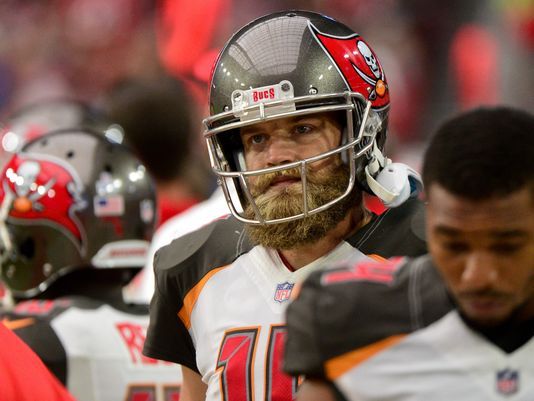 Ryan Fitzpatrick – I know that there’s no Mike Evans for him this week, but the extra revenge angle makes this an interesting play for me. Plus, let’s not forget that the last time we saw him in extended action (@ Arizona in Week 6 when Winston originally got hurt), he posted a good stat line. If Fitzy can make you remember a name like Luke Stocker last week, he should be able to mix it up a bit and get moderate production from Desean Jackson, Cameron Brate, OJ Howard, and Adam Humphries. One other thing to point out – Fitzpatrick added 30 yards on the ground against the Saints. While not viewed as a rushing quarterback at all, there was what looked like a designed quarterback draw, a nice scramble, and he was decently alert in the pocket. It’s interesting to note that Jameis hadn’t topped 15 yards rushing in any game this year. And he did that stupid pregame thing eating the W. So that’s strike 2 Jameis. Give me all of the Fitz.

Case Keenum – Member when Case Keenum went to London and played pretty bad for a half and almost made my Brows D before he stormed back in the second half to remind us why we don’t rely on Browns? Pepperidge Farm members. And so does this guy right here. I give him props for making the adjustments, though he didn’t necessarily have to overcome a hostile environment or anything. Regardless, he gets the nod against the Redskins this week even with Teddy Two Gloves nearing activation. For fantasy purposes, I actually think Keenum would be a better play than Teddy. If Case would like to make his own, well, case to remain the starter – he might want to start by producing against this Skins.

Charles Clay – Owned in 26% of Yahoo leagues? Who cares if Kelvin Benjamin is in town, this guy needs to be more owned than this. I know the Saints D is tough, but should he go, the expectations should be tempered the first week back a little regardless. But if he goes bananas, you’d rather be holding the ticket than being caught in the rush. Plus, if you are fairly certain your playoff ticket is already being punched, he gets two home games to start off the fantasy playoffs against the Colts and the Dolphins. If he’s not your starting TE, in those matchups he would probably make a damn good flex.

Vernon Davis – Is this a time loop? I was just kidding with all the time stuff in the intro. Vern made this space last week and produced for us, so let’s let it ride on VD. Jordan Reed or not. F*ck it. (But really Jordan Reed, this pick looks better if you don’t play).

Tyler Kroft – Another guy that will probably make this space every week until his ownership percentage goes over the cut off point (he currently sits at 52% as of this writing). While AJ Green might have his eyes set on a big game after his shenanigans last week, I think there could still be enough to make Kroft streamingly relevant, even with the Titans being a fairly stingy defense against tight ends on paper.

Saints D/ST – I can only keep beating these drums for so long. They are on their way to Mafia territory against the Bills this week, but if Lesean McCoy and be somewhat contained, I don’t see Tyrod having another outburst of a week, even with Kelvin Benjamin in fold. We’ve seen him struggle to get on the same page with new weapons this year in Jordan Matthews and Say Jones. While Benjamin may have more talent than both, it’s still going to be a work in progress. But the Bills don’t have time to let the chemistry come natural. If they want to make a playoff push this year and find themselves down, they won’t be content to run vanilla to get in reps. They will be trying to take shots, and that’s where this opportunistic defense can play big.

Bears D/ST – Every time I watch the Bears this season (which happens a lot more on Sundays than I’d prefer with my girlfriend being a Bears fan), I come away with a generally positive outlook on their defense. In fact the only game they really got lit up was against the Packers when Rodgers threw 4 TDs  against them on less than 200 yards passing. News flash – Brett Hundley isn’t Aaron Rodgers. It doesn’t make me feel warm and fuzzy, but in a deeper spot, I’d Bear Down and roll out Chicago betting on further Green Bay chaos.

Josh Lambo – ISN’T ANYONE LISTENING TO ME! Three field goals last week for limbo including a 56 yarder. LET IT RIDE!!!

Until next week, see y’all in the comment section!