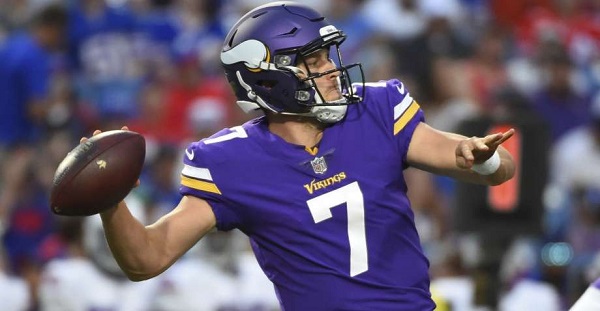 Welcome to Week 11 sports fans. The playoff grind is real. And even if you’e out of it, I encourage everyone to embrace their inner troll. Play the spoiler. Make it harder for other teams in the playoff hunt to reach that ultimate prize. Find the streamer that upsets a top team and knocks them out of that first round bye. Turn these last games of the year from jockeying for seeding into must wins to make the dance. But just make sure to leave that troll persona locked into your fantasy team, because those shenanigans don’t fly ’round these parts you hooligans. In this spot, we go streaming! As always, I take a look at players owned in less than 65% of Yahoo leagues after the waivers have run on Thursday morning. Miss the rush? Bring that green hat Snoop-a-loop and let’s find us a winner or two.

Case Keenum – It’s a big week for Minnesnowta. In a matchup of 7-2 Vikings and Rams, this game could have bigger ramifications at the top of the NFC playoff picture. Keenum made this space last week, and earned his spot in it this week just like he earned his spot on the field over Teddy Two Gloves. Adam Thielen and Stefon Diggs have been great plays this year and while this Rams unit ranks high in a lot of defensive metrics (notably 2nd in the league in defensive passing DVOA), they haven’t seen much this year in the way of elite quarterbacks. Not that I am saying Case Keenum is an elite quarterback, but I think he’s in the top third of what the Rams have seen so far. I don’t know what to expect in this game. Defensive slobberknocker? Effective Jared Goff? I imagine we’ll be hearing a lot of that damn Viking horn and hopefully it’s as Case is unloading more TDs for your squad.

Eli Manning and his stupid face – So as I’ve been writing this article this year, I’ve thought about what I should be expecting from guys I put in this space. Streaming a QB? I want 250-275 yards and a pair of TDs. The Chiefs have been one of the more generous defenses in football this year. I know they play tight ends well (only given up 1 touchdown to tight ends), but Evan Engram is having such a phenomenal year. I can’t quit this kid. Plus Sterling Shepard has been a boss since his return and may be setting up to reward owners who stuck with him through his injury hurdles this year. I’m hoping that with Orleans Darkwa producing in the rushing game it will give Kansas City something else to think about. Just put Eli in your lineup and don’t watch the game.

Vernon Davis – He’s right at 65% ownership as of the time of this writing. I know the Saints are the cats pajamas, but the role here is enough to roll the bones on, especially if they are weighted in my favor with Jordan Reed missing practice this week.

Marcedes Lewis – The tight end landscape is known to be full of a lot of blah. So sometimes we have to get crafty down here. I know everyone expects Leonard Fournette and the Jags other backs to jam the ball down Cleveland’s throat. But let’s say they do pass. Bortles has actually been sneaky decent recently. Over the last 5 weeks, he’s been the 16th best quarterback on a fantasy points per game basis. And where might he attack against this Cleveland defense? Well they may be watching the 7 TD receptions the Browns D has given up to the tight end position. It’s a long stretch, but sometimes that’s what we do around these parts.

Chargers D/ST – There’s a couple good matchups to play this week against sub-par offenses, but this one is my favorite and will be the most available. Not just with newly named Nate Peterman under center, but this Chargers defense can get after the quarterback. The Chargers are tied for second in the league with 29 sacks, a season highlighted by Joey Bosa and Melvin Ingram. The Bills are just this random clusterf*ck of a team and I think that the Bolts can create enough confusion to make a solid stream this week. I mean come on. It’s Nate Peterman.

Bengals D/ST and Packers D/ST – I couldn’t decide which matchup I loved more so I decided to throw both in. Green Bay get the Ravens fresh off their bye week while the Bengals battle back up quarterbacks from Denver. I don’t think we’re going to see 52 pass attempts from Joe Flacco again, and even still… 260 yards? That’s it? I’d still expect him to be a bigger headache for the Packers than Brock will be for those Bengals. But I think either would be serviceable for your playoff push if you can’t get the other two mentioned above.

Josh Lambo – The Jags are playing the Browns.

Dan Bailey – Don’t forget about this guy. The Cowboys at the beginning of the season were converting everything into touchdowns, which limited his value a tad. Now a Zeke-less Dallas team will look to put the points on the board in other ways. And when this guy is healthy, he’s pretty good.