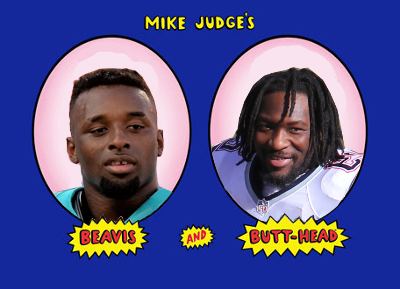 I am the Great Cornholio! I need TP for my bunghole! And I could also use a few players to help me win my fantasy football playoffs. In 1993 Mike Judge gave the world the incredible gift that was Beavis and Butthead. Thank you Mike Judge. These two morons provided me with endless hours of entertainment and laughs. The adventures of these two legendary rock loving teenage delinquents originated from Frog Baseball, a short film by Judge which aired on Liquid Television in 1992. After seeing Frog Baseball, MTV contracted Judge to develop Beavis and Butthead. One of the best parts of the show was when these two idiots would sit on their couch watching music videos, offering their humorous and absurd commentary. As outrageous, lewd and immature as the show was, it was equally as funny. The dynamic couch sitting duo even reached the big screen with Beavis and Butthead Do America in 1996 and then made an encore appearance on MTV in 2011.

Anyone who knows the first thing about fantasy football would think that the following lineup was set by none other than Beavis and Butthead. I can just see them now giggling as they are trying to set the lineup. Perhaps it would go something like this…

“Hey Butthead. How about this butt munch. He he he….”
“Shut up Beavis. I’m trying to order a meat and burger.”
“Oh yeah! I’m hungry. Can you get fries with that?”
“Settle down Beavis. Hold Stedman. This is only going to hurt for like a minute or something.”
“Move over Butthead. It’s my turn. Pick Johnson. Yeah! I like him. I like Johnson.”
“I bet you do Beavis. You like johnson. He he he he he he he…”
“Shut up Butthead. I don’t like Johnson. You like johnson. This sucks!”
“Hey Beavis. My list includes any girl with at least one boob.”
“My list is like your list, but it also includes your MOM.”
“Thinking sucks. This guy is smoking a blount. Coool. We’re gonna score…”
“Shut up Butthead, we’re never gonna score, everyone here has probably scored. This old lady probably scores.”
“Dammit Beavis, you just sent my boner to the ground…”

Enjoy some of the best Beavis and Butthead clips… 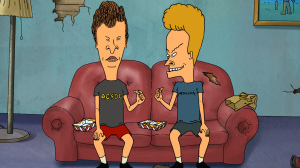 Despite Beavis and Butthead’s best efforts to derail your playoff chances, the following lineup combined for 165.3 points and likely would have won any head to head match-ups in Yahoo! half point leagues.

But how many of these fart knockers are worth rostering at this point in the season?

Latavius Murray looked great. Granted he only carried the ball 4 times before exiting with a concussion, but he did more in those 4 carries than most players did in all of Week 12. Latavius ran for 112 yards and 2 touchdowns and looked great doing it. His status is still up in the air for this week’s game as he sat out of Monday’s practice, but if you have a turd burglar sitting on your roster that you can part with, Murray has the potential to pay nice dividends over the next few weeks. He might also have to join Martavis in my fake Gladiator sequel.

Pittsburgh didn’t want him so Bill Belichick and the New England Patriots welcomed him back. How did he repay them for giving him the opportunity? How about 12 carries for 78 yards and 2 end zone celebrations. He looked good, but so did Jonas Gray the week before who finished this week was zero touches. Blount make Jonas fade from gray to black. As tempting as it might be to grab Blount, I just wouldn’t have any confidence starting him. I said the same thing about Gray last week and I’ll say it again this week, you cannot trust a Patriots running back. Especially during fantasy playoffs. Be like the Steelers and let him be someone else’s problem.

How about the Patriots’ tight end that scored 2 touchdowns? You mean Rob Gronkowski? Wrong! That would be Wright who had 5 catches for 36 yards and the 2 aforementioned touchdowns. But can he be relied upon? I don’t think so. It all comes down to playing time. Last week he saw a season high 61 snaps. Before this he hadn’t seen more than 21 snaps. We all know that Gronk is the guy in New England, but Wright has the potential to be a sneaky play from week to week. But like Blount, I’m letting him be someone else’s sneaky play as I stick with Delanie Walker.

In the past 4 weeks Jarvis Landry has combined for 24 receptions, 205 yards and 4 touchdowns. That’s an average of 6 catches, 51.5 yards and a touchdown per game. That sounds like double digit fantasy points is standard leagues and 14.5 in half point PPR leagues. I like the consistency he has shown over the last month and if we weren’t done with bye weeks, he be someone I highly suggest adding. At this point however, I’m not sure he cracks many starting lineups. But if you have a dill hole like Vernon Davis on your bench you’d be better off dumping VD and snatching up Landry. Hehe, he said “snatch”…

While the Minnesota Vikings offense isn’t one we should rely upon, Charles Johnson is emerging as Teddy Bridgewater’s favorite target. Last week he caught 3 of 11 targets for 52 yards and a touchdown. That’s a low reception to target ratio, but Bridgewater seems to keep going back to him. I see some promise here, but not enough for me take a chance on him at this point in the season.

Who needs studs? Not me. I’ll be back next week with another list of pecker woods that would get you sent to Principal McVicker’s office quicker than stealing Mr. Anderson’s mower… 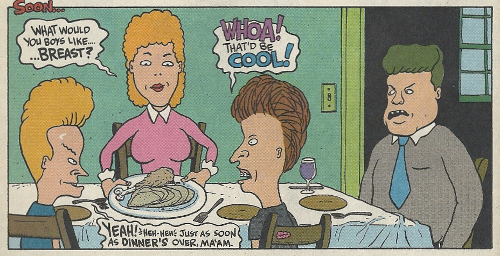