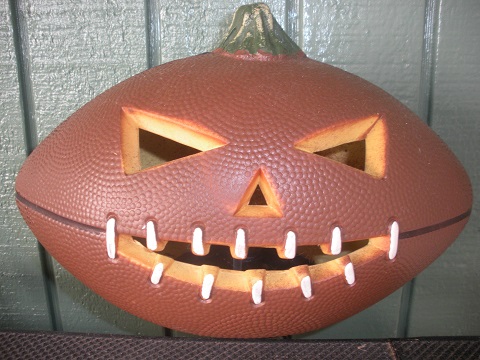 All Hallow’s Eve is nearly upon us, and I hope you have your costume picked out. I’ve got a few late nights ahead of me to finish mine, but I expect to be ready in time. Halloween is one of my favorite days of the year. What’s better than drunk adults wearing costumes acting like children? Honestly, not much. One year I saw a guy dressed as Daniel LaRusso in the shower get punched in the face by a dude wearing a Cobra Kai jersey while he was smoking a cigarette outside a bar. Another time I saw a dude dressed up as the Teen Wolf crushing beer cans with his teeth as he spun a basketball on his fingertips. But I’m not sure anything can top seeing the Ultimate Warrior in a speedo running down the middle of a main street in freezing weather in typical Warrior-like fashion.

How about a few NFL players last week that put on their uniforms and masqueraded about as fantasy studs?

The following list of guys probably wouldn’t even have gotten invited to the Halloween party, but would likely have ended up winning the best costume contest. Combining for 172.92 points these studs for a week would likely have won any head-to-head match-ups in half point Yahoo! leagues.

But how many of these players are worth rostering after Halloween is over?

I’ve been telling readers since week 2 to grab Andrew Hawkins. He has scored double digit points in 5 of his 7 games and had his best game of the season last week with 7 receptions for 88 yards and a touchdown. Ignoring week 6’s game against Pittsburgh, Hawkins has had at least 3 catches in each game and is averaging over 5 per game on the season. If Andrew Hawkins is available in your league, he shouldn’t be in about 3 minutes.

While I have a hard time trusting anyone on the Jaguars offense, Denard Robinson now has two consecutive 100+ rushing games in his first 2 starts. Gerhart is horrible and unfortunately Storm Johnson didn’t seem to get off the ground. That makes Denard the starting running back in Jacksonville and a viable fantasy starter in most leagues. I would definitely own Robinson.

While Heath Miller probably benefited from the Steelers’ huge offensive day, he is still someone I’d consider picking up as a bye week replacement. And while in Pittsburgh, move over Markus Wheaton, make room for Martavis Bryant. In the games he has played he has combined for 7 receptions, 123 yards and 3 touchdowns. That’s a 24-touchdown pace! I’m not suggesting you drop a guy like Mohamed Sanu or Terrence Williams, but if you’ve got a guy like Dwayne Bowe or Harry Douglas, I’d consider making the switch.

Taliaferro now has 4 touchdowns in 6 games. He also has two games in which he has scored less than 2 points. Justin Forsett is the running back to own in Baltimore, but if you’re desperate, you could do worse than Lorenzo. You could also do better.

Who needs studs? Not me! I’ll be back next week with a new list of Halloweeners that will be sure to dress up your roster.