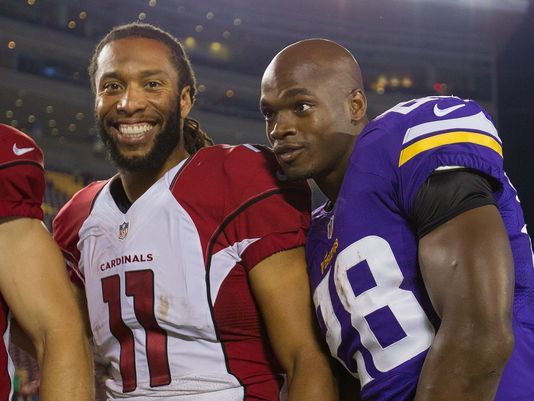 Adrian Peterson is free! On Tuesday, AP was traded from the New Orleans Saints (who seemingly never wanted him?) to the running back-desperate Arizona Cardinals. He is here to save the day for all fantasy owners who stashed him through the first few weeks or were able to submit a successful waiver claim for him after the trade. Our prayers are answered. All is right in the world. Rejoice! Rejoice! Rejoice!

Well, kind of. There is no doubt that getting traded from the pass-happy Saints, where Peterson was an odd fit from the second they signed him, to the Cardinal who lost David Johnson in Week 1 and have gotten zilch from the running back position in the weeks since, significantly improves Peterson’s fantasy value. The questions we have to answer now are: just how much has it improved? And what exactly can we expect going forward?

In the last few weeks, AP was not seeing regular touches, and his value was pretty much nonexistent. When he signed with the Saints in the offseason, you could hear a collective “huh?” from football fans and writers everywhere. We gave the Saints the benefit of the doubt and figured they knew what they were doing, but it turned out exactly how we all thought it would. Peterson was an odd fit for a Saints team that likes to pass the ball and likes to operate out of the shotgun, two things that don’t mess with Peterson’s style. Add to that the presence of Mark Ingram and youngster Alvin Kamara, and it is no surprise the team moved on from AP.

With the Cardinals, Peterson should get plenty of opportunities. Chris Johnson has not looked good in a couple years now, and he was a free agent until David Johnson got hurt. With Peterson entering the fold, the Cardinals did not even wait a week or two before cutting CJ. He got cut to make room for AP.

There are, however, a few reasons to roll our Peterson optimism back to “cautious optimism.” For starters, he is moving to a new team with a new playbook in the middle of a season. The complexity of NFL playbooks and schemes is why we don’t see a ton of in-season trading in the NFL. It is very difficult to fully learn everything while also preparing to play every week. To start out, they are going to have to feed him plays in bunches and get him acclimated a little bit more every week. Early playing time/snaps are question marks for Peterson right now.

Next, there is the issue of the Arizona offensive line. They’re bad. They’re really bad. They are particularly bad at run blocking, which is the primary reason the Cardinals have struggled so much on the ground this season. If they can’t open up some room for Peterson, he might have a fairly low ceiling in Arizona.

Lastly, the Cardinals are another team that likes to throw the ball. Carson Palmer currently leads the NFL in passing attempts. Part of that is likely because they have struggled to run the ball so much that they have been forced to pass, but they are not going to flip the script and decide to run the ball 60% of the time just because Adrian Peterson has arrived. Peterson is not much of a pass-catching back, so will he get enough touches to be valuable on a weekly basis for fantasy owners?

These are all valid questions that cause concern. Of course, the upside with Peterson is definitely worth taking the chance on him, even if just to stash him for a couple weeks while you see how he looks in that offense. Just don’t get your hopes up too high until we actually see him getting the ball with some space to work with.