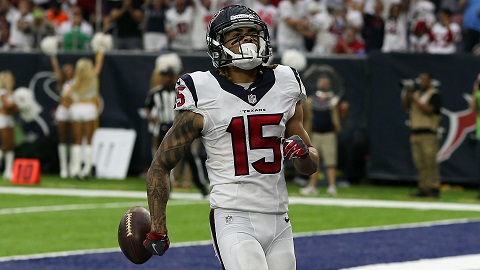 Welcome back, my horde, to the first official hit it or quit it for the 2016 season!  Sure, I teased you all a little bit with some of my draft and preseason action, but this is the real thing, baby!  Hopefully, you all made it through week 1 without my “Black Widow Curse” taking out your first round draft picks?  I know I made it unscathed this week.  I think I am finally getting the hang of this thing and embracing the evil that is this curse rather than trying to fight it.  I know a couple of you lost some people, and for that, I wish I could say I was sorry, but I am embracing the evil, remember?  So, at least I can make it up to you some way by maybe giving you some people to target this coming week.  Because, after all, I am not a girl who just takes.  I know the importance of giving as well as receiving, especially if we are going to make this love affair last.  So, without further ado, here you are my loyal creeps, weirdos, perverts, geeks, convicts, inmates and overall degenerates, Hit It or Quit It, Week 2.

Will Fuller, WR, Houston Texans – There was some speculation that Will Fuller, being an NFL virgin and all, would have a lot to live up to, especially playing opposite DeAndre Hopkins, but Week 1 showed us what I have been telling you all along, even virgins know what they are doing.  It’s kind of like a natural talent with some of them, I suppose.  In Week 1, Fuller managed 5-of-11 targets for 107 yards and a touchdown in Houston’s win over Chicago.  Despite some prior speculation that his hamstring injury (which seemed to slow him down all week) was going to limit his playing time, he showed no signs that this was the case.  Sure, he dropped a potential would-be 83-yard score in the second quarter, but that is to be expected.  We can’t all be as perfect as me.  Bottom line is, he has some big-play potential and at only 40-50% owned in most leagues, you may be able to snatch him up as an upside WR3 in week 2 against Kansas City.  Go on, you know you want the untainted meat.  Do it.  Hit it.

Keenan Allen, WR, San Diego Chargers – This one is a no-brainer, but undoubtedly, there are those of you out there who, for whatever reason, were not able to come out from under your rocks and did not hear that Allen tore his right ACL and is out for the season, because I see that he is still owned in 98% of leagues.  And yes, waivers haven’t hit yet (that’s later tonight), but I can’t tell you how many owners leave a player like this on their bench. Sure, you can hold out hope that he will be back, but we all know how it goes with ACL’s.  Sorry, Keenan, it seems you were the first prey of my Black Widow Curse this season.  If you are a Chargers sympathizer and really want to stay in-bred with the team, you can always look for Travis Benjamin or Dontrelle Inman to see more work.  Or, if you are feeling particularly randy, Danny Woodhead and Antonio Gates are also in the running for more work.  Or, you could just realize when over means over and just go for one of the Hit it’s I have at the beginning of this article.  Either way, it’s your call.  Sorry Keenan, just like 2015, we’ll have to Quit it.

Chris Hogan, WR, New England Patriots – I managed to pick up Hogan in my later rounds in one of my drafts and made the mistake of benching him Week 1, consequently losing out on 13.50 fantasy points.  Sure, that may not seem like much to most of you, but I am a point whore and want to suck them up as much as possible.  But I digress.  Hogan played 56-of-73 snaps in Week 1, roped in 3-of-4 targets for 60 yards and a 37-yard touchdown on the opening drive.  He is only about 30% owned in most leagues, but this may be one pick-up you want to try to snatch.  Sure, when Gronkowski returns, Hogan may not see quite as many targets, but bottom line is, unlike many of my first dates, Hogan made quite the impression and may have played Brandon Williams right out of a job.  My beloved Pats have Miami in Week 2, so consider Hogan your WR3/4 and go to town if you need it.  You know you want to.  It can be our dirty little secret.  Hit it.

Tyrod Taylor, QB, Buffalo Bills – This Quit it pick surely won’t win me any love with Tehol Beddict, but let’s face it, I could pretty much do anything and Tehol would still love me anyway, right, Tehol?  Anyway, back to this…Taylor took some pretty nasty hits in Week 1 along with two sacks which left coach Rex Ryan to question if his team had the ability to keep Taylor safe all season.  Taylor did manage to complete 15-of-22 passes for 111 yards and didn’t get intercepted, so that’s something right?  Taylor only managed to garner fantasy owners 5.5 points this past week, and if he continues to take more hits as often as he has in Week 1, then don’t expect him to be able to make it all season.  There are other options out there.  Go on and love him, just do it from a distance like the stalker living in my bushes.  Quit it.

Tevin Coleman, RB, Atlanta Falcons – Do you like to double up on your fun?  I know I do. Hey, I think I have already established that I am one of a kind, right?  It seems that Atlanta likes the double-team as well, and Coleman is part of that juicy goodness.  He teamed up with Devonta Freeman in preseason and it seems like that duo has carried their experience over to the regular season with Coleman seeing 32 snaps to Freeman’s 36.  On the other hand, Coleman seems to be carrying the workload in this duo finishing week 1 with 117 yards on 13 touches while Freeman rubbed out 40 yards on 15 carries.  Coleman also bailed out Matt Ryan a few times turning check downs into some big plays.  When it comes to threesomes, someone always ends up doing most of the work and for now, it looks like that someone is Tevin Coleman.  Expect Coleman to continue to have an expanded role in this offense.  If you are in the market for an RB because my Black Widow Curse took yours out, don’t be afraid to get a little frisky with your action.  Coleman is only about 42% owned in most leagues.  Go on, Hit it.

Jimmy Graham, TE, Seattle Seahawks – I remember the good old days when Jimmy Graham was the top pick in drafts and no one said anything about someone picking him over a WR or RB in the early rounds.  But lo, those days are long gone.  Even a change of scenery does not bode well for the once mighty Graham.  After rupturing his patellar tendon last season, it is uncertain if Graham will be back to his former glory and if so, how long before the bottom falls out again.  Right now, he is not seeing a full complement of snaps and will not be a fantasy option until he proves himself and shows that he can at least handle half of the weekly snaps.  If you are feeling particularly sentimental for the good old days, you can always feel free to stash him as a TE2, but with a lot of other healthy and fresh meat out there, there should be no reason to.  Sorry Jimmy, it’s not you, it’s me…oh, wait, that’s right, it is you.  Quit it.

Mike Wallace, WR, Baltimore Ravens – Look, we have all been in relationships in the past where it just hasn’t worked out, right?  Okay, well, Mike Wallace just happens to be in more of those than most of us, but it seems that he finally found “The One.”  Okay, I also know what you are about to say…”Baltimore has a deep receiver corps and he will probably not see that much playing time…blah, blah, blah…”  I am sorry, I thought we were playing Fantasy Football here and not planting petunias?  It is a shame when a woman has bigger balls than you, but when that woman is me, it is expected, so onward, shall we?  Wallace caught 3-of-6 targets for 91 yards and a touchdown in Week 1.  He shared some time opposite Steve Smith, Sr, but only saw three less targets than Smith’s team high of 9.  He also seems to have found the right one with his relationship with Joe Flacco since the two of them connected for a 66-yard touchdown after Wallace blew by Duke Williams.  Still not convinced and caught up in that receiver corps bullshit?  Okay, well, first, get your dick out of your wife or girlfriend’s purse and remember, Wallace has the best chance to lead the team in yardage and big play action.  Take a risk and go for some thrills.  You need a WR and Wallace can finally give it to you the way you always wanted him to.  Hit it.

Gary Barnidge, TE, Cleveland Browns – [Jay’s Note: This post was written before RG3 was placed on the IR…] He may be pretty to look at, but that’s about it.  I like a man who is good with his hands and after his Week 1 performance I think it is safe to say that Barnidge is not good with his hands.  He was targeted twice and both times dropped the passes.  He also does not seem to fit in well with Robert Griffin III who seems to like to challenge defenses on deep passes.  Add in the fact that even with this, RGIII has a pretty decent receiver corps with Terrelle Pryor and Corey Coleman.  Also, don’t forget that Josh Gordon will be will be returning soon as well.  Sure, Barnidge stepped up for me in 2015 when I needed a TE.  He was there for me, and I will always be thankful to the fantasy Gods for that, but let’s face it, this isn’t 2015.  Barnidge was a thing of the past and his 0.00 Fantasy points this past week should be enough for you to run for the hills.  Get your satisfaction elsewhere.  Quit it.

Well, there you have it my loyal Horde.  Week 2 of the 2016 edition of Hit It or Quit It is in the bag.  Love me, hate me, whatever, I’m the one with the article.  Remember to follow me on Twitter @Soxfan012 for all of my awesomeness and a sprinkle of shenanigans from time to time.  Until next week, remember to use a rubber!