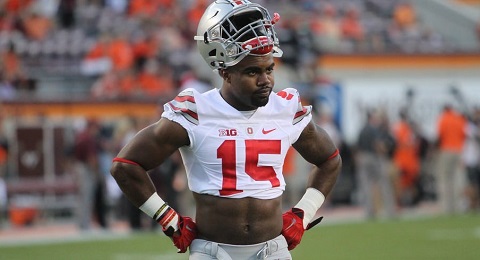 Fellow Razzballers: Before I get into the topic at hand, allow me a brief introduction. My name is Alex Lee, long-time reader/first-time contributor, and I have emerged from the desert of my Fantasy Football writing career a weary traveler, thirsty for the love of the masses. In my college years I wrote football articles for a site called KFFL, which the older amongst you will recognize as an early fantasy resource, the younger will think is a radio station, and the youngest will have no idea what I’m talking about because you’ve never heard of the site or listened to radio. Now, after an eight-year absence, I’m back to relive the glorious days of fantasy sports writing, sleeping on piles of money and being fed grapes by your mothers in exchange for small bits of wisdom. [Answers phone call from Jay] I’m sorry, I’ve been informed that this is unpaid and I will have to feed grapes to myself. Ah, what the hell, I’ll do it anyways! And if you’re in the Philly area, you can catch me doing stand-up comedy at any place foolish enough to let me on stage…

With that out of the way, let’s get into a nice, calm discussion of – what is wrong with you idiots!? As a Cowboys fan, it pains me to say this, but why are you drafting Ezekiel Elliott in the top-10?

This is less a knock on Elliott, who I do have high hopes and expectations for, and more a philosophical stand against paying a high premium based solely on surrounding talent and projected workload rather than on any actual data on the player himself. I know what you’re thinking, “But Alex, he’s a star in the making! A first-round pick! He’s going to run behind the best line in football! The same one that made DeMarco Murray an MVP candidate two years ago and resurrected the corpse of Darren McFadden’s NFL career last year!” That may all be true, but there is a difference between a star in the making and an actual, bona fide star. If you’re using the 7th overall pick on Elliott (his current ADP), you’re mistaking the former for the latter. You know who is going off the boards in the next handful of picks? AJ Green! DeAndre Hopkins! Rob Gronkowski! Dez Bryant! You know, proven All-Pro talents that you can count on to anchor your team (assuming health, which maybe in Gronk’s case isn’t the best bet). Why gamble on a rookie running back with no track record when the sure thing is already on the board?

Let’s take a little dive into the numbers to illustrate what I’m trying to get through your thick skulls. Using last year as a reference, to crack the top 10 of non-QB fantasy scoring in standard non-PPR formats, you’d have to put up over 190 points. In the past 10 seasons, only nine backs have eclipsed that mark in their first season, with four of those players being first-round, future stars such as Adrian Peterson and Trent Richardson (whoops), and five of them being picked in the second round or later, including 2012 sixth-round pick Alfred Morris (keep that name in mind). The point here is, less than one rookie running back per year on average makes the type of impact you would want out of a top 10 fantasy pick, and more often than not, that impact comes from a surprise player who unexpectedly takes the reins rather than a pedigreed first-rounder. In the same 10-year timeframe, only 17% of first-round running backs have eclipsed the 190 point mark, while the rest have fallen short (in most cases far, far short) due to injuries, ineffectiveness, or both.

This isn’t just about the history of hit-or-miss rookie running backs, it’s also about the fact that Zeke (can I call you Zeke? I feel like we’re on that level) shares a backfield with one of the deepest positions in Dallas. Morris was brought in this offseason – what do you mean you don’t know who that is, I literally just told you to remember that name a paragraph ago – and he’s still just 27 years old with three 1,000+ yard seasons in his four years in the league. Also in the backfield is McFadden, a former first-round disappointment himself who turned in one of the best seasons of his career last year in Dallas. I know ESPN’s Todd Archer reported the team has no plans to ease Zeke’s workload out of the gate, but surely the franchise took note of what happened to DeMarco Murray the season after they ran him into the ground and let the Eagles throw $42 million at the remains. Maybe I’m giving the regime a little bit too much credit, this being the group that saw it fitting to sign Greg Hardy a year ago, but I highly doubt they will give Zeke the Murray treatment when there are plenty of other mouths to feed.

So, to recap, rookie running backs are a risky proposition historically, and Zeke has some capable teammates that the franchise would be smart to give some playing time to, even assuming that he immediately runs like an elite back. Don’t forget to factor in the hamstring injury he’s currently fighting through, admittedly minor but eating into his time getting acclimated with the new system, or the domestic violence allegations from an ex-girlfriend that are currently on the backburner of the minds of the Cowboys but have not been resolved yet. These are all risks that are not currently being priced in at such a high draft slot. The first round is not the time or place to try swinging for the fences. Sorry for the baseball analogy, I just finished reading Grey’s daily recap. Anyways, if you miss on a pick that high, your season is already on life support unless you hit every single other pick. You may want chase after the young, fun and sexy guy like a Gronk party cruise attendee, but wouldn’t you rather just have Gronk on your team instead? In standard scoring formats, I’m drafting Zeke behind Hopkins, Gronk, Green and Bryant, and in PPR leagues, I’m sliding him behind Brandon Marshall and Allen Robinson too. Are you dead set on running back? Snag Lamar Miller if you must. You know what all of these guys have in common? They’ve either eclipsed or come damn close to that 190 point threshold in their most recent full season, and there is little reason to doubt they will do it again. If you go with Zeke in the top-10 and he pans out, congratulations on paying fair value for him. If you draft him and he struggles like many rookies before him, don’t come to me in November crying about how he ruined your season unless you have some grapes to feed me.