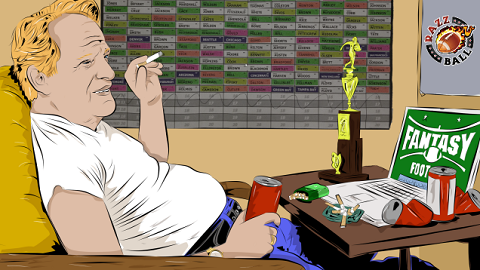 It’s a bird. It’s a plane. It’s malamoney’s fantasy football rankings. The best thing about rankings and projections is that no one ever calls you out for having absolutely sh!tty projections. It’s not until months later when the season is over that projections can really be evaluated for efficiency, and by that time who really give a flying [fill in the blank]. Not to mention, who’s actually going to take the time to do so.

Here is my process for generating projections. Step one. Develop a random number generator. Step two. Generate hundreds of random numbers. Step three. Publish projections. Okay, so that’s not exactly how I get from point A to point B. Truth be told, I wouldn’t be surprised if there were some sources out there that did.

First I calculate my own set of player projections. Next I download between five and ten other sets of projections. Finally I take all of the projections, including my own, and run them through a program I’ve written that averages all of the projections together. I considered dropping the high and the low scores, but that just seemed a little counterintuitive. Besides, it’s not like I’m judging figure skating over here. The biggest pain in the ass is dealing with all the various spellings of the same name. Odell Beckham Jr. versus just Odell Beckham. Steve Smith Sr. versus just Steve Smith. T.Y. Hilton (with the dots) versus Ty Hilton. And how about Le’Veon Bell (with the apostrophe) versus LeVeon Bell. When the dust finally settles and I’ve lined up all the edges, I have my projections.

If you are interested in my positional rankings based on projected points, please take a look at my last post, The Adventure of Bidding. If you are just too damn lazy to click a link, I will summarize…

I’ve moved Tom Brady into the six hole. His projected points are based on 12 games, but his points per game is the fourth best. However, since you are forced to draft another quarterback for the first four weeks, I ranked him after Andrew Luck and Drew Brees.

LeSean McCoy, Matt Forte and Eddie Lacy all interest me this year if I can get them in the right round. These are all players that were first rounders a year ago. Ok, maybe two.

I think owning one of Antonio Brown, Julio Jones, Odell Beckham Jr. or DeAndre Hopkins is a must. But that’s just me.

In order to get Rob Gronkowski you are likely going to have to use your first round pick. I’m just not sure I could do that. If he’s there in the second round I’d likely grab him, but I might try and grab another top RB or WR and wait a round or so for Jordan Reed or Greg Olsen. Ideally I’d like to have one of those three, but since when have you even been able to draft your ideal team?

Ok, now that we have positional rankings, how do I know whether I should take Devonta Freeman or Allen Robinson? How do I compare players across positions?

The first step is get yourself a set of reliable projections. Check! In fantasy football there is only one category that counts. Points. The key to determining position-adjusted rankings is trying to figure out how much more valuable each player is than the replacement level player at his primary position. The replacement level player is the guy that can be typically found on the waiver wire. Or in leagues with a reasonable bench, the replacement player would be the player on your bench that you want rostered, but almost never put in your lineup. You always want to make sure you are starting a player better than this player.

In a 12-team league I figure here’s how many players at each position I believe are ahead of the replacement player.

Based on the above criteria, here are my position-adjusted rankings for PPR leagues.

Here’s quick explanation of some of the columns.
FPTS=fantasy points, FVARz=fantasy value above replacement based on z-score, Rank=My rank, ADP=average draft position, ADPD=difference between ADP and my rank

You’re going to have to take this list with a grain a salt. I think that’s the right phrase. This list is completely numbers driven. There is no intelligence beyond the stats. According to the results, Cam Newton is a first rounder. While that might statistically be true, I can’t see myself taking him over Adrian Peterson. It’s just not logical. However, these rankings should help give you an idea of where all the pieces fit in a “perfect” world.

I’d like to discuss the last column “ADPD” in the table above. This value represents the difference between where I have a player ranked and his current average draft position. This is where we can find bargains on draft. It will also help us pinpoint players that are being drafted too early. You should likely avoid most of these players.

Let’s see what bargains we can find.

Tom Brady has an ADP of 74.4, but I have him ranked 19. He’s clearly not a second rounder. So here’s how I’d approach this. Pick 74 is the sixth round in a 12-team league. If Brady is your guy, then I’d draft him in the fifth round and know you got a bargain.

Greg Olsen is currently being selected with the 44th pick. My ranks put him at 21. Take him in the 30’s and be happy.

By now you should see where I’m going with this. If not, just make sure you are aware of every players’ average draft position. This will keep you from drafting a guy in the fourth round when you can wait until the eighth. As for ADP data, do not use your sites built in rankings. Those values are hot garbage. Your best source is the results of the thousands of completed online drafts. This is where I get my data.

I have attached my full set of projections at the bottom of this post. In addition to all of the projections, there is a worksheet labeled “Draft” which ranks all of the players and includes ADP details for both standard and PPR formats. The first column (drafted) can be used to check off drafted players. Entering a “1” (no quotes) will highlight that row green for a player you have drafted on your team. If you enter any other value, the row will turn red, indicating a player that is no longer available.

By the way, the answer to Freeman versus Robinson is (you tell me in the comments section). Any why.