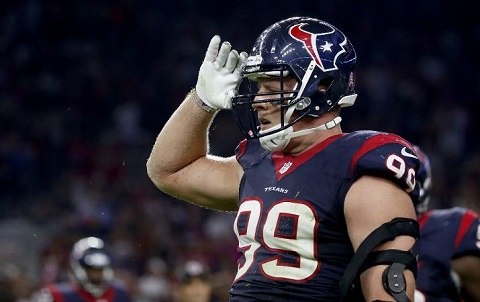 J.J. Watt has more fantasy points than LeSean McCoy. I just thought I would share that with you fine folks out there. With that being said, I also want to establish that we witnessed the first competitive Thursday Night Football game of the season… in Week 6. And it certainly did not look like that at first. The first quarter was actually written by Franz Kafka. The Colts built a 24-0 lead, and the Texans had run more plays than yards gained. And as the game started getting away from us all, like a small child being held by Adrian Peterson. Or like the freedom once held by Adrian Peterson. Adrian Peterson is an a**hat is what I’m trying to say. What I’m also trying to say is holy f*cking sh*t T.Y Hilton. And despite the Colts going Ivan Drago on the Texans early in the game, they amazingly gritted their way back with an insane display of footballing by J.J. Watt (good lord, I should have drafted Watt as an offensive player), Arian Foster staying injury free, and Andre Johnson actually proving that, in fact, he is alive and well. Yes, it was all in an effort so that Fitzmagic could lose by a closer margin than expected (oh Houston), but seeing as how we have to watch the Patriots win by at least 30 points next Thursday, this competitive game (mostly) was a wonderful reprieve.

Ahmad Bradshaw – 11 CAR, 34 YDS and 3 REC, 25 YDS, 1 TD. Maybe one of these days, the Colts should actually HAND it to Bradshaw instead of just faking it.

Ryan Fitzpatrick – 15/23, 212 YDS, 1 TD and 1 CAR, 5 YDS, 1 FUM. I can’t quite figure out if Fitzpatrick looks more like a Scottish Terrier in a uniform or a Civil War General stuffed in an NFL uniform. Just remember everyone, with proper breeding, your family’s connections, and a lot of old money, you too can become a mediocre quarterback for Houston.

Arian Foster – 20 CAR. 109 YDS, 2 TD and 3 REC, 32 YDS. An impressive display, no doubt. But I have to give credit to the Colts defense. They left holes big enough for an average Houston fourth grader to get through. (I’m assuming they’re fat. People are fat in Texas, right? Everything is bigger in Texas, isn’t that the saying? All I know is that I’ve driven through Texas and the bugs there are bigger than my thigh. Since then, I eat my tortilla’s and BBQ in moderation.)