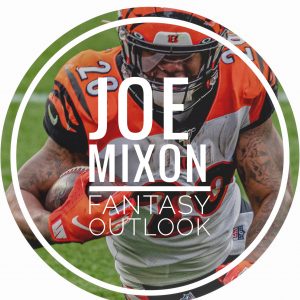 Let’s get right to the point: you’re here because you don’t know what to make about Joe Mixon, running back for the Cincinnati Bengals. I don’t know what to make of him, either, to be honest. People smarter than me have him ranked as the 6th player off the board in 2020 Fantasy Football. However, he’s a running back with the [checks notes, does double take, spills papers] second worst offensive line in the NFL. Over at the NFFC, Mixon is the first round player that expert drafters just completely disagree on–he’s gone as high as 4th, as low as 20th, and holds an average of the 9th player off the board. So, let’s take a closer look at Joe Mixon, who is probably your first round target if you’re drafting in the bottom half of the first round.

Drafted from Oklahoma in the second round of the 2017 draft, Joe Mixon became the primary running back for the Cincinnati Bengals during a series of losing seasons. Originally drafted under Marvin Lewis’ regime, Mixon came in and took the starting job from Giovanni Bernard by 2018. Even in 2020, Mixon continues to earn half as much as his backup. From the perspective of ownership, Mixon has clearly outperformed the value of his contract. In 2019, the Bengals hired Zac Taylor, a young assistant coach with almost no higher-level coaching experience. Taylor led the Bengals to a 2-14 record, with team offensive ranks in the bottom 10% of the league. In the 2020 draft, the Bengals picked Joe Burrow as their quarterback of the future, and he’s expected to start on Week 1.

Rudy Gamble has Joe Mixon ranked as his #6RB, and Donkey Teeth has Mixon ranked as his #14 RB for 2020. They share the same projection for Mixon’s rushing yards–about 1,050 yards on the ground–but differ greatly on Mixon’s receiving opportunities. Rudy has Mixon taking 75 targets and over 50 receptions, while Donkey Teeth sees Mixon snagging about 35 catches in 2020. This difference in projections likely stems from Rudy seeing the return of a healthy A.J. Green, who would pair with Tyler Boyd to provide two legitimate downfield receivers. Rudy projects Mixon to be the third most targeted receiver on the Bengals, largely due to a lack of proven depth among wide receivers and tight ends. Although research has shown that rookie QBs–like new Bengals signal-caller Joe Burrow–don’t rely on running backs any more than veteran QBs, Mixon’s status as a playmaker could attract Burrow’s attention early in the season. The word “could” is doing a lot of work there, though. In desperate times last year, Mixon attracted only 45 targets with an average depth of target of [double checks] negative zero point three yards.

Mixon’s appeal as a first rounder stems from his ability to make his own plays. Now, this is the same situation that Chicago Bears’ running back David Montgomery inhabits: an awful offensive line, a questionable quarterback, and a great ability to break tackles and make his own yards. So, if you liked that article, much of the following will sound familiar.

In 2019, Mixon was on the field for nearly 20% more snaps than his wealthier backup, Giovanni Bernard. This led to Mixon taking the 5th most carries in the league and garnering the 8th most rushing yards. The Bengals’ dismal offensive line–bottom five in the in the league in every category–allowed defensive lines to absolutely jailbreak past them and hit Mixon hard. But, Mixon dodged and weaved to lead the league in evaded tackles, and ended up second in the league in yards created. Mixon was hit, on average, at 1.8 yards beyond the line of scrimmage, and the remaining yards–60% of his season total–were his own work. This elusiveness applied to receiving as well: despite that -0.3 average depth of target, Mixon got his legs working for 9.5 yards after catch per reception, the third best in the league behind Dalvin Cook and Austin Ekeler. Because Bengals’ WR3 John Ross has a 50% catch rate and significantly trails Mixon in career receptions since their shared debut in 2017, you might see the justification for Burrow throwing to Mixon often.

In short, Mixon combines volume with upside, which is what brings experts to tag him with first round value. However, that upside is affected by the rookie quarterback and the dismal offensive line. In 2020, the Bengals will have 2019-first-rounder Jonah Williams join the line after recovering from injury, which should bring a marginal upgrade in performance. Should Burrow take a liking to Mixon, it’s entirely possible that Mixon pulls a 2019-Leonard Fournette-style sudden and massive increase in targets. With Mixon’s elusiveness in the receiving game, that would justify first round value. If Mixon merely repeats his 2019 numbers–which his peripherals suggest is likely–he’ll be a top-10 RB in standard fantasy leagues.

I own Mixon in SFBX and the Fantasy in Frames Charity League this year. Given his upside and the scarcity of top RB, I’ll continue drafting him toward the end of the first round. That said, I’m taking Derrick Henry more often in best ball leagues.

If you have a hot take on Mixon, drop it in the comments below, or check up with me on Twitter @EverywhereBlair. Cheers all and happy drafting!