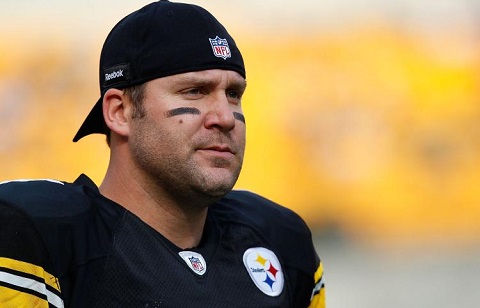 After this week in the NFL, I feel like I might need to shed my old-school thinking that a quarterback is not worthy of a first-round draft pick in my fantasy football league. I always refuse to spend my first two picks on anything besides a running back or wide receiver (yes, I have never drafted Peyton.), but I always feel like I get a decent QB (usually Cam Newton and, you know, Cam Newton…) This week, I might adjust my mindset, especially after Newton’s week. Next year, you will see me spending my first round pick for Andrew Luck over LeSean McCoy every single time.

Quarterbacks who were the Reason You Won (heck, they probably carried your whole team, that you didn’t even notice your defense scored negative points, a la the Bears, the Colts, or Eagles):

Ben Roethlisberger – He is back!!! He only broke over 20 points in traditional scoring leagues once this year (versus Tampa), but Sunday afternoon he ranked up over 40 points against the Colts. He threw for over 500 yards and 6 touchdowns… I really hope you started him if you could, but if not, I feel like there is no reason not to start him moving forward. He is owned in 80 percent of ESPN leagues, but I feel like that will change this week. Big Ben proved Peyton is not the only QB to win your fantasy match-up.

Tom Brady – He too has reemerged after a lackluster first few weeks. Brady scored over 30 points this week; second time this year he threw for over 350 yards. This week versus the Bears, he threw for 5 touchdowns, helping Gronkowski score three TDs and receive almost 150 yards and rack up around 32 points in non-PPR leagues (the most points fantasy points for TE this year). Tom Brady owners are quite relieved and glad patience paid off for them.

Andrew Luck, Peyton Manning, and Aaron Rodgers – The top three QBs respectively in the league. Week after week, they continue to score in the 20s for fantasy points if not more. Andrew Luck might have lost to record-breaking Big Ben, but he still threw for 400 yards and 3 TDs. He is the most dependable fantasy starter out there. Rodgers also lost his game to the Saints, but he still helped fantasy owners throwing over 400 yards and racking up around 24 points. These three men make your fantasy team and might just prove a QB is the most important asset.

QBs you should add if you are desperate: Kyle Orton. Yes, I know Bills just had a monster game. But Kyle Orton is still proving to be consistent throwing for over 200 yards every game he has started. Hopefully, his interceptions will decrease, but his stats are better than a lot of starting QBs (like my Cam.) Orton is owned in 1.7 percent of ESPN leagues, so if your QB has a bye coming, I would use him as a fill.

Now on to the Quarterbacks who were the Reason You Lost:

Cam Newton – Major bummer… I love Cam (in case you cannot tell from my profile picture), but he is just so dang inconsistent.  I know it’s not entirely his fault, the defense, OL, blah, blah. But for a QB to score a measly 4 points is pathetic. I get more from my kicker than that. Thankfully, I did sit Cam this week because of the Seahawks D, but moving forward, Cam is staying on my bench, because he is purely too much of a gamble for me right now. Rivers is my starter, and every time I start him I win. I think there is a correlation, because I am 6-2.

Joe Flacco – Another inconsistent QB that belongs on the bench. One week, he has 7 points, then 32, then 14, and now 4. Unless, you have a super good feeling about him one (which I rarely do), he is just a bye-week filler. Russell Wilson is also playing a similar game with Flacco where his points are all over the place, but I have more faith in him.

WTF Moment of the Week:

I think the first crazy thing that happened this week was when football started at 9:30 in the morning. I am pretty sure most people had to set an alarm for that. But the WTF moment of the game happened in the last 4 seconds when Matt Prater missed his field goal but got a second chance when Detroit had a delay of game penalty. Prater did not miss twice, and pulled off a field goal that had an extra five yards because of the penalty. This second kick sealed the Lions victory by one point. The Lions own penalty won them the game.

Next Week, Broncos versus Patriots looks to be the toughest match-up. I predict both QBs throw for 3 TDs and over 300 yards, but Broncos end up on top (age always comes before beauty). Colts redeem themselves on Monday Night Football versus the Giants. Luck easily gets 30 fantasy points and helps T.Y. Hilton owners have one of the best wide receivers of the week. Jets chose Michael Vick in their battle of crappy QBs, so the Chiefs stomp over them.

Do we agree or disagree that a QB makes or breaks your team? ​