Here is my breakdown of the Packers @ Bears.  You can check here for my Jets @ Steelers breakdown.  I am very excited for both of these games.  Today is better than the Super Bowl.  Two games, four teams, all scratching and clawing their way to the Super Bowl.  All four have a very real shot at getting there.  Amazing.  Now all they have to do is to beat their guy.

The Bears and Packers haven’t met in the playoffs since just after Pearl Harbor.  But they have met since at least two or three times.  After watching Mr. Rodgers eviscerate his playoff opponents I was pretty much set on picking the Packers to beat any team they played, but the Bears aren’t just any team when it comes to the Packers.  They have a history.  But really most of that history is long gone, even that first Monday night game they played this season was a coon’s age ago.  But the last game they played was in week 17 and was pretty enlightening.  The Bears went into Lambeau with no reason to play their starters for the whole game, but they did and they played them close in a must win game for the Pack.  It was a defensive battle for the most part as you can see below. 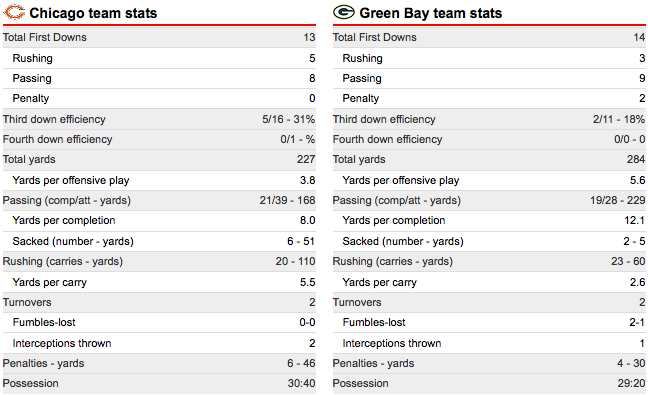 The Packers had a better passing game while the Bears had a better running game.  Both teams had 2 costly turnovers, but Cutler’s game ending interception was the biggest.  The game wasn’t pretty, but the Bears defense showed they could slow down one of the best QBs in the game.

Quarterbacks: Aaron Rodgers has been on an absolute tear. Last week he was 31-for-36 for 366-yards and three touchdowns.  That is about as good a game as you can possibly have.  Of course that was in a dome and not against a division rival.  The guys at Fanhouse took a look at big playoff games by QBs and their follow up games and the numbers aren’t exactly great. In the last ten years 13 QBs have had a 130+ QB rating in a playoff and of course they are 13-0 in those games.  In their follow up games they went 3-9. That doesn’t mean all that much, but it is hard to be perfect over and over and over.  I should know!

The Bears defense is strong all around, but Rodgers can throw on any team with Jennings, Driver, Jones and Nelson all in the game at the same time.  The weather at Soldier Field will be in the teens, but the wind will be negligible, which should allow Rodgers to throw fairly easily. The Bears pass defense is ranked 20th which ain’t all that good, but that is based on total passing yards, which isn’t always that telling. Being a fantasy dork I like to look at fantasy points given up to QBs and the Bears have given up 14 points a game compared to the Packers 13 points a game.  It won’t be a cake walk for Rodgers which he already knows from their last matchup.  It’s hard to see Rodgers getting shut down though.  He’s too on point right now.

Jay Cutler had a great game last week, but it was against the Seahawks. In 4 games vs. Green Bay, Cutler has a QB rating of 57.5 and 4 TDs to 9 interceptions.  That isn’t great.  Cutler has the ability to play well against any team, but the Packers are a great pass defense which starts with Clay Matthews rushing the quarterback.  Cutler was sacked 6 times the last time they met.  He’s taken a lot of sacks this season and those 6 against the Pack are disconcerting.  They must, absolutely must, run the ball to keep Cutler from face plantation.

Running Backs: James Starks, John Kuhn and Brandon Jackson make up the rushing attack for the Pack, but the Bears should be able to keep them in check. Last time they held them to 2.6 yards a carry on 23 attempts.  I see that happening again, but the Packers don’t need to run successfully to win the game, but the Bears do.

Matt Forte has really come on in the second half of the season and is a big reason the O-line has been congratulated for getting better.  They may not be much better, but they also aren’t getting pass rushed on every down.  The one semi-weakness the Packers have is in the run game.  They give up a hefty 4.7 yards a carry and 115 yards a game.  And last time, even in a defensive battle, Forte had 151 total yards.  He only had 15 carries for 91 yards though and I believe he needs 20+ carries in today’s game for the Bears to have a chance.  Oh, and those attempts need to be productive like last time when he averaged 6 yards a carry.

Wide Receivers: The Packers are stacked at wide receiver. Greg Jennings is elite.  If he touches the ball he will get you a good chunk of yardage.  Donald Driver is the chain mover and security blanket. James Jones is the wild card big play maker; Jennings’ little brother. And Jordy Nelson is the handyman that will be there when you need him. Of course they are made even better by Rodgers.  It seems that every Packers wide receiver is in perfect synch with what Rodgers is thinking.  And with Rodgers’ escapability, that makes for a deadly attack.  Who will score out of the receivers is very tough to tell, which makes them even more dangerous.  You have to keep Jennings from making the huge play, but Rodgers will then just find his underneath receivers all day until Jones or Jennings slip past the defense.  Jennings is the fantasy guy you have to bet on, but I believe that any of the 4 have a great shot at scoring.

The Bears receivers are good. Well, Johnny Knox is good and could be great and Earl Bennett is pretty good and Devin Hester is ok.  I think as a group they are above average, but they are going up against Tramon and Woodson and a great all around secondary.  If you look at the week 17 box score it looks like Knox didn’t even suit up, but he had 8 targets, catching none of them. Tramon Williams beat him pretty well and he also slipped a few times and dropped a couple passes.  I have a feeling he’ll have a better game today.  It would be pretty hard for him not too.  Rashied Davis had 7 receptions in that game, but that’s not who you want getting the targets for the most part.  I’d rather have Earl Bennett finding the holes in the secondary.  He has surer hands.  Devin Hester needs to save his strength for returning.

Tight Ends: Donald Lee had the game winning touchdown in their last meeting, but that was his only catch. Andrew Quarless is the better bet for receptions, but I’d stay away from both in fantasy leagues.  They just don’t get enough looks.

Greg Olsen came up big last week and could once again.  The Pack are 26th in fantasy points allowed to tight ends. With Dez Clark back to help with blocking and the Packers only weakness in the passing game being against tight ends, I like Olsen to have another good game.

Let’s take a look at how the individual offensive players fared in week 17. 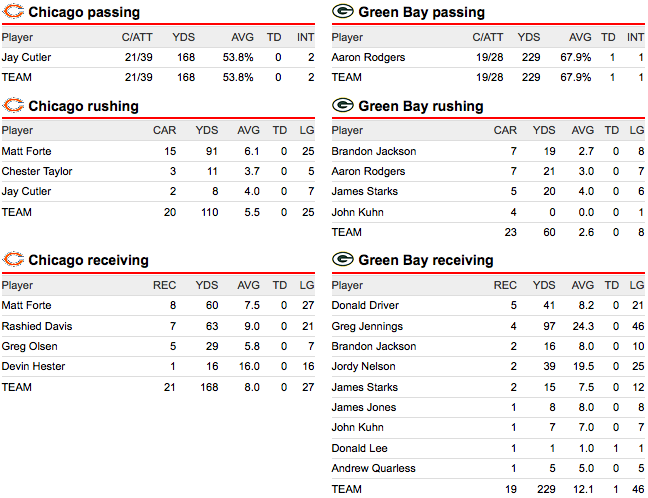 Do you see the discrepancy in players with receptions? That’s a good sign for the Packers.

Special Teams: With the dynamic duo of Hester and Gould it’s hard not to like the Bears in special teams. Football Outsiders has the Bears at #1 and the Packers at #26.  The question is constantly asked if the Pack will kick it to Hester and of course they will try to keep it away from him (which gives the Bears good field position), but Hester will get a shot or two.  It just happens.

Defense: The Bears are better against the run than the Packers. The Packers are better against the pass. The Bears have Julius Peppers and Brian Urlacher, the Packers have Clay Matthews.  Charles Woodson and Tramon Williams edge out Peanut Tillman and Chris Harris, but the Bears are no slouches. Both defenses are formidable with many of the lesser known guys playing at should be better known levels.  It’s hard to give an overall edge to either.

If I could rely on Martz giving Forte his 20+ rushing attempts I would feel better about the Bears. Home field helps them, but the lack of wind helps Rodgers and the Pack passing attack. I picked the Steelers in the AFC and I feel just slightly better about that guess than the one I’m about to give.  These two rivals know each other very well and I think can attack each others strengths.  Jay Cutler’s knack for sailing a few passes and locking on a receiver even though he is surrounded by 13 defenders is a problem and Aaron Rodgers knack for just being friggin awesome makes me lean toward the Packers in this game. I’m not putting my own lazily earned money on it though! It should be a good one.