Apologies, everyone. I missed last week’s article because I was busy with a jury duty summons. This wasn’t your typical case, which is exactly what I expected in my quiet Pennsylvania neighborhood. Instead, the case that I was potentially going to be selected for was national news: a quadruple homicide in a barn in southeast PA that is still being investigated now. Needless to say, I wasn’t selected, but it unfortunately kept me busy and kept me from sharing my strategy with all of you loyal readers… which is a shame, because my FanDuel lineups did pretty well this week (ignore the stakes and let me bask in the glory of my success… I’m just out of college, alright?). 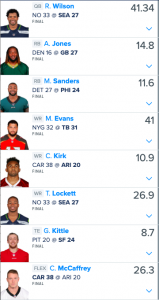 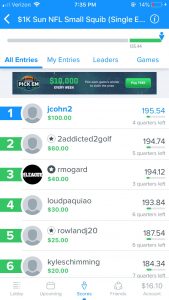 But I’m back now, and I’ve come to release this info (name that tune!) and I’m feeling real confident about about a bunch of picks this week.

Because DraftKings and FanDuel offer different prices for certain players and have a different cash total overall, one option may be better for a certain app than for the other app, and that will be noted. The first price is their DraftKings cost, and the second is the FanDuel cost.

Danny Dimes! What a debut! And what a subsequent matchup against the abysmal Washington Redskins, one of only three teams this year that has allowed at least nine touchdowns through the air. Losing Saquon Barkley obviously hurts the offense as a whole, and perhaps makes Jones’s fantasy prospects a tad bleaker now that the defense can hone in on him. But Jones can run, and we saw his athleticism on display as he scored not one but two rushing touchdowns.

With a pretty reliable receiving corps led by Sterling Shepard and Evan Engram, and the whole entire Giants fan base behind his back, you’ve gotta ride with the hot hand and take Jones. Other quarterbacks at a similar price point, such as Jacoby Brissett and Teddy Bridgewater, do not have as good of a match up nor as high as an upside as the young gun out of Duke.

Another rookie makes the cut. Jacobs had a down week last week, but so did the Raiders as a whole. There very well may be a correlation there. Minnesota’s defense has done a decent job against opposing runners this season (10th/8th least fantasy points allowed to running backs depending on the website), and the game script forced the Raiders to pass and pass and pass some more. Derek Carr threw the ball a good amount, and Jacobs was only given ten carries (which he converted to 44 yards… not too bad).

Enter a match up with the Colts and you have a much less imposing opponent and a game that’s actually winnable. Jon Gruden has been public about wanting to get Jacobs more involved in the passing game, which would only boost his already valuable presence on the field. If this is the week he becomes a legitimate dual-threat running back, you’ll want to get in on the action for this relatively low cost.

The man who I’ve been unofficially labeling as the biggest bust of 2019 has a real chance to remove that stigma against the Bengals this week. Jaylen Samuels has been looming as a potential replacement for Conner in the event of injury or continued ineffectiveness, but the unanimous first-round fantasy pick should be able to prove himself this week. His price has been lowered significantly since the start of the season, when he was going among the top running backs in the league. Though the Steelers’ offense will never be the same without Big Ben, defenses still have to keep Mason Rudolph honest, and Conner should have room to run against a lowly Bengals squad.

Side Note: I’d avoid Wayne Gallman. His cost isn’t high, but you can expect him to be one of the most highly-drafted players in DFS this week, and he just isn’t anywhere near the same as Saquon despite the starting opportunity.

There are a couple of caveats that come with selecting the rookie for your lineup this week. However, they’re both easily identifiable. For one, McLaurin is questionable after injuring his hamstring in practice, so you just have to make sure that he suits up (duh). (Editor’s note: McLaurin is OUT). The other thing you should know is that, proportionally, McLaurin has a much better value on DraftKings than on FanDuel. However, his value on FanDuel is still good for someone who should feast on the Giants offense.

If he doesn’t suit up, then Paul Richardson ($3,700/$4,700) should be a really, really good play, especially on FanDuel. FanDuel has Trey Quinn, another solid Redskins receiver, at $5,400, and so FanDuel expects him to outperform Richardson. DraftKings, meanwhile, has Quinn at the minimum cost ($3,000). TAKE ADVANTAGE OF THIS. In a game where the Redskins are the underdogs in Vegas, the game script could be one that involves a lot of passing and catching up to Danny Dimes and the G-Men’s new look offense.

This one shouldn’t come as much of a surprise, and will also be a popular pick like I mentioned with Gallman. However, this one is much smarter, as the Redskins secondary is reminiscent of Oprah in their willingness to give away big chunks of yardage at a time. You get five fantasy points, and you get five fantasy points! The only team defense that surrendered more through three weeks? The Giants (hint, hint… there’s a reason that McLaurin and Shepard are in for big games). Shepard showed immediate synchronization with Daniel Jones, too, which is a good sign, and this is Shepard’s last week to play without Golden Tate stealing some targets. Take advantage while you can.

With no George Kittle (bye), Zach Ertz (TNF), and Hunter Henry (injury), and a questionable Mark Andrews, Delanie Walker, Greg Olsen and Vance McDonald, the tight end position is especially limited this week. Austin Hooper, however, has been as reliable as they come throughout the first three weeks of the season, and the Titans defense has surrendered three touchdowns of seven yards or less to tight ends this season. Austin Hooper, along with Julio Jones, have been targeted the most out of anyone in red zone opportunities this year, and both of his touchdowns have come from within the 20. It all just seems like some giant puzzle fitting together for Hooper to play well this week.