Welcome to Week 6.  There will be surprises today. Many, many surprises. That is the only thing that will remain consistent from week to week. It can get infuriating. There will be some players that are consistent, at least in comparison to other players, but they are few and far between. As soon as you get past the top 10 or less at each position it often feels like a shot in the dark. We have the stats, the video, the analysis and still we’ll be watching today and be completely baffled. Yes, we’ll get some calls right and some wrong and hopefully we’ll get enough right to win our games, but it often feels like we might as well have a pack of kittens picking players. That’s what makes this game so fun of course, but sometimes it can feel like we are banging our heads against the walls. This is all to say that you have to be willing to cut your losses and stand firm all at the same time. Be stubborn and wishy-washy!

This post is going to be a cornucopia, plethora, deluge, flood, glut, overabundance, overkill,  profusion, superabundance, superfluity, surfeit, and a surplus if you will, of links and analysis.

Clint is working diligently on keeping the Week 6 Fantasy Football Injury Report up to date so go over there and make fun of him for working so hard.

I’ve been trying to tweak our App without causing World War III and this is what I’ve come up with — iPhone and Android.

Denarius Moore: The hype has died off, but the ability is still there. I find it hard to really trust an Oakland receiver fully, but in these trying times of bye weekness I will often throw out the upside play over the safe/bluh play. The good news for Moore is that Joe Haden is out and even though it seems that Darrius Heyward-Bey is the #1 receiver and Haden’s absence would help him, teams have been playing Moore as if he was the #1 receiver. Last week when Moore got 6 targets and no receptions he was being covered by Jon Joseph (Jingleheimeschmidt) which was the main reason for the zero receptions. DHB will get his work as well and it’s hard to predict who will be the fantasy winner this week, but I like Moore’s upside.

If you like to keep track of targets during the games like I do, you should check out the ESPN Scoring Leaders page. You can sort by targets and teams and all kinds of stuff.

The Shutdown Corner Podcast is one of the few I check on and they talk with Greg Cosell who always makes you a little smarter about football when you listen.

Marques Colston: My perception of Colston has change of late. I was worried about his knees for this season and then he goes and breaks his collarbone. He has been the #1 targeted receiver in New Orleans every year he’s been healthy and was fully back on the field last week. Jimmy Graham has been the main guy this season and will get some extra attention. The Buccaneers pass defense has been pretty sad this season. They do get Tanard Jackson back, but I think it will take him a while to get back into game shape. I like Colston.

Bill Simmons gives us his Week 6 picks and tells us what we have learned so far about this season.

Mike Silver asks 32 Questions. There happen to be 32 NFL teams.

Earnest Graham: Yeah you’re probably throwing him in your flex spot anyway. We have an injured LeGarrette Blount and the bye week blues, but I’m liking him a little more than most. He’s not a great running back, but he has shown an ability in space that I didn’t expect from him and hands in the receiving game that I also feel have improved. What I like about this matchup is that he won’t come off the field. The Saints are giving up 5.4 yards per carry and are the 5th worst in receiving yards yielded to running backs. I also don’t trust Josh Freeman with the Saints probably blitzing a lot. They will have to set up a lot of screen passes to combat that. If Graham doesn’t have 5+ receptions I’d be surprised.

Andy Benoit takes a look at the Week 5 film for each game at The 5th Down Blog.

If you haven’t been reading Mike Braude and Asher Molk‘s Matchup Article you should be!

Victor Cruz: I don’t want to like him because I like Manningham so much, but he is making shizz happen and Manning keeps targeting him. Last week Jason Avant had 9 receptions on 10 targets for 139 yards and plays the same position as Cruz. They won’t be able to ignore Hakeem Nicks or even Manningham and without Brandon Jacobs will need to pass even on running downs.

Tim Tebow is exciting and excruciating at the same time according to Pete Prisco.

My Target Watch at Rotoworld and Passing and Rushing Forecast at FanDuel Insider.

Jerome Simpson: I think Cedric Benson and A.J. Green get the bulk of the fantasy points in this one, but the Colts are pretty darn bad in all aspects of defense right now. Last week Steve Breaston had a couple TDs on the other side of Dwayne Bowe and I think Simpson will have some room this week if you are looking for a bye week filler.

I’m thinking we need some kind of hair conduct policy implemented in the NFL. 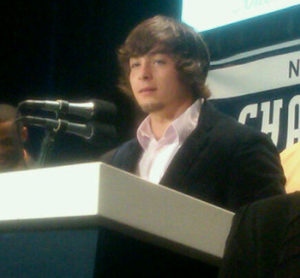