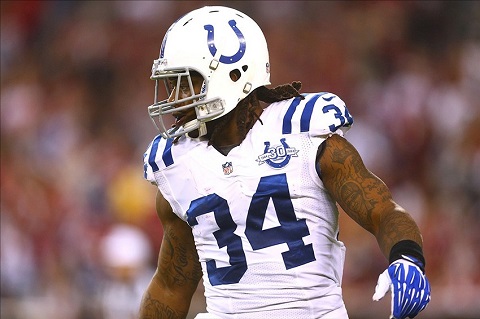 Hunh? What’s that? Run for more than two yards? LOL.

It was reported some months back that Trent Richardson stated his top priority this off-season was was to learn the Colts’s offensive system. Ya think? Regardless, his results from last season were filed under ‘LOL’. Well, probably not for those who owned him. Then it was filed under ‘Florida’. But at this particular moment, it would be hard for me to really nitpick the projections and rankings going into 2013. He *was* supposed to be that good, and everyone thought so. Even our legendary Sky. I’d be remiss, though, not pointing out there’s audio out there of me stating that Richardson was the second coming of Mark Ingram. Nick the Radio Host will certainly back that one up. And trust me, I’m not here to say, “Hey, look at how awesome I am for calling Richardson’s season early on.” Because you already know that. But I bring it up because there are relevant question’s to ask based on that Mark Ingram comp– should we have seen this coming? Had he always been overrated? Is there a buy-low opportunity right now? And what should be the title of his sex tape?

As soon as Trent Richardson was traded, he was supposed to take the Indianapolis offense to the next level. The team still had weaknesses, but getting a primary-back was a large need, and they seemingly filled that need with a young power-back that wasn’t coming off a gaudy rookie season, but a strong first year that showed a lot of promise. Maybe Cleveland knew something that no else did? (Last time they had multiple draft picks, they took Brady Quinn with that extra 1st rounder. So… yeah… there’s that.) There were reports at the time that he was ‘high-maintenance’ and ‘insular’, which doesn’t really give us anything tangible. Anecdotally, just watching him on video last year, there wasn’t any explosiveness, and there certainly wasn’t any elusiveness. He basically did his best impersonation of Ray Rice by running two yards and then falling down. How much was this on the run-blocking? Football Outsiders had IND ranked 15th in that regard, good enough to land in the top-half-middlish-kind of-area. For context, Cleveland ranked 20th in Richardson’s first season. And, for even more context, STL was ranked just slightly ahead in the 12th slot, and that didn’t seem to affect Zac Stacy‘s breakout campaign one bit.

When trying to find out where things went wrong, you kinda have to ask how comfortable you are with advanced football stats. If you are, then there are numbers out there that say his 2012 campaign was actually worse than Shonn Greene and, believe it or not, Mark Ingram. But that’s the thing about football, most of everything, on a basic level, can be seen with a simple eye-test. In that regard, Trent Richardson was terrible this last season. If you try separating the variables to try and pinpoint a specific trouble spot, you’re left with the same answer. So what’s next?

In terms of a buy-low, yeah, that’s fine and all, but even where he’s being drafted right now (Yahoo — RB27, ESPN — RB21), that still feels too high. You could argue he’s underrated this pre-season, but I just don’t buy it. But I guess you knew that because I spoiled it in the title. Sorry! I realize it might be strange seeing a player with Richardson’s price tag still being overrated, but according to my rankings (RB42) and my projections (172 carries, 572 yards, 3 touchdowns and 42 receptions, 286 yards, 1 touchdown), he’s still being drafted way too high. Either that, or he set my cat on fire and this is the only way I can seek revenge. And seeing as how I’ve never had a cat, well, you know what’s up.

Yes, it seems that it would be hard to think he’s this terrible. With a capable offensive line and an above-average QB, it’s hard to imagine things getting much worse. But that’s not really saying much, is it? There are several other backs you can draft in that area, and don’t forget that Ahmad Bradshaw represents a very savvy option in the later rounds. In fact, here’s me quoting me:

“I don’t understand why everyone is so low on Bradshaw. Before he got injured, he was averaging 4.5 yards a carry and already had 7 receptions for 42 yards in just 3 games.”

I just don’t see a franchise back here in Richardson, but I think he can still be a useful cog in a committee approach, and while that’s valuable in the NFL, in fantasy, it puts him on the bench or waiver wire. Come Back Player of the Year? Haha, no, but that is a great title for his sex tape.