Like I did for the rushing defenses, I’ve gone right ahead done for the passing defense and, at least for quarterbacks, I find these stats to be pretty helpful.  They do help for receivers and tight ends as well, but a great receiver has a good chance of grabbing a TD to make their fantasy day, but one TD doesn’t make a quarterback’s fantasy day. So let’s take a look.

If you could trust Vince Young or Matt Cassel they’d be worth an investment, but you really can’t . . . Kyle Orton comes out smelling like a rose in both the overall and playoff grid.  I’m not one to give up much for a QB, but I wouldn’t cry if he was my #1 . . . Michael Vick has had some pretty easy games so far, but it doesn’t stay that way.  Thankfully his legs keep him fantasy relevant . . . Matt Stafford has some great matchups in his first 5 games back . . . Chad Henne has a crazy split between his next 5 and his last 5 games. I’d grab Henne in 5 games. 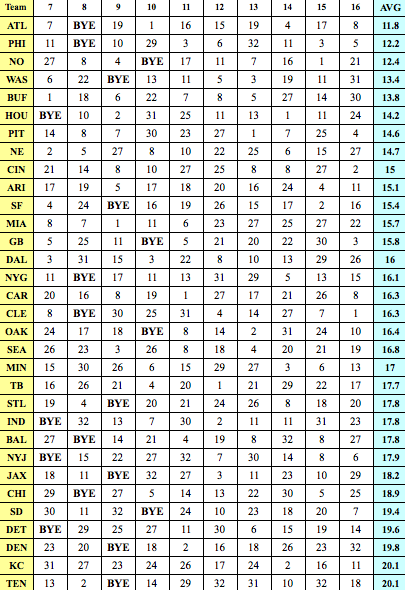 The Fantasy Playoffs, like I mentioned above, are looking good for Kyle Orton.  He has routinely had a bit of a downturn statistically in the second half, but it will be hard for him not to do well this year . . . Tony Romo should have an easy road in weeks 15/16 . . . Peyton Manning has a decent schedule, which for him is an amazing schedule . . .  Joe Flacco has a couple great matchups.