I’ve taken the strategery rankings through week 6 and used them to look at the rest of the fantasy season.  This first graph is the average rush defense ranking of each team’s next 9-10 opponents.  This gives an overall look at how tough the remaining schedule is for running backs.  I tend to look at the extremes because I am like X-games xtreme!  Or because the extremes can show up easier in actual on the field numbers. There are a lot of teams with schedules that are all over the place. So it’s not as if the tough schedules are without nice matchups here and there.

You can see our man JC Superstar has a very nice stretch of games coming up, but then it falls off a bit . . . The rich keep getting richer with CJ2K’s nice schedule . . . Don’t throw Felix Jones on the scrap heap with his future matchups . . . Mendenhall’s team has some tough matchups, but the rush D’s they face aren’t that bad . . . 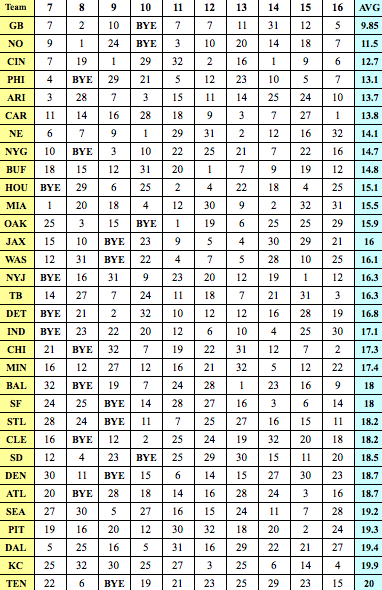 Now let’s take a look at the last 3 games of the fantasy season, or as I lovingly call them, the playoffs. I find this to be really helpful to those of you who are sitting pretty in your leagues.  If you are almost assured a spot in the playoffs! PLAYOFFS!? then look to target some of these guys.  Like our man Knowshon Moreno. Yes his injuries are a concern, but if he’s healthy come playoff time you have great matchups . . . Maurice-Jones Drew is hurting some teams right now, but if you can get in the playoffs, yowzah! . . . Ronnie Brown has a tough week 14, but if you can get to week 15/16, watchout! . . . Cedric Benson doesn’t look poised to help you too much in the playoffs, hope for a few nice games coming up and see what you can get . . . Like I mentioned up top JC Superstar has some great games coming up, but then his playoff matchups are tough . . .