In Pay The Fan you get to start a quarterback twice out of their 16 games, and you only need one QB per week, so you need to select those QBs very carefully! You have to start planning your season out early and then adjust as the season goes on. So here is a schedule grid all color coded and geeked into a realm of geekdom I find myself crossing over way too often. Click on it to make it bigger (that’s what she said). 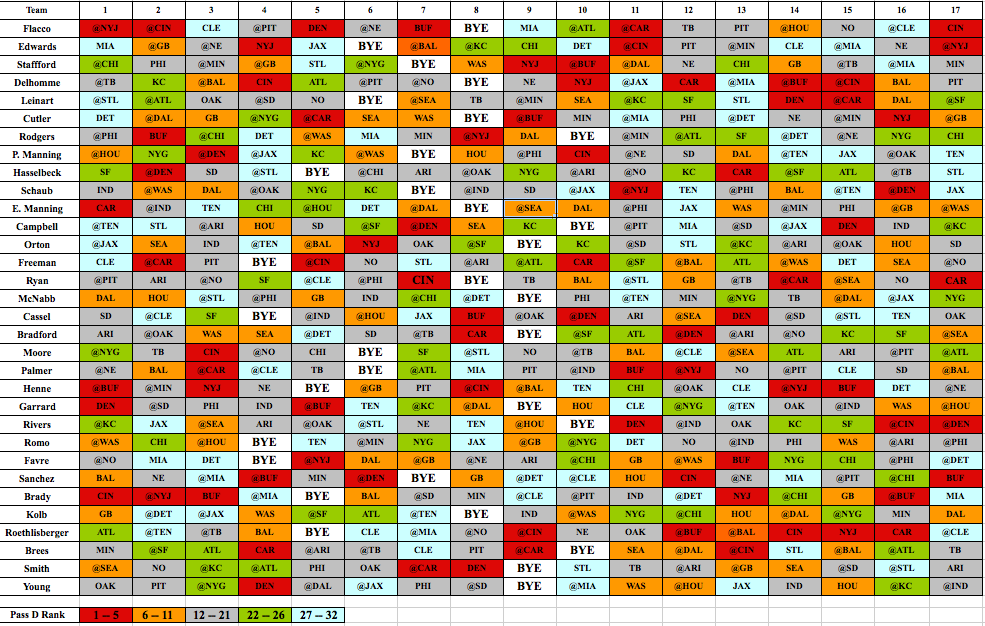 I used this grid to take a look at my top fantasy quarterbacks and find some of their most favorable matchups throughout the season. I try to lean toward home games, dome games and warm weather games and also stay away from week 16 and 17 for teams I think have at least a chance to wrap things up early. This WILL change. It will probably change before the first regular season game, but it will probably drastically change midway through the season. Pass defenses become injury riddled, young secondaries lather up in gel, Qubes have bones Joe Theismanized, and so on and on. But Pay The Fan is set up so you have to continuously look into the future so you don’t end up screwing yourself in the present.

So far we only have 10 players, including myself, in our Razzball Pay The Fan League. Those are pretty good odds for our $100 league prize and of course you have a shot at the overall weekly prize and the overall overall prize (which isn’t a pair of overalls).

Here are the quarterbacks. I bolded the matchups that looked promising. It’s kind of like a cool game of Sudoku if I knew what that was. How do you think your 17 weeks would look? Remember, you can only start one QB per week and you can only use a QB twice: