‘Playoffs? Playoffs!?’ Quick…what comes to your mind when you read that? Add in a little high-pitched squeally voice of an old man and of course you come up with the image of Jim Mora Sr. standing at the podium in Colts garb responding like Iverson to a reporter’s question. He was actually Iverson before Iverson. You know what I’m talking about… 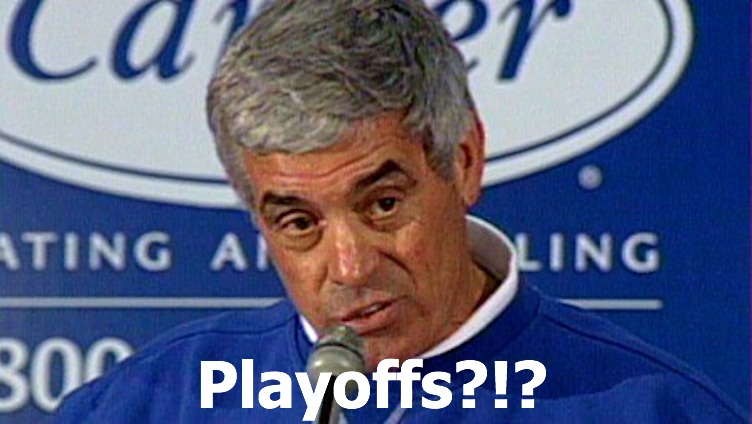 But there may not be a better moniker for the DFS fan of fantasy football in Week 14 than the word ‘playoffs’ with a few question marks after it. While most of the fantasy football community is 6 days into their winter-long bender realizing that their fantasy football season has finally come to a close, around half of the season-long players just stepped into the DFS world.  Are you one of those face deep into December’s Week 14 depression? Missed on your league’s playoffs? Every week of the daily game is like the playoffs.

One week. One lineup. Win or go home…or lose your cash. And errbody can play!

So, if it didn’t work out very well for you over the past trimester, learn from your mistakes and do better. Wisdom is being able to look at the past to know what’s going to happen in the future before it does. In other words, wanna do well in Week 14? Take a look at the trends in fantasy football over the past few weeks to help determine this week’s outcome.

What trend are you seeing in the DFS game leading up to Week 14? Drop a comment below!

Each week we offer a 22-man Razzball-only FanDuel Contest that pays out the top-5 finishers. Think you’re good enough to operate beyond just luck and work your way to the prize? Then put your money where your fingertips are and enter the $5 Contest for Week 14!

And now what you’ve all been waiting for, or just scrolled down and have no idea what I just talked about, here’s how to navigate a medium-sized contest in FanDuel, like our 22-man option…

Tyrod Taylor, BUF – $7,500: There really are quite a few options this week that I love at the QB spot. It might simply be a result of the magnanimous scoring found in Week 13, but you could go any number of ways here and find solid results. The wisdom inside that truth, though, is that you don’t need to spend big this week, and you can stray from the popular, obvious decisions. Let others take Russell Wilson or Jameis Winston against the Saints atrocious D, go against the grain a little, and take a guy that’s right on par with the top QBs in the game the past two weeks. Posting more than 55 points in Weeks 12 and 13 combined is a great trend for Taylor. Seeing the susceptible Eagles secondary should allow him to approach elite numbers again and attempt to make it three straight weeks of 3 passing scores.

Shaun Draughn, SF – $6,500: The name does’t hold much value, but the probably floor of production does. Over the past four weeks San Francisco’s new starting RB posted scores of 11.6, 11.7, 11.1, and 17.1, respectively. He’s getting right at 15 carries per game while adding 35-50 yards through the air, too. Throw in his first TD last week, and the poop Browns 27th ranked rush defense, and you’re looking at one of the best values in all of DFS for Week 14; seemingly a lock for double-digit points.

Charcandrick West, KC – $5,800: I’m taking a risk here, which may not be normal for a 22-man contest, and saving some cash with the West selection. Coming off an injury in Week 12 that allowed teammate Spencer Ware to emerge as a goal line option for the Chiefs, it was still West that received the bulk of carrie between the 20’s. I see Ware’s red zone touches as circumstantial to Week 13 and West’s limited practice more than a new norm. You’re getting a guy who could mirror his Week 9-11 numbers, 23.3 average, while being priced outside the top 25 at the position, and I don’t foresee the Chargers (29th vs. RB) limiting him much. Save that green to lock up these next guys…

Odell Beckham, Jr., NYG – $9,300: I’m really looking to take advantage of the trends leading up to Week 14 with my WR, starting with OBJ. He’s topped 100 yards in five straight, scoring five TDs in that span. The Dolphins rank 24th against fantasy WR, and shouldn’t pose a problem for Odell making that streak, and TD total, push to six.

Brandon Marshall, NYJ – $8,200: A TD in five straight contests and 131 yards in each of the past two with 21 total receptions…this is how you spell hot trend. Ryan Fitzpatrick shaving his beard isn’t propelling the Jets passing game forward, it’s the continued dominance of Marshall. He just became the first player in NFL history with 1000 yard seasons for 4 separate teams last week, and I’m looking for a lot more of those with a few TDs this Sunday against the Titans, a team that’s given up 7 TDs to WR the past two weeks. Yikes.

Allen Robinson, JAX – $8,500: Filling out the WR when you’re saving a lot of coin for them can feel like cheating. Seriously, you shouldn’t be able to roster a team with the three guys we’re going after this week, but such is the strategy. Now I just gotta make sure I get the right ones. The top 7-8 guys could all explode in Week 14, but I’ll round out my three with Robinson. Facing the Colts defense (30th vs. WR) that gave up 4 TDs to the Steelers WR last week, he could have a strong encore to his career day in Week 13 (10/153/3). Talk about trend…no WR is hotter than Robinson right now.

Coby Fleener, IND – $4,900: Here we go with a wildcard! The TE position is a clusterf*&# of 15 guys that can all bring in a handful of catches with mediocre yards. Every once in a while you catch an anomaly (Richard Rodgers last week), but the best way to separate yourself in this group is to find some touchdowns. No team has given up more yards to TE over the last four weeks (107.75 per game) than the Jags, and they surrounded two scores in three of those. Here’s to the trend!

Matt Prater, DET – $4,500: It’s the weekly ‘Who cares?!?’ segment! Prater comes into the game vs. the Rams scoring double-digit points in three straight. Since the Lions offense turned things around a month ago, Prater been one of the better Kicker options, and he’s still priced as low as it gets.

Chiefs – $4,800: The Seahawks defense is the one you really want against the Ravens, but I won’t have the money to pony up for them given this lineup strategy, so I’ll ‘settle’ for the Chiefs. It’s not really fair to say I’m settling for a defense that’s averaging 17.4 ppg over the past five. Haha, bring it on San Diego and Philip Rivers with no outside weapons!

Proverbs 4:7 says, ‘The beginning of wisdom is this: get wisdom.’ So, whether this is your opportunity to get it anew after missing the playoffs in 2015, or you’re just gonna keep on trucking  with the trends you’ve been utilizing, Week 14 means fantasy football playoffs, and with this lineup in DFS you can make some cash to play another week.

Playoffs? No Jimmy Jim Jimbo…just another week. Here’s the Week 14!