It’s 7AM Tuesday morning. Blair wakes up. Pours the coffee, adds the half and half. Toast with butter and jam. Three kids shouting about Cinnamon Toast Crunch fill the background. His wife returns home from a shift in the ER. More drunken ATV crashes. The smoke from the west coast fires has arrived in the midwest, the morning sun shining red through the haze.

“It’s time to check the Razzbowl standings!” Blair shouts to his family audience, nobody caring in particular. Phone in one hand, coffee in the other, he opens the NFC app on his phone, looking at the league summary. “First place!” he exclaims. But wait. Razzbowl Satellite Rank: 1. He scrolls up. The Razzbowl Online Rank: 234. A tear forms. “Covid patients for covid reasons last night,” his wife says. Another tear forms.

Looking for solace, he checks his neighbors in the standings. Ah! Yes, there are some powerful names around me. People from Rotoviz, Rotoballer, people who have big publications. People who are leaders in the industry. Blair thinks back to last year, when he drafted Andrew Luck and then Zay Jones in the 8th round. He was in 6th place in a competitive league at one point! Before, well, falling to 11th place and feeling the sting of defeat.

Blair scrolls to his roster, eyeing Leonard Fournette. “You can do it, Lenny!” he whispers, hardly noticing the two kids hammering cereal spoons at his shins.

With the start of the NFL season, the Razzbowl is underway. If you’re new here, the Razzbowl is one of the largest “Pros vs Joes” best ball fantasy football contests, held over at the National Fantasy Championships. Who am I? Why, I’m only the guy who wrote the guidebook on how to best play the Razzbowl, before winding up in 234th place this week. Am I worried? Naw. It’s all about fun. Besides, there’s a lot of big name players who are down in the abyss with me. The great part about Week 1 victory laps are the small levels of point differentials: If I had scored only 15 more points — about what Jared Cook scored in week 1 — I would be ranked in the 190s. If I had scored about 30 more points — about what Nyheim Hines scored in week 1 — I would be in the 140s. So, abyss dwellers, fear not. One fluke game from the guy who used to be the Colts’ third RB on the depth chart could raise you 100 spots in the rankings right now.

[Pause for the hate on calling Nyheim Hines’ game a fluke]

It wouldn’t be an EverywhereBlair article without some nice, crunchy stats, right?

The average RazzBowl team scored 159.6 points in Week 1. The top 11 teams scored, on average, 216 points. The bottom 11 teams scored, on average, 112 points. Yeesh. Victory laps are great, but like I mentioned above, a lot of teams are one Malcolm Brown or Nyheim Hines or Mitchell Trubisky wonky game away from the lead. I’ll start ranking individual teams as we get a bit further into the competition. Sure, dance in the streets if you drafted these guys, but I’ve been hanging around the water cooler with my hearing aid turned up high, and ain’t nobody planned their 0RB team around Davante Adams, Calvin Ridley, Nyheim Hines, Malcolm Brown, and Matt Ryan. Oh, wait. Actually, league-leader Heath Cummings did just that. Congrats, Heath! Way to draft backup running backs for fantasy glory! But for serial, it worked in week 1, and Heath has a great running start against some stiff competition. 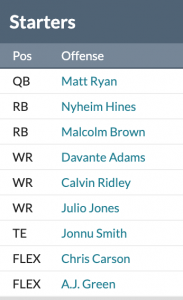 Here are the top ten NFL players in Week 1 of the Razzbowl:

[cough] Yup, Mitchell Trubisky made the top ten. Now, don’t go drafting your Trubiskys before your Mahomes quite yet. Earlier this week in my Top 30 QBs post, I indicated how Trubisky took advantage of a decimated Lions secondary to lead a 17-point comeback. Trubisky — in terms of peripheral stats and game tape — looked just like the guy who could barely edge out Nick Foles in a training camp competition. The rest of the players are your usual “chalk” who will spend a lot of time in the top 10 scoring lists this year.

Who was the most fabulous FAAB result? By the end of the second FAAB period this last Wednesday, the Jaguars’ de facto #1 RB James Robinson was added in all Razzbowl main event and qualifier leagues. Two teams spent their entire $10 FAAB on Robinson in the first week, which is about the hottest taek a manager could image at this point. Oddly enough, a few more managers spent their entire FAAB on Robinson’s compadre and current IL-rider Devine Ozigbo. Friends, always read the player updates before bidding! Ozigbo had sat out the final practices before the season opener. Also, I can’t really blame y’all, because a failed waterfall bid on my behalf resulted in my main event team taking — you guessed it! — Devine Ozigbo.

Other FAAB-ulous chart toppers include the new hot tight end (whew!) in Washington, Logan Thomas. Thomas — by virtue of Washington having a dearth of experienced receivers — has stepped in to be possibly the #2 target for Dwayne Haskins behind “F1” Terry McLaurin. Dolphins’ running back Myles Gaskin took second place in FAAB targets in week two, with 17 Razzball main event and qualifier teams picking him up in the hopes that the Dolphins run the ball instead of passing non-stop to Davante Parker, Preston Williams, and Mike Gesicki. Of course, week 1 darling Malcolm Brown also found his way on to most of the remaining Razzball teams, hopefully to find major usage behind a stout Rams’ O-line. As for the most aggressive bid on the least owned player, that award goes to Bryce Love, who received a $10 bid from Stephen Johnson in the main event. Good luck!

It’s Week 1! Small sample sizes abound. Don’t worry too much about your current ranking quite yet. Some big stars were injured in Week 1, and others simply couldn’t get going. For right now, just keep cheering on your community, and best of luck with your Razzbowl and other fantasy teams.