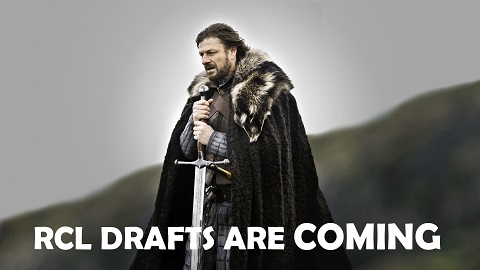 Actually, a few have already happened (and we’ll talk about them a bit after the jump), but, just like the title alludes to, the table is set, the forks and spoons are in their right place, and hopefully there’s food ready and on the way. In terms of the RCL universe (since I’m hungry and if there are any more food metaphors, I’ll eventually end up eating my monitor), the “league” has taken shape and drafts are about to begin. (But that doesn’t mean you still can’t create and join your choice of RCLs!) And, I want to touch on this: when I say “league”, I mean league, not leagues. Because ef pluralization… I mean, what has it ever done for me? Regardless, you have to remember, this is one complete universal league. The Milky Way of Fantasy Football if you will, including Antonio Brown, Saturn, and of course, Uranus. Don’t roll your eyes, you knew it was coming. Regardless, what I’m trying to say is, join any league you like, create as many as you want, and be part… of the universe. Mutha. Effing. Deep.

Now, as promised last paragraph (remember the good old days?), there actually have already been some drafts that have taken place (including a league hosted by yours truly, Lord Tehol, and our very own Stan Son!) and we’ll take a look at some of what happened in these three leagues to give everyone a general idea of what a terrible idea it is to draft early. I swear, half my team will be injured by the end of the preseason…

So, the bad news first, I actually couldn’t load any of the draft results from Tehol‘s and Stan‘s League (yeah-hooo-oooo, amiright?), but I’m just going to assume, with all my analytical power, that Tehol drafted Russell Wilson first overall. I think that’s a pretty safe bet. That being said, I do have the draft results from my first league, Take on the Jay #1 (NUMERO UNO, F*CK SI, as they say in Spanish), and there things to be gleaned from the first ever RCL draft of 2016…

So, I think we have to start with the most awkward pick of Round 1, and that’s Cam Newton going sixth overall. Here’s the thing, yes, I have him ranked first in my Quarterback rankings, yes, I’m a fan, and yes, he has zero fashion sense, but sixth overall? That’s a Cotton meme if there ever was one. Let’s see if I can clean the dust off that one…

Ah, nothing but the classics.

I also think Ezekiel Elliott went a bit high, but I’ll be honest… I understand the hype and it’s hard for me to criticize such things after back-to-back years trying to convince the readership that Ryan Mathews (2014) and Melvin Gordon (2015) were going to cure cancer with their potential production and fantasy value. I was… a bit off on that. That being said, I label this pick a risk. And I know he’s getting older, but Adrian Peterson still seems like a value pick at the end of the first round.

I chose Round 5 simply because it seemed to be the phase when people really have to start paying attention on what’s out there before making the “oh sh*t I’m running out of time, who do I pick, who do I pick, uh… oh, Mike Wallace! He used to be good, let’s go. *Selects Mike Wallace* (…waits 30 seconds while checking notes…) F*CK!” pick. Yeah, you know that pick. And I also like the names here, seems like a lot of value to be had. Matt Forte for one. He’s obviously not a top-5 running back anymore, but he’ll still add tons of points in a half-PPR format like this one, and at this point, what’s the risk? Arian Foster kinda fits the same mold, the reports on him are good thus far, and could be a huge payoff. Even Tyler Lockett has some hype here. And Jonathan Stewart? Yeah, he old and used up, but aren’t we all? AREN’T WE ALL?

Anyhow, join in on the fun, join or create your RCL league today!

Simply examine the Google Sheet below, find a league and draft time that works for you, and click the “LINK” button in “League Link” column to be taken to the leagues home page. If the league is invite only, please email the contact.