Hey, did you know Basketball is a thing? IT IS! And we have RCL’s for that too! Go over there and win some prizes for me. And if not for me, then for you. And if not for you, then back to me. Do it for me.

As the title states, there are only 11 teams left with perfect records now that we’ve reached Week 7 of our Commentator Leagues. And while these teams obviously have skillful owners, you’d have to think a lot of luck is involved here. Andrew Luck that is. With over 400 teams competing, the top-10 (or 2.5 percent) seems like a large mountain to climb, but fear not. There are still 10 games to go. And if there’s anything that football has taught us, it’s be sure to check all female breasts you can during the month of October. For science. Be a hero. Well, that, and also make sure to never watch video tapes, so you can claim something never happened. In addition, don’t be a Rams or Bucs fan. Okay… so football has taught us a lot of things. But the most important lesson is, anything can happen. Even if you started 3-3, 2-4, and even 1-5, there’s always an outside chance to inch your way into the play-offs and make a run at it. Want to make a crazy trade? Why not? Want to stream in Mike Glennon? Whoa whoa bro, let’s not get that crazy… Remember, there’s still a lot at stake here, with several fantastic prizes up for grabs, so follow me after the jump to see how the RCL Universe stands…

I’m not totally convinced that Beats by Ray are actually in first place because I don’t have the video that proves it, but I have already arranged for the rest of the teams in that league to apologize for their part in it. And it seems fitting that Pretty Pink Ponies and Sexual Chocolate are right next to each other, because when I think of pretty pink ponies, Randy Watson and Sexual Chocolate are certainly my very next thought. Because that’s how I roll.

Note: There are still some kinks between our interface and Yahoo’s system. If you notice a team or league missing, please let me know in the comment section below or you can email me at [email protected].

– Some of you might wonder how we assign points to generate the overall standings. Rudy actually uses dark wizardry and algebra to make it happen. But on a numbers level, we use something called “League Index”.

Here’s the science behind it:

If you didn’t faint (like I did when I first read it… and the second and, you know, the third and fourth time), you should know that the “toughest” leagues so far have been Take on SethDaSportsMan (103.4) and the Razzball The Football League (102.5).

As stated above. Beats by Ray leads the RCL Universe overall, but also leads in Points Scored with 851 (141.8 per game.) This seems as obvious, as the more points you have, the more wins you have. So simple, I can grasp much of the concept. So my heart goes out to the Fevered Voorhees, who has the fourth overall lead in points with 817, but only has a 3-3 record, good for 152nd in the overall standings. 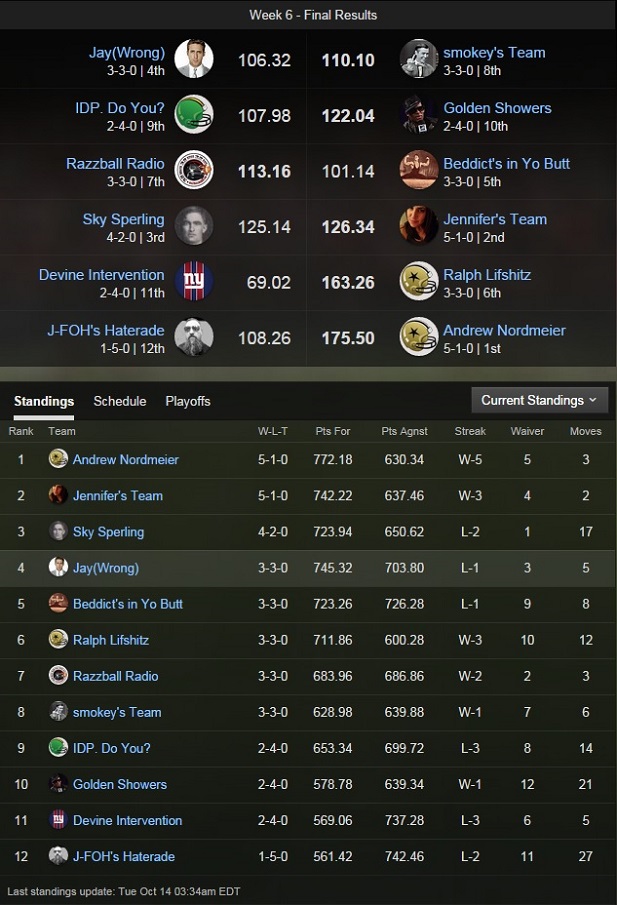 J-FOH, that’s the basement man. You want the lobby. No, that button. The one that has “L” on it. STOP HITTING P1! Seriously bro. And it looks like Tehol is right behind me, and may, in fact, be in my butt. Strange, I don’t really feel anything…