Whether it’s real or fantasy football, we see time and again the difference between winning and losing can come down to just one play. The Denard Robinson stat correction fiasco of last year’s playoffs caused a change in many a fantasy football result. Yet, few are as frustrating as an official’s call affecting player points, like holding on a TD run or offensive pass interference on a big gainer.

That got me thinking, did anyone suffer bitter defeat because of points taken away from Duke Johnson last week, when inexplicably, officials ruled Washington recovered the ball on a fumble that was never actually lost? I’ve yet to see it in the fantasy football universe, but if it happened to any of you out there, comment below. Regardless, like a mysterious recovery, we fumble through the Week 4 update… 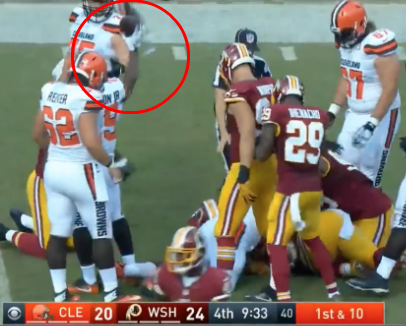 Sam’s Lobos of JB’s Labor Day Draft RCL and The Bloody Niners of Lord Hates Y! each climbed two spots from last week to first and second respectively in the rankings. The Lobos lead their league on points as they’re tied with Mike’s Team, our 15th ranked overall. Meanwhile, The Niners add Tom Brady this week to bolster an already strong unit of studs like Antonio Brown, LeSean McCoy and Demarco Murray… A little further down the board, big props go out to Stairway To Seven as the last unbeaten team from Work Hard Play Hard, our highest League Index at 102.1. They’re currently ninth overall and climbing after being out of the top 10 last week.

One of only 15 remaining undefeated teams is Yandy’s Tip-Top Team of Make RCL Great Again. Their RB-heavy approach and conservative view of roster moves (Just two transactions and two moves so far) have them one game ahead of The Great Corn Julio and Boozebags in the standings. A narrow victory over Smelly PirateHooker last week kept Yandy undefeated, but they’ll need to pick up the scoring to stay in front of the competition. They’ve taken advantage of the schedule, facing teams ranked seventh or lower in the standings. Still, a strong effort from Larry Fitzgerald in the Thursday Night game has Yandy out to an early advantage against Razz Boyzz this week.

The teams of 4th and Inches haven’t separated themselves much record-wise in this highly competitive league, but Gridiron Gang stands at the top of a 3-1 pack with a league high 520.04 points. A little more than 104 points differ between them and Kenny’s Team, the lowest scoring group so far, sitting in 11th place. The Gang picked up their third win of the year against winless The Brady Bunch behind a weekly high points total, and the highest weekly total of the season so far. Ben Roethlisberger and Julio Jones set the tone in this match-up, with Mark Ingram and Emmanuel Sanders doing some work as well. The struggle has been real for Brady Bunch this year. Three out of their four losses this season have been against their opponent’s season-high score.

In Razzball Writers League action, Lance’s Team stayed undefeated and jumped out to a league high 540.48 points following a blowout win over Spider 2 Y Banana. A.J. Green and Michael Crabtree had YUGE games for Lance, but it really didn’t take much to win because S2YB left two lineup spots open for the 2nd week in-a-row, and Carson Palmer got concussed during the game, hurting his score significantly… Jay suffered his 1st loss of the season at the hands of The Prime Minister, ironically because the London game start time must’ve caught Jay off-guard. Julius Thomas missed the game and created a hole in his lineup and fellow Jay (Ajayi) underwhelmed with only 5.6 points. The return of Le’Veon Bell sparked Prime to their largest margin of victory on the year.

Stay tuned next week for more RCL recaps, and if you learned anything from Duke Johnson last week, hold onto your balls – you never know what can happen.