Take a look at the rankings for the rest of the season and week’s 15 and 16 for opponent’s rush and pass defense below. The lower the number the tougher the opponent. 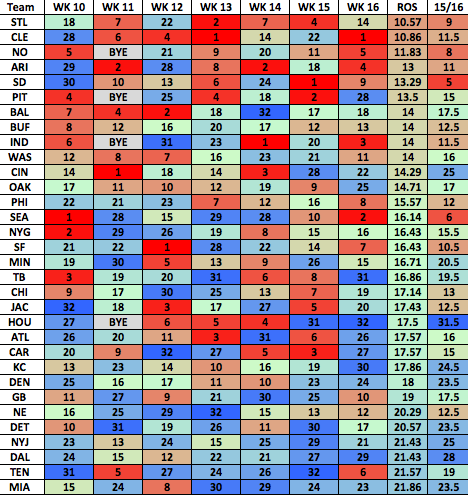 Miami has a nice schedule against the run, but of course their running back situation is a little muddled, but stashing Daniel Thomas is a good idea . . . If Chris Johnson can ever do anything of consequence he could possibly, maybe, do something with this schedule . . . I love me some DeMarco Murray and so does his schedule . . . Shonn Greene has a nice schedule, but I’m still not buying . . . Arian Foster has an amazing playoff schedule but a God-awful stretch before that. I think you’ll survive it . . . I’m warming up to Willis McGahee and his playoff schedule is stoking the fires . . .

Steven Jackson has played well recently and gets a decent game this week but has a tough road after this week . . . Ryan Mathews and Mike Tolbert may have trouble helping you win a championship with their tough playoff schedule . . . After Marshawn Lynch gets the Ravens this week he’ll have an easy-ish road until the playoffs . . . And you thought a Cleveland running back was going to lead you to the promised land . . . 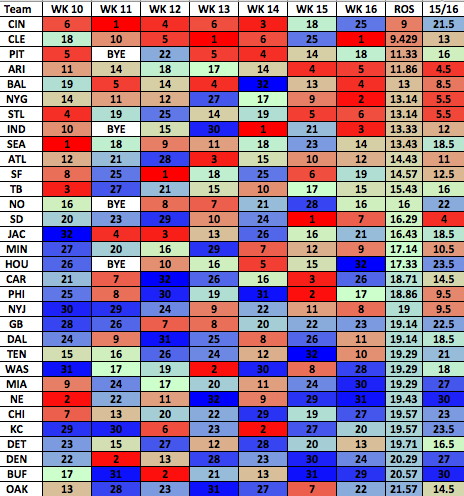 You just saw Carson Palmer throwing all over the field to Denarius Moore and they have a nice schedule to boot . . . Ryan Fitzpatrick and Stevie J have a nice schedule, but beware of the Buffalo weather . . . Tom Brady has the easiest playoff schedule; that ain’t fair . . . Jay Cutler has had some decent protection lately and gets Earl Bennett back and has a softish schedule . . .Timothy Tebow has a nice passing schedule, but he doesn’t pass all that much anyway . . .

Andy Dalton and A.J. Green have a rough stretch of games, but things magically get easier in the playoffs . . . Colt McCoy, nevermind . . . Big Benjamin has a rough row to hoe, but has been on point . . . P. Rivers has a nice stretch until the fake playoffs start . . . Eli Manning has a toughish schedule that gets a little tougher in the playoffs . . .