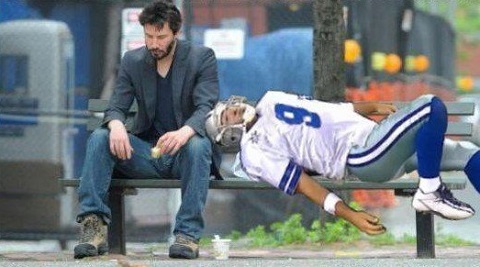 As Grey pointed out yesterday, I hope all of you had a great Thanksgiving. It’s my favorite holiday of the year, mostly because I cook, drink, and football the sh*t out of it. And, of course, it’s a day of thanks, so what better thing is there to do than to thank you, the Razzball community? Well, now that I think of it, I should probably thank your mom for that one thing at that one position that happened multiple times… But seriously, the truth is, I’ve been lucky to be given the opportunity to entertain, help, and interact with all you, and I love it. And all I have to do is fart and d*ck jokes all day long. That being said, after enjoying my extravaganza of a feast (I’d be happy to share my recipes in the comments if you’re interested), I will admit… I may have napped too long. When I woke up and saw the ending of the Eagles-Dallas game, I thought I slept right into December. In fact, Romo actually saw his shadow yesterday, confirming that Romocember has arrived early. There was also a Bears-Lions game that was captivating for about a quarter and then there was a Seahawks-49ers match-up featuring Jim Harbaugh and Pete Carroll. And I’ll admit, I hadn’t seen an interaction between two assholes like that since I watched Requiem for a Dream…

Matthew Stafford – 34/45, 390 YDS, 2 TD. Matt Stafford has a name that would work very well in a pictogram puzzle. It would essentially be just a floor mat, “hew” written out, and then a staff of some sort, ending with a Ford F-150.

Brandon Marshall – 6 REC, 42 YDS. This was the worst production by a Marshall since Renaissance Man. (Farts, leaves room.)

Riley Cooper – 4 REC, 32 YDS. Cooper likes most holidays, but he hates Black Friday with a passion.

Marshawn Lynch – 20 CAR, 104 YDS and 1 REC, 7 YDS. Do you ever think he ever marvels at how good he is at football? Or is it just because my mouth is full of Skittles?

Colin Kaepernick – 16/29, 121 YDS, 2 INT. Most teams avoid Richard Sherman, so it was a surprise to see Kaepernick throw the ball directly to him… twice.